The Rover P5 series, was a group of large saloon and coupé automobiles produced from 1958  until 1973. Models were marketed under the names Rover 3 Litre, Rover 3.5 Litre and Rover 3½ Litre.

The P5 was a much larger car than the P4 which in some respects it replaced. It was extremely popular with United Kingdom Prime Ministers and government officials of its day. Queen Elizabeth II is said to have favoured driving her P5.

The P5 appeared in September 1958, badged as the "3-litre". It was powered by a 2,995 cubic centimetres (182.8 cu in) engine. This straight-6 IOE engine used an overhead intake valve and side exhaust valve, an unusual arrangement inherited from the Rover P4. In this form, output of 115 brake horsepower (86 kW) was claimed. An automatic transmission, overdrive on the manual, and Burman power steering were optional with overdrive becoming standard from May 1960.

Stopping power came originally from a Girling brake system that employed 11-inch (280 mm) drums all round,but this was a heavy car and by the time of the London Motor Show in October 1959 Girling front-wheel power discs brakes had appeared on the front wheels.

The suspension was independent at the front using wishbones and torsion bars and at the rear had a live axle with semi-elliptic leaf springs.

A Mark I-A line, introduced in September 1961, featured a minor restyle with added front quarter windows, intended to "assist the dashboard ventilation". Under the metal, the 1A featured modifications to the engine mountings and the automatic transmission and hydrosteer variable ratio power steering as an option.

The Mark II version of the P5 was introduced in 1962. It featured more power,129 horsepower (96 kW), from the same '3.0 L' engineand an improved suspension, while dropping the glass wind deflectors from the top of the window openings which also, on the front doors, now featured "quarterlight" windows (Quarter glass in US English).

The most notable addition to the range was the option of the Coupé body style launched in autumn 1962. Unlike most coupés, which tend to be two-door versions of four-door saloons, this retained the four doors and was of the same width and length as the saloon, but featured a roofline lowered by two and a half inches (6 cm) along with thinner b-pillars, giving it the look of a hardtop. Hydrosteer was standard on the Coupe and optional on the Saloon.

The Mark III was presented at the London Motor Show in October 1965,described at the time as "even more luxuriously trimmed and furnished". It was again available in two 4-door body styles, coupé and saloon. The Mark III used the same engine as its predecessor, but it now produced 134 horsepower (100 kW). Externally it could be distinguished by the full-length trim strip along the body and Mark III badging; internally it replaced the rear bench seat with two individually moulded rear seats, making it more comfortable to ride in for four occupants but less so for five.

The final iteration of the P5 appeared in September 1967. Now powered by the 3,528 cubic centimetres (215.3 cu in) Rover V8 engine also used in the 3500, the car was badged as the "3.5 Litre", and commonly known as the 3½ Litre. The final letter in the "P5B" model name came from Buick, the engine's originator. Rover did not have the budget or time to develop such engines, hence they chose to redevelop the lightweight aluminium concept Buick could not make successful. They made it considerably stronger, which added some weight but still maintained the engine's light and compact features. The Borg Warner Type-35 automatic transmission, hydrosteer variable ratio power steering and front Lucas fog lights were now standard.

Output of 160 brake horsepower (120 kW) was claimed along with improved torque. When compared to its predecessor, the aluminium engine enabled the car to offer improved performance and fuel economy resulting both from the greater power and the lesser weight of the power unit.

The exterior was mostly unchanged, apart from bold '3.5 Litre' badging, a pair of fog lights which were added below the head lights, creating a striking 4 light array, and the fitting of chrome Rostyle wheels with black painted inserts. The P5B existed as both the 4-door coupe and saloon body style until end of production. Production ended in 1973, by when 9099 coupés and 11,501 saloons had been built.

The 3½ Litre saloon variant was a favourite of high-ranking Government Ministers, and served as Prime Ministerial transport for Harold Wilson, Edward Heath, James Callaghan and Margaret Thatcher. As testament to their suitability, the last batch of P5Bs to roll off the Rover line in June 1973 were purchased by the British government and placed in storage, to be released for government use as required: subsequently registered relatively new looking P5s were therefore still familiar sights in Westminster for more than a decade after production had ended.

When Margaret Thatcher entered Downing Street in 1979 after her election victory, she was driven in a 1972 model. It was during Thatcher's eleven-year tenure that the P5 was eventually phased out as a Prime-Ministerial car, in favour of the Jaguar XJ.

Queen Elizabeth II also owns an Arden Green Rover P5B Saloon "JGY 280", which is on display at the Heritage Motor Centre, Gaydon, Warwickshire and was seen in the 18 May 2003 episode of BBC motoring show, Top Gear.

In the 1970 film The Man Who Haunted Himself Roger Moore plays character Harold Pelham who is seen driving another Bordeaux red P5B at speeds well in excess of 100 mph (160 km/h) before crashing in a serious accident. Later in the film a replacement car is involved in a pursuit before being forced to crash through a bridge into a river.

Claire drives (and rolls) a P5B Coupe in the 1991 film Until the End of the World. It survives the rollover and she continues on her journey, with the aid of expanding foam to seal the windscreen.

A Bordeaux red coloured example is seen in the 2004 biographical film, The Life and Death of Peter Sellers.

In the 2007-2010 BBC series George Gently, Inspector George Gently (played by Martin Shaw) drives a Rover P5 Mark II. The quarter-pane windows are used when flicking cigarette ash out of the car. 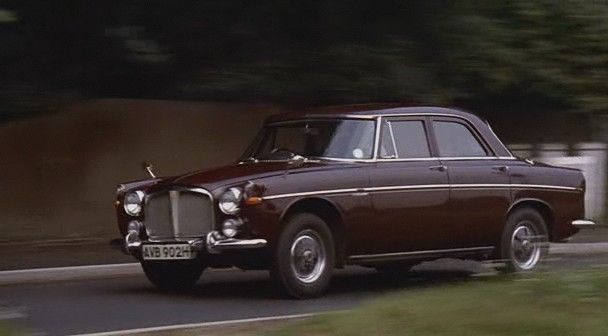