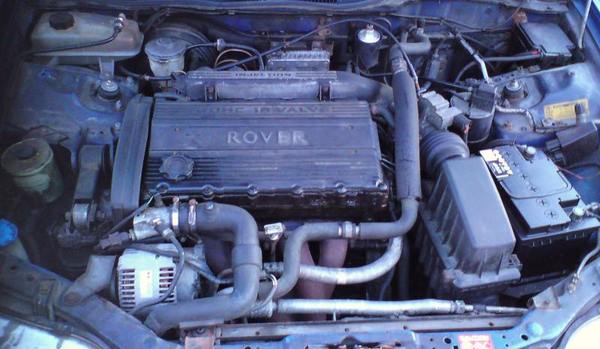 Several variants were produced for various models, but all had the same displacement. The naturally aspirated type produced 136 horsepower (101 kW), and turbocharged types were available with 180 and 200 hp (150 kW).

While the engine itself is capable of a great deal of power, its limiting factor was the PG1 Powertrain Ltd gearbox it was coupled with which could not handle the torque. Due to this the engine is electronically limited to a lower torque output than it is easily capable of, giving the engine a very 'flat' overall torque curve.

The Rover 620ti Turbo, 220 turbo coupé and 820 Vitesse all utilised the engine. The T-Series engine also found its way into limited-run Rover 220 3-door hatchbacks in GTi and later GSi trims and the 420 GSI turbo and GSI Sport turbo. The turbo versions now appear in the mg zr via custom conversions running 200bhp to 350bhp after forged internals.

The non-turbo engine also found its way into the short-lived and generally underpowered Land Rover Discovery 2.0i. Land Rover also fitted the same engine to a special batch of Defenders built for the Italian Carabinieri, which operated an exclusively petrol-powered vehicle fleet. A development vehicle was also built using a turbocharged version of the engine which far out performed the V8 production cars, but no room could be found for it in Land Rover's vehicle strategy.