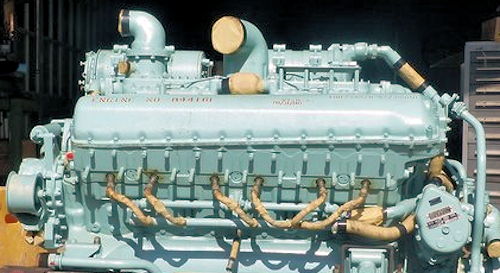 The Rolls-Royce Meteor comes directly from the Rolls-Royce Merlin aircraft engine, a V-12 cylinder gasoline engine with 60 ° cylinder angle and liquid cooling, the World War II, various British fighter aircraft ( Hawker Hurricane , Spitfire Mk.I-IX ), US American fighters ( Curtiss P-40 , P-51 Mustang ) and British bombers ( Handley Page Halifax , Avro Lancaster , De Havilland DH.98 Mosquito ). Later he also became some British and Canadian civilian aircraft such as the Avro Lancastrian or theCanadair North Star installed. For use as a tank engine, the Merlin was only slightly modified. The Merlin usual loader was omitted, the mixture preparation equipped with other carburettors and throttled the power depending on the version to 600 hp (447 kW) at 2000 / min and (later) 650 hp (485 kW) at 2200 / min. The last version Meteor M120 (also known as Fuel injected Meteor ) made with gasoline injection 810 hp (595 kW) at 2500 / min. This limitation of the power output to a balanced level brought a favorable torque curveand material-saving operation, which benefited the service life and reliability. Since, in contrast to the aircraft engines for tank engines, saving weight was not so critical, some of the more expensive Merlin's light metal components were replaced with those made of steel to keep production costs down. Nevertheless, about 80 percent of the components were identical to those of the Merlin aircraft engine, which in turn greatly simplified the production. The Rolls-Royce Meteor proved to be a successful conversion of a proven engine and was considered very reliable and easy to maintain. Due to its multiple use, it is one of the most successful tank engines ever.From the meteor comes again from the Rolls-Royce meteorite , a reduced to 18 liters V- eight -cylinder engine , which served the heavy armored transporter Thornycroft Antar as a drive.

Before the appearance of the Rolls-Royce Meteor , which was derived during the Second World War in 1943 from the V-12-cylinder Rolls-Royce Merlin , most British tanks were considered underpowered and often as mechanically unreliable. Unlike former British tank engines such as the Nuffield Liberty  under licenseof US aircraft engine Liberty L-12  from the cruiser tank C the meteor had a far greater capacity(about 27,000 cc), this was mechanically much less burdened, of course, had more power reserves, was due to its much more modern design as a flight engine speed-resistant and therefore compared in the end even far less sensitive. The biggest advance in all, however, was that the Meteor delivered twice as much power and was considered the first engine to provide British tanks with adequate engine performance with good mechanical reliability. Originally manufactured by Rolls-Royce itself, the production was outsourced after a short time to the company Leyland to Luton , so Rolls-Royce fully on the production of Merlin and GriffonCould focus on aircraft engines.

The engine came in its first version with an output of 600 hp (447  kW ) at 2000 / min in 1943 immediately in the new with up to 64 km / h (40 mph ) fast Cromwellcruiser with 75 -mm gun used. This enormous top speed (fastest British tank of the war) was limited a short time later due to suspension damage to 53 km / h and 33 mph. The Rolls-Royce Meteor allowed such high performance that the Cromwells the far heavier German tanks such as the Tiger and the Pantheroften escaped or could even outmaneuver them in various cases. Despite some full-throttle par force hunt on the battlefield or on the way there the machines always convinced by insensitivity and reliability. The Cromwell was taken out of service in 1950.

The Comet was the development of Cromwell, he appeared on the battlefield in April 1945, but could not play too large role because of the near end of the war in May. Even in this improved tank, which was only slightly heavier than its predecessor, proved the Rolls-Royce Meteor and this despite higher weight a (again limited) top speed of 51 km / h (32 mph). The Comet remained in the British Army until 1958 in use, in South Africa until 1970.

Still in May 1945, but too late for use in the war, the Centurion Mk.I was introduced as a heavy cruiser tank  This was the first British tank with really good armor protection and also had the Rolls-Royce meteor . The Centurion became the most famous British tank, as it was in many countries for a very long time after the war was in use and partly (although more or less extensively modernized) is still used today. However, the newer versions of the Centurion (originally designed as a heavy tank, but classified as a medium tank since the late 1950s) showed that it was equipped with its 51stTons of combat weight was not easy and the Rolls-Royce Meteor was no longer up-to-date as a power source. These newer versions, whose Rolls-Royce Meteor now made 650 hp, proved to be too slow with a top speed of only about 35 km / h and fuel consumption was quite high, especially after the weight of further boosting upgrades and combat value increases which never constrained any great reach anyway. In the following years were the original in many cases, Rolls-Royce Meteor - gasoline engines to more modern, stronger and more fuel-efficient diesel engines AmericanProduction (eg at the Swedish Centurion or at the Israel Centurions with the name Sho't ) exchanged. The South African Olifant Mk.1 , a proprietary enhancement of the Centurion, initially retained the Rolls-Royce Meteor , but with the help of a mechanical injection system in the performance was increased to over 800 hp. The later version Olifant Mk.1A received a diesel engine of state-owned production with 750 hp, from version Mk.1B even a turbo diesel engine with 900 or 950 hp.

In 1947 was also in experimental severe storm tanks / tank destroyer Tortoise (turtle) with 95-mm cannon ( 32-pounder ) of the Rolls-Royce Meteor built and surprisingly proved to be reliable, though this car was very heavy and extremely underpowered. With a weight of nearly 80 tons and a maximum speed of 20 km / h , the Tortoise was also slow and consumed a lot of fuel. This vehicle remained a prototype due to the limited practical combat value (only six).

The heavy main battle tank Conqueror with 120-mm-Kanone 1948 was the penultimate with the Rolls-Royce Meteor provided British armored vehicle. The Conqueror was despite the new engine version with gasoline injection Meteor M120 810 hp (595 kW) performed at a cruising weight of 66 tonnes at 34 km / h quite slow, which revealed for the first time that the Rolls-Royce Meteorwas near the end of his potential. He could therefore no longer be the first choice for future tank models. Also this new version could convince with good reliability (although that did not always apply to the power transmission), but the fuel consumption was very high and the range of the Conqueror with 165 to 65 kilometers rather low. Interestingly, this heavy main battle tank was due to its successful suspension construction despite higher weight compared to the Centurion this drive when driving off-road and off. The Conqueror was retired in 1966, with new combat increased versions of the Centurion took over his role.

The final British tank powered by the Rolls-Royce Meteor was the Charioteer (Official name: FV 4101 Charioteer tank destroyer ), used in the United Kingdom from 1953 to 1959 (20 units), then to Austria , Jordan , and Finland sold. This was a derivative of the Cromwell with new tower and a long 20-pound cannon (84 mm) from the Centurion Mk.3, which had been rebuilt in 200 copies for use as a tank destroyer . The Rolls-Royce MeteorProven in this armored vehicle, which was only slightly slower than the original Cromwell. The Charioteer was also the last of the Rolls-Royce Meteor powered tank, which came to a war effort (in 1978 in southern Lebanonon the part of the PLO against Israel at Operation Litani ). Due to its firepower and good performance as well as its reliability this vehicle remained with the Finnish armyin 38 copies until 1979 in use.

Bentley with the The 27-litre V12 Meteor engine 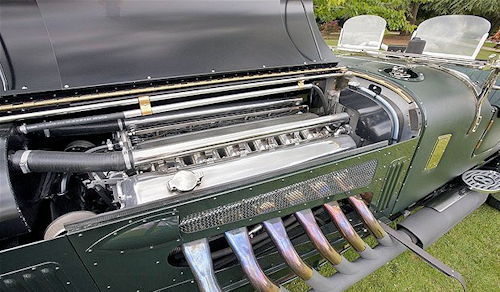