Renault uses Amédée Gordini to build a more efficient version. The "Sorcerer" then makes a little preparation, so was born the Dauphine Gordini (type R1091) in 1957 .

The power of the block increases to 33  hp DIN and the top speed to 126  km / h thanks to a new cylinder head , the increase in the compression ratio and the use of a 32  mm carburetor , springs harder valves and enlarged intake-exhaust ducts. The first modifications made by Amedée Gordini (vertical head) will however not be kept on the standard model for cost reasons.The gearbox changes to four gears and the body is lowered slightly. The tires are 145x380 instead of the standard 135x380.

Spanish manufacturer FASA to assemble at its plant in Valladolid  of Renault 4CV with bodies manufactured by Cointra body, In 1965, thanks to a relaxation of the Spanish rules, a stake in FASA which is renamed Fasa-Renault .In total, the production of Dauphine, 44,861 Gordini models produced from 1961 to 1967.

Argentina: IKA Dauphine I in 1959 to manufacture Renault models under license. The production of the Dauphine begins in July 1960 with the assembly of the first Dauphine adapted to the local road network. A more uprated version appears at the end of the year, named Gordini. and 34,566 Gordini made from 1960 to 1970. 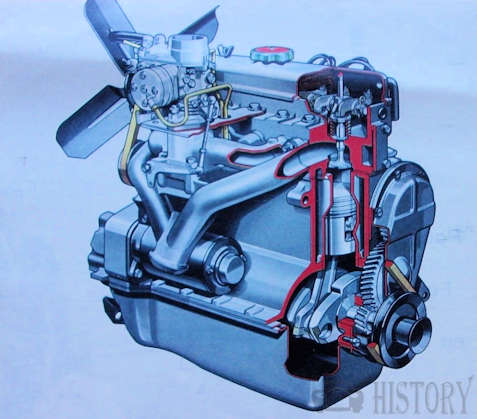 Externally, the 1093 differs from the Dauphine Gordini by its large diameter front headlamps (180  mm ) borrowed from the USA version, its two blue stripes (adhesive canvas) stuck in the axis of the vehicle and its initials 1093 on the back cover as well as on the right front fender for the 1962 series. The dashboard is made of beige anti-reflective metal for the 1962 version and frosted black for the 1963 version. Both versions have a mechanical tachometer (driven by a 'Jaeger' lighter plug) with yellow and red warning zone starting at 5500 rpm and 6000 rpm and a specific speedometer (tachometer) measuring up to 180  km / h .

The engine of the 1093 is the engine of the Dauphine Gordini whose power has been increased to 49 CV DIN (instead of 36 HP). This increase in power was made possible by the installation of pistons with convex head (compression ratio increased to 9.1), a twin- shaft carburetor Solex inverted type 32 PAIA 3 , a specific camshaft by modification of the intake phase, a work on the cylinder head (reduction of its height to 93.5 mm and a volume of the rooms reduced to 25 cm 3 instead of 27.3 cm 3 ), the valves are with double springs and it is mounted a direct tubing of admission - exhaust of Autoblue brand. To cope with this increase in power, the distribution gears are reinforced as well as the clutch (Ferodo type PKH 5/2). The cooling radiator is in copper bundles instead of being steel. The 1093 was sold for a maximum speed of 140 km / h.

1093 is equipped with a box of 4-speed specific speeds (including 3 synchronized) derived from the standard box 318 of the Gordini ( 4 e slightly longer).

The braking system is the original one with drums, but the hot resistance of braking is improved by the mounting of specific front drums with cooling fins.

The suspension is that of Dauphines exports type "bad roads" but with shorter springs. The 'bad roads' suspension was characterized by the adoption of front suspension springs with higher taring, a front torsion bar of 12 mm instead of 8 mm and the mounting of a front landing strut bar. The 'bad roads' equipment also included the fitting of a fuel tank protection plate.

The 1093 is the only Dauphine (except the "Ferlex" and automatic "Jaeger" semi-auto clutch versions) to have been marketed in France with 12-volt electrical equipment similar to exports (USA) instead of the 6-volt version. 'origin.

Despite its very sporty character for "mister everyone", the "serial 1093" could not be competitive without being prepared. The preparation was to modify and polish the existing mechanics because the new sports regulations in force since 1960 prohibited any increase in engine capacity and changes of parts. Ferry took care of many competition Dauphine 1093 that became "1093 improved".

The 1093 is the most sought after of all the Dauphines. Today, it is estimated that a hundred hundred of 1093 have survived, half of which are in working order. Only one Dauphine 1093 has been known to date (2016) in perfect working condition in its original state without having been restored (Perhaps there are others at the back of garages or private collections?)

In 1962 , the Dauphine 1093 won the Tour de Corse rally . However, its late launch and the modest modifications did not allow for a long sporting career. The 1093 remains an endearing car that ensures the transition between the 4CV 1063 craft and the R8 Gordini, which will revolutionize the "series tourism" automobile competition.

Pierre Ferry is an engineer, motor racing enthusiast who runs in 4CV at the time. With the arrival of Dauphine Gordini, he changes his mount and takes the opportunity to make some changes:

Ferry even built for Dauphine engine of 1000  cm 3 based on the original motor. The new power of nearly 80  hp allowed to reach 180  km / h . He also designed a large number of parts such as oil pans or camshafts.