The Renault Alliance is a subcompact automobile manufactured and marketed in North America by American Motors Corporation (AMC) for model years 1983-1987. It was available in two and four-door sedan configurations with a convertible added in 1985. The Alliance was also the basis of the three or five-door hatchback Renault Encore that was added in 1984. AMC also marketed a sports version called Renault GTA for 1987. A total of 623,573 vehicles were manufactured in Kenosha, Wisconsin. Production was discontinued after the acquisition of AMC by Chrysler in 1987.

The Alliance and Encore derived from AMC's partnership since 1979 with Renault, which held controlling stake in the smallest U.S. automaker. The Alliance and Encore were essentially the Renault 9 & 11 re-engineered for the U.S. and Canadian markets. The cars featured exterior styling by Robert Opron, director of Renault Styling. The interior design was by AMC's Richard Teague and the Alliance two-door sedan and the convertible were unique models developed by AMC.

Competition from the "Big Three," the rise of Asian import automobiles, new safety regulations, the 1973 oil crisis and 1979 energy crisis left American Motors in a weak position in the U.S. marketplace. The company had three product lines: a profitable line of government vehicles, Jeeps, and passenger cars. However, when sales dropped suddenly in 1979 and all of the U.S. automakers saw their sales plummet, AMC faltered.

Banks refused to provide AMC further credit to develop new products for the changing marketplace, so AMC turned to Renault for a $90 million loan. As the U.S. economy entered the early 1980s recession, AMC signed an agreement with Renault giving a share in AMC's ownership in exchange for the rights to sell Renault cars in the U.S. By the end of 1980, Renault held a controlling interest of AMC. Some called it "Franco-American Motors," a pun on the French-American combination and the Franco-American food company.

With the United States dollar then relatively weak against the French franc, manufacturing in the U.S. seemed the best way to grow especially since fuel prices were rising and the major U.S. carmakers had yet to bring out large numbers of small, fuel-efficient cars. Renault's objective was to build its newer models at AMC's existing manufacturing plants, thus avoiding the problems Volkswagen encountered with its "Rabbit" version of the Mk1 Golf assembled in its new factory in Westmoreland, Pennsylvania.

The two automakers worked closely as each design studio developed spin-offs of cars created by the other. Richard Teague, AMC's Vice President of Design, and his French counterpart, Robert Opron, director of Renault Styling, each traveled between France and the U.S. at least three times a year.Originally only a four-door sedan body style, Teague and AMC's design staff decided to mock-up a two-door coupe just before Opron was to review the work of the American team.

Renault executives came in to run things alongside AMC officials, and the former Nash Motors factory in Kenosha, Wisconsin was retooled to produce an Americanized version of the European Renault 9 subcompact under the "Alliance" nameplate.Consumer clinics were conducted between 1979 and 1982 using a fiberglass mockup (and later with actual cars) to evaluate various issues that concerned AMC officials. Market research indicated that consumers preferred the Renault name over AMC, though not strongly. The model was named the Renault Alliance, with the AMC logo only on a small sticker affixed on the inside of the rear window, as well as printed at the bottom or back of the advertising materials.

Production began in 1982, making Renault the second European automaker to build cars in the U.S. The cars were aimed at the lowest price range in the U.S. market, the Alliance had a sticker price starting at $5,995 (US$14,195 in 2014 dollars

For context of the era, the Alliance was launched into the U.S. subcompact market segment that included the Chevrolet Chevette, a basic and dated rear-wheel drive car; the Toyota Corolla E70 with a good reputation, but also still featuring an outdated design and rear-drive layout, the Volkswagen "Rabbit", the first-generation replacement for the original Beetle; and the simple Honda Civic (second generation) with a high rating and a matching high price

The Alliance was a 2- or 4-door sedan, launched in June 1982 as a 1983 model after a US$150 million overhaul of AMC's Kenosha, Wisconsin, assembly plant. Although it was branded as a Renault, the car bore AMC's logo on a rear window decal and was officially classified as a domestic automobile because it had more than 70% U.S.-produced parts.

The Alliance was a modern front-drive sedan with a 163.8-inch (4,161 mm) overall length on a 97.8-inch (2,484 mm) wheelbase featuring a thrifty, transverse four-cylinder engine. The Alliance had a long list of standard equipment and achieved 37 miles per US gallon (6.4 L/100 km; 44 mpg-imp) in city driving. Fuel economy on the highway with the 5-speed manual transmission approached 60 mpg-US (3.9 L/100 km; 72 mpg-imp). It was a sensible car for a post-oil crisis period in which good fuel economy was highly prized.

The Alliance used a Renault supplied OHV 1.4 L I4 engine from the Renault Le Car. Cars sold in 49-states came with a Renix throttle-body fuel injection, while California emissions standards required the use of multi port injection. This proven four-cylinder was upgraded with the latest electronics that included an electronically controlled fuel system, a digital ignition system, and a microprocessor to manage the optional three-speed automatic transmission. Although Renault transmissions have been equipped with Renix based electronics and sensor assemblies, the all-new electronic controlled transmission system in the Alliance was an innovation to the U.S. mass-market.

Power went through either a four-or five-speed manual, or a three-speed automatic transaxle. The base engine produced 64 hp (48 kW; 65 PS) to accelerate the 2,030-pound (921 kg) Alliance from 0 to 60 mph in a leisurely 14.3 seconds, and gave it an 89-mile (143 km) top speed. Steering was rack and pinion. The suspension system was fully independent via MacPherson struts in front, while the rear had a compact and ingenious system of transverse torsion bars and trailing arms. At just under 2,000 pounds (907 kg) for the base model, the Alliance was also the lightest car assembled in the U.S. in its time.

The Alliance was slightly smaller on the outside than the competing first-generation Ford Escort (North America), but it was somewhat bigger on the inside where it looked larger and more inviting. Interior space was good for four or occasionally five people, in part due to a cleverly engineered front seats—where each seat was mounted on a 9-inch (229 mm) wide central rail (rather than two side tracks) allowing for copious rear foot room on either side of the rail. In addition to the usual recline and fore-and-aft movements, the upscale DL models included a curved track that allowed the seat to be adjusted along the arc to find the most comfortable position for driver and passenger.

The Alliance sold well with over 142,000 of the debut 1983 models. Sales were limited by the availability of only two body styles. American Motors' had several 4-door Alliances converted into stretch limousines for publicity and official use.

American Motors introduced a companion model called Encore featuring a hatchback in both two- and four-door versions. The new derivatives featured a redesigned rear end and were 3.2 inches (81 mm) shorter than the Alliance sedans. "More versatile and a little more luxurious than the Alliance," the marketing objective of the Encore was to attract younger and more "upscale" customers, but they were really the same cars. California engines featured a Bosch LU multi-point fuel-injection system. The 1984 models introduced innovative electronics that included an infrared remote power locking system, a "Systems Sentry" monitoring fluid levels, as well electronically tuned sound systems.

Bolstered by the additional two- and four-door hatchback models, sales increased to over 208,000 for 1984.

However, the new Encores were introduced just in time to encounter a sag in the small-car market because as fuel prices fell, consumers began to drift away to larger automobiles, leaving the Renault-based models to scramble against low-priced Chevrolet Chevettes, Ford Escorts, the Dodge Omni and Plymouth Horizon twins, as well as a slew of Japanese imports.

The 1.7 L fuel injection (EFI) engine with 5-speed transmission was introduced in 1985 as optional on all versions except the base model. It developed 96 pound-feet (130 N·m) of torque at 3000 rpm and 77.5 hp (58 kW; 79 PS) at 5000 rpm. Designed to be either gasoline of diesel, the new five main bearing engine was torture tested to higher levels than normal to be "the strongest Four in the industry." The fully pressurized cooling system eliminated corrosive oxygen while engineers reduced the number of connections to avoid coolant leaks for both the 1.7 and 1.4 engines.

In addition to the sedan, the Alliance was now offered as a convertible for 1985 (AMC's first of this body type since the 1968 Rebel). The design was in collaboration with American Sunroof Company (now American Specialty Cars) that reinforced the Alliance's unibody for torsional rigidity during manufacture in Kenosha, Wisconsin.

Potential buyers were asking at AMC/Jeep/Renault dealerships for an Alliance-based station wagon, who pointed them toward the larger Renault 18 Sportwagon.

Improving economic conditions and lower gasoline prices meant total sales dropped to 65,000 in 1986. American Motors had already stopped production of the Concord and Spirit in 1983 (the four-wheel drive AMC Eagle continued to be built), while the larger Medallion (to replace the Renault 18) was not going to be ready until 1987.

A separate model was added for the 1987 model year, the GTA that offered higher performance and its name recalled the Alpine GTA. All models received a front end facelift and featured new headlamps. The remainder of the Alliance line was carried over, but the two Encore hatchback body variants were renamed the Alliance Hatchback.

On March 9, 1987, Chrysler agreed to buy Renault's share in AMC, plus all the remaining shares, for about US$1.5 billion (US$3,113,796,134 in 2014 dollars) and AMC's operations became the new Jeep-Eagle division of Chrysler. The focus of the acquisition was on the highly profitable Jeep vehicles and the brand-new Brampton Assembly plant that was just built in Ontario, Canada. However, Chrysler saw itself "saddled with a largely unsuccessful assortment of cars" including imports from Renault.Moreover, the Alliance line of passenger automobiles did not fit in Chrysler's existing product mix. The final year saw only about 35,000 Alliances sold in 1987.

The Renault GTA was a performance version of the Alliance for the 1987 model year. It was manufactured during 1986 and early 1987 as a limited production, specialty model. It was described as "dandy little sports car" and a "pocket rocket" defined as a low-priced "car based on high production economy but with emphasis placed on appearance, performance and handling." It replicated what Volkswagen had done when the Rabbit was upgraded into the GTI.

The GTA was available in 2-door sedan or convertible versions, with a single powerplant: a 2.0 L fuel-injected 4-cylinder engine. At 4900 rpm with premium U.S. gasoline, this engine developed 95 hp (71 kW; 96 PS). Driving performance of the vehicle included a 10.2 second mark for 0 to 60 mph and a .89 g-force cornering rating in road tests conducted by Car and Driver magazine.

Road test of the GTA described it to be quite comfortable with responsive handling that "was particularly impressive on tortuous back roads. It just hung in there like a sports car under the most trying conditions ... Hard acceleration will usually result in spinning wheels and a good deal of torque steer."

The GTA served as "last-ditch" sales boosters for the economical Alliance line. However, the models were discontinued when Chrysler bought AMC and Renault pulled out of the U.S. market. 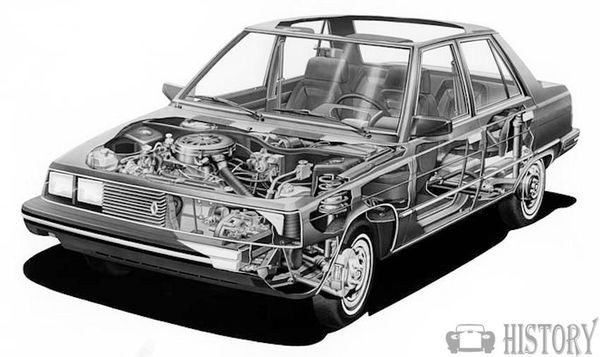