The Reliant Kitten is a small economy car which was manufactured from 1975 to 1982 by the Reliant Motor Company in Tamworth, England. It has a glass fibre body and an 848 cc all-aluminium inline-four engine, providing economical performance.

The rear section of the Kitten's chassis is essentially the same as the Reliant Robin or Reliant Rialto, however from the middle forwards the car is significantly different, with the engine moved forward to where the Robin's front wheel is, and a Reliant-designed (but Lotus inspired) double wishbone front suspension. Moving the engine forward, compared with the three-wheeled cars, made a lot more room inside for the driver and front passenger. The Kitten's chassis, engine, and running gear are shared (with minor modifications), with the Reliant/MEBEA Fox pickup introduced in 1979.

In October 1976, a year after introduction, a new de luxe version of the Kitten, branded as the Kitten DL, was announced.Improvements included revised springs and dampers and a changed anti-roll bar. The engine received carburettor and air filter modifications, claimed to give better cold start characteristics, while interior improvements included more comfortable seats, modified door trims incorporating a map pocket, and a new style tray to cover the luggage space behind the back seat. 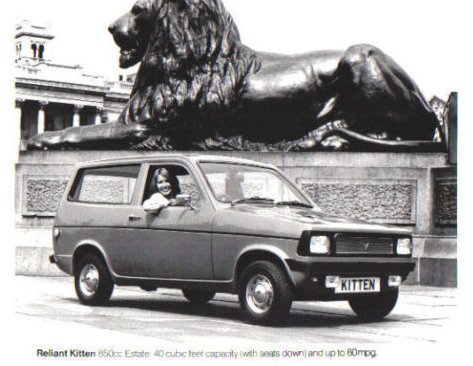 On 1 December 1976, a van version of the Reliant Kitten was announced, sharing the profile of the Kitten Estate but with blank panels in place of the windows behind the B-pillar. 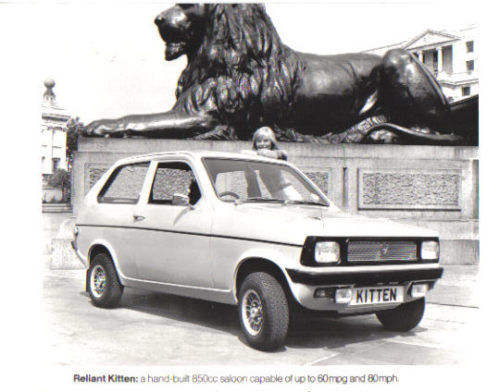 In 1982 the Kitten was axed due to not being able to compete on price with other models such as the Mini, due to its hand-made fibre glass shell. The corrosion of monocoque steel bodied competitors (the absence of which providing a strong selling point of the Kitten), which had been such a problem in the 1970s, was coming under control with advances in rustproofing. Also, the Kitten's rear-wheel drive layout was being abandoned in mass-market cars at this time in favour of a trend for transverse front wheel drive. Because it had four wheels, the Kitten also did not share the advantage of a lower UK road tax rating with the three-wheeled Robin. 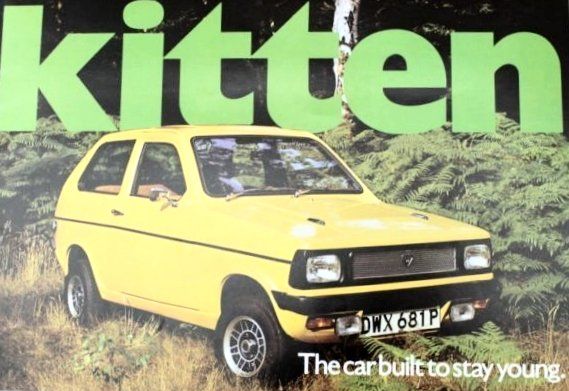