The Porsche 914 or VW-Porsche 914 is a mid-engined, targa-topped two-seat roadster designed, manufactured and marketed collaboratively by Volkswagen and Porsche from 1969 to 1976.

By the late 1960s, both Volkswagen and Porsche were in need of new models; Porsche was looking for a replacement for their entry-level 912, and Volkswagen wanted a new range-topping sports coupe to replace the Karmann Ghia. At the time, the majority of Volkswagen's developmental work was handled by Porsche, part of a setup that dated back to Porsche's founding; Volkswagen needed to contract out one last project to Porsche to fulfill the contract, and decided to make this that project. Ferdinand Piëch, who was in charge of research and development at Porsche, was put in charge of the 914 project.

On March 1, 1968, the first 914 prototype was presented. However, development became complicated after the death of Volkswagen's chairman, Heinz Nordhoff, on April 12, 1968. His successor, Kurt Lotz, was not connected with the Porsche dynasty and the verbal agreement between Volkswagen and Porsche fell apart.

In Lotz's opinion, Volkswagen had all rights to the model, and no incentive to share it with Porsche if they would not share in tooling expenses. With this decision, the price and marketing concept for the 914 had failed before series production had begun. As a result, the price of the chassis went up considerably, and the 914/6 ended up costing only a bit less than the 911T, Porsche's next lowest price car. The 914/6 sold quite poorly while the much less expensive 914/4 became Porsche's top seller during its model run, outselling the Porsche 911 by a wide margin with over 118,000 units sold worldwide.

Volkswagen versions originally featured an 80 PS (59 kW) fuel-injected 1.7 L flat-4 engine based on the Volkswagen air-cooled engine. Porsche's 914/6 variant featured a carbureted 110 PS (81 kW) 2.0 L flat-6 engine from the 1969 911T, placed amidships in front of a version of the 1969 911's "901" gearbox configured for a mid-engine car. Karmann manufactured the rolling chassis at their plant, completing Volkswagen production in-house or delivering versions to Porsche for their final assembly.

The 914 was Motor Trend's Import Car of the Year for 1970. A 914/6 GT piloted by Frenchmen Claude Ballot-Lena and Guy Chasseuil won the GTS class and finished sixth overall at the 1970 24 Hours of Le Mans. Brian Redman used the 914/6 to scout the course in practice runs of the 1970 Targa Florio circuit.

Two prototype 914s, dubbed 914/8, were built during 1969. The orange 914/8 was the first constructed, at the instigation of Ferdinand Piëch (then head of the Racing Dept), to prove the concept. Powered by the full-blown, 310 hp (222 kW) 908 [flat-8] racing engine, it was based on a surplus 914 handbuilt development prototype bodyshell (chassis no. 914111), hence the many differences from the standard vehicle (e.g., the quad headlights). The second, silver, road-registered car, powered by a carburetted and detuned 908 race engine making 260 hp (194 kW) was then prepared as a gift to Ferry Porsche on his 60th birthday. Also based on a spare prototype shell (chassis no. 914006), it was much closer to the standard car in detail. By all accounts Ferry didn't like the car very much and it sits in the Porsche Museum. Neither car saw a racetrack except for the purposes of testing. The 914/8 was not considered for production as a regular model. Another factory prototype, a 914/6 (chassis no. 914114) surfaced in the US in 2001. Together with a surviving prototype Sportomatic 914/6 (chassis no. 914120), reputedly in Southern Germany, they form a unique and fascinating piece of Porsche history.

Planned for the 1972 model year, the Porsche 916 program was cancelled after eleven prototypes with aerodynamic front and rear bumpers and either the 2.4 engine from the 911S, or the 2.7 from the Carrera. They were also to have a fixed steel roof, wider wheels, double grilled engine lid, and flared fenders as styled from the 914-6 GT cars. Ventilated disc brakes were fitted to all four wheels, and also a "mid-engined" version of the then-new 915 transmission, giving a conventional shift pattern with 1 to 4 in an H and fifth out on a limb. One 916 was built to US specs and on delivery to the USA was fitted with air conditioning by the dealer (Brumos). 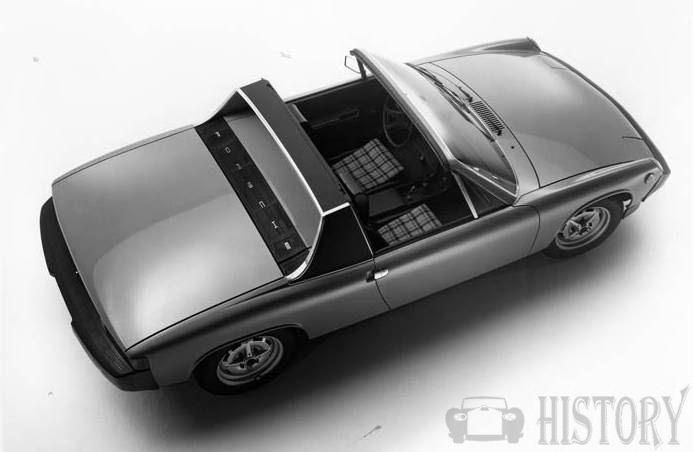 Over the six model years, Porsche made a number of changes to the 914. Some of these changes were cosmetic and others were in response to changing crash protection standards. From 1970 to 1974, the 914 was offered with chrome or painted bumpers. In early 1970, rear bumpers were produced with a straight crease on either side of the license plate indent. Between 1970 and 1972, both front and rear bumpers were smooth without bumper guards. In 1973, bumper guards were added to the front of the car. In 1974, guards were also added to the rear bumper. In 1975 and 1976, the chrome or painted bumpers were replaced with heavy, rubber-covered units.

The headlight surrounds were white from the first 914s to mid-production of 73 and subsequently black. Cars produced up to early 1972 had a fixed passenger seat and a removable passenger footrest. Later cars featured a movable passenger seat. Other interior differences included changing vinyl designs, gauge appearance, and air vent configurations in the dash.

In 1974, Porsche produced a series of Limited Edition cars for the North American market to commemorate Porsche's victories in the Can Am racing series, and were equipped with unique color schemes and came standard with otherwise optional equipment. The factory is said to have produced about 1,000 of these vehicles, about 50% Bumblebee and 50% Creamsicle. Variants of this series were manufactured and distributed in very limited numbers to European markets and Japan.

The Bumblebee: Featuring a black exterior (paint code L041), these cars sported Sunflower yellow trim (paint code L13K). Black body paint color was always an additional cost special option on standard 914 Porsche cars, but was included as a standard component on the black 914 LE cars. All but one photo of the 914 Porsche Can Am prototype cars are Bumblebee cars. The black-based 914 LE color scheme is unique to the 914 LE cars and has no precedent with the Can Am race cars or the 1973 911 Carrera RS series cars. The majority of 914 Limited Editions seem to be Bumblebees. 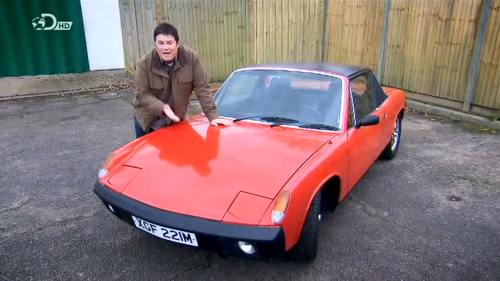