The first Plymouth Duster was a semi-tailback variant of the model Valiant , which Chrysler produced under the brand name Plymouth from 1970 to 1976.

The Duster competed against Ford's smaller hatchback Maverick , which was introduced in 1970. The Maverick replaced the Ford Falcon , which had competed with the Plymouth Valiant. The Maverick was a four-door, not the Duster. The Duster was born out of the desire of the Plymouth design department to use the money accumulated in 1970 for the overhaul of the Valiant for something more sparkling than just a new two or four-door Valiant. Under critical scrutiny from the management, engineers and designers at Plymouth created a notchback coupé reminiscent of the Valiant that offered the desired modern look on the old chassis. The Duster should also close the gap, which is based on the Valiant first Barracuda left behind. When the Pony Car Barracuda moved from the A- to the new E-platform in 1970, he left a gap in the model range, which had to be filled with a compact sports car. The Duster filled this gap and thus contributed to the failure of the new Barracuda on the E-platform.

From the Duster there were numerous variants, which emphasized rather times the profitability, then again the load ability or the driving achievements. This led to model names like Feather Duster , Gold Duster , Space Duster or Duster Twister .

1970 Plymouth unveiled the new model, which the 1969 concept car Duster I was based. In front of the bulkhead, the Duster looked like Valiant's, but the rest of the car was very different from the saloon. He had a half-tail roof and a special rear end plate with double horizontal taillights. Only in model year 1970 had the cars on the front fenders above the inscription "Duster" a small "Valiant" lettering.

The 1970s Duster was available in two versions: the Duster Standard and the more powerful Duster 340 . As drive were in addition to the 3.2-liter Chrysler slant6 straight-six and a 3.7-liter version of the same engine two Chrysler LA V8 engines with 5.2 liters and 5.6 liters displacement available.

From the middle of the model year, there was the equipment package Gold Duster for the standard model. The Gold Duster existed only with the 3.7-liter or the 5.2-liter engine. In addition, the car had "Gold Duster" lettering, gold stripes and other luxury features. A total of 217,192 Dusters were sold in 1970, of which 24,817 copies with the large 5.6-liter engine.

The Duster was so successful for Plymouth that in 1971 Dodge wanted and got its own version of the car, the Demon . In return, Plymouth got a version of the two-door hardtop coupe Dodge Dart Swinger, which was called Plymouth Scamp .

In 1971 there were only small changes at the Duster. The "Valiant" lettering and the "Plymouth" badge on the grille disappeared. A new equipment package called Duster Twister was introduced. The Duster Twister showed the aggressive appearance of the Duster 340, but had only insurance-friendly six-cylinder engines or a maximum of the small V8 with 5.2 liter capacity. The equipment package also included special side stripes that mimicked the stripes of the Duster 340, a matte black bonnet and the particularly "serrated" grille of the Duster 340. On request there were two non-functional hoods on the hood and a rear spoiler, as well as bucket seats and double exhaust pipes.

Also in 1972, the Duster was not changed significantly. New, stronger side lights replaced the previous bodywork, the taillights were slightly changed and the engine layouts adapted to the more stringent emissions regulations.

Like the Valiant, the 1973 Duster got a new bonnet, a new grille and new taillights. The previous models had double taillights on each side; the new ones had only one rear light housing for each side. In the midst of the first oil crisis , 1974 was the Duster's best sales year with over 277,000 units.

In 1974, Plymouth replaced the 340 with a 360-speed engine (5.9-liter displacement), which, however, developed less power because of the stricter emission regulations.

In 1976, the Feather Duster was a design success; he had many lightweight components, such. As the intake manifold, the bumper holder, trim parts on the hood and boot lid, and the housing of the manual transmission. This had the 225-in-six (3.7 liter displacement) trimmed for economy, an exhaust system with very low back pressure, a long rear axle ratio and it was either with a three-stage Torqueflite automatic or a manual four-speed transmission with overdrive (type A833OD ). The car had (along with the identical Dodge Dart Lite) by far the lowest fuel consumption in its class. There was also a version called Space Duster, which had reversible rear seats and a large trunk with 1350 l content. This year, the Duster 360 was one of the few vehicles on the market with a high ratio of engine size and vehicle weight. In 1976, the special model Duster "Spirit of 76" was introduced, as a counterpart to the Dodge Dart Hang Ten, with features such as red-white-blue seats.

Resurrection of the name Duster

Duster first reappeared for a package of equipment for the 1979 / 1980s Plymouth Volare Coupe, later on the 1985-87 front-wheel drive Plymouth Turismo and finally on the 1992-94 Plymouth Sundance coupe and hatchback coupe with Mitsubishi V6 engines. 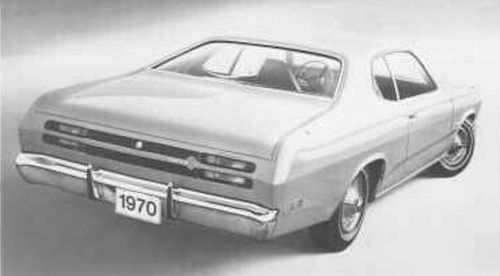