The Plymouth Cricket was a 1971 to 1973 by the US automakers Plymouth offered small cars . It was a US-approved Hillman Avenger .

As small cars imported in the USA became more and more popular, the major US automakers entered the market for model year 1971. Ford and GMC brought specially developed models, the Pinto and the Chevrolet Vega . Chrysler, however, sat on the renaming (Rebadging) of existing small cars from Japan and Great Britain . The basic model for the Plymouth Cricket came from the then part of the Chrysler Group Rootes Group .

The first shipment from the United Kingdom reached the United States on November 20, where it was sold as a 1971 model year. The adjustments included headrests integrated in the seats , four round lights as headlamps and the elimination of the weaker engine. Offered was a 1.5-liter four-cylinder with overhead camshaft and 70 bhp (52 kW), which optionally transferred via a manual four-speed gearbox or a three-speed automatic transmission, the force on a rigid rear axle . On the four-door hatchback sedan followed in 1972, a five-door station wagon .

The name Cricket was chosen to benefit from the success of the VW Beetle , but the cricket was anything but a success for Plymouth. The new car was plagued by a number of teething troubles and suffered from poor rust prevention. From 1972, cricket was no longer imported, with the vehicles of the 1973 model year, it was only sales of the previous year. The exact number of sold copies is unknown; In 1971/72 41,564 pieces were sold.

Cricket came too early into the US market in two ways: the model was not mature enough in 1971, and a later model launch would have allowed Chrysler to identify and fix any issues that might arise. Before 1973, small cars in the US were difficult to sell, only the 1973 oil crisis caused a rethink, but that came too late for the already set cricket.

In North America, the Avenger was sold as the Plymouth Cricket through Plymouth dealers as a captive import. The car was essentially an example of badge engineering and Plymouth made few changes to it. Only the 4-door saloon and 5-door estate variants were ever offered, due to the 2-door Avenger being unavailable at the time. It had 9.5" front disc brakes and 8" rear drums. Brochures included a cartoon cricket.

A Chrysler Plymouth press release dated 30 June 1970 stated that the Cricket was going to be shown to the automotive press for the first time in November 1970. The first shipment of 280 Crickets from the UK arrived in the U.S. on 20 November 1970. Another press release issued on 23 February 1972 stated that the "station wagon" version was going to début in early spring of 1972.

Differences from the Avenger

Due to American federal laws regarding headlight design, all Cricket models regardless of trim level used the round four-headlight grille of the GL and GT model Avengers.

Demise of the Cricket

The Cricket was discontinued midway through the 1973 model year, despite the gas crisis of 1973 seeing a sharp increase in demand for small cars and despite the fact that Dodge began to see real success with its similarly-sized Dodge Colt, built by Mitsubishi Motors.

The Cricket name lived on in Canada, however, as Chrysler Canada replaced the British-built Cricket with a rebadged Dodge Colt in mid-1973 model year. The Cricket's version of the Colt GT was called the Cricket Formula S. For the 1975 model year, the Plymouth Cricket was rebadged as the Plymouth Colt. Thus began Chrysler Canada's dual marketing system, selling the Colt as both a Dodge and a Plymouth. The later Plymouth Arrow was similarly sold as a Dodge Arrow.

The last British-built Crickets were exported to the U.S. in the later part of 1972, but were sold until mid-1973 as "1973" models. This was because U.S. safety and emission laws became effective based on the calendar year the car was manufactured in or imported in, as opposed to the model year. Chrysler used this loophole to continue selling what were essentially 1972 cars through 1973 as 1973 models 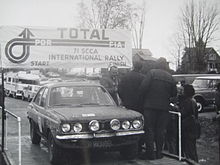 Plymouth Cricket, winner of the 1971  Rally