The Opel Senator B is a four-door sedan based on the Opel Omega A . It was introduced in May 1987 and was available from September 1987.

In the United Kingdom, the Senator A was sold as a Vauxhall Royale with right-hand drive, the Monza called the Royale Coupe . Only Senator B was also offered in the UK as the Vauxhall Senator .In Australia, the senator with 3.8-liter V6 engines of Buick and with 5.0-liter V8 engines from Holden offered. The models were called Commodore and Statesman . As part of a cooperation with Toyota on the Australian market, the Holden Commodore was also under the brand name Toyota Lexcen , but only with a 3.8-liter V6 engine.

Initially, the adopted by Senator A 3.0-liter injection engine without catalyst with 130 kW (177 hp) and also from this well-known 3.0-liter injection engine with regulated catalyst and 115 kW (156 hp) were available. In early 1988, a more powerful 3.0-liter variant with regulated catalyst and 130 kW (177 hp) was added.In addition, the 2.5 kW injection engine 103 kW (140 hp) from the predecessor was also available for export. In some countries, the Senator B was also offered with a 2.3-liter turbo diesel. The Opel tuner Keinath made a few copies of a two-door convertible.

In May 1993, the production of Senator B ended after six years of construction and 69,943 manufactured copies made.

The Senator B is compared to the Omega A with unchanged wheelbase 15.8 cm longer, 0.9 cm narrower and 0.5 cm higher. The body of the Senator B is aerodynamically shaped. A distinguishing feature of the Senator B is in particular the large radiator grille, whereas the Omega A has a smooth front with a narrow cooling air inlet. The rear wheel cutouts in Senator B are round rather than angular. The rear triangular side windows are larger in Senator B than in the Omega A. The front turn signals are not located next to the headlamps but below the bumper next to the fog lights. From the Omega A, the Senator B still differs by large, divided taillights. Of this, half is integrated in the tailgate.  The rear lights of the Senator B were also of Bristol Cars for the 1993 to 2008 produced sports car Bristol Blenheim.In contrast to Senator A, the Opel logo is not on the radiator grille, but on the bonnet. The grille swings up with the bonnet.

The Senator B was initially offered in two trim levels: Senator and Senator CD .

The basic equipment of the Senator B includes an anti-lock braking system and a Servotronic , which regulates the power of the power steering as a function of the driving speed. While the steering is smooth at low speed, it becomes firmer with increasing speed. Shortly before the Servotronic already was introduced on the BMW 7 Series (E32) . The car Bild criticized that the Servotronic "at high speed seems a bit spongy". According to an ZF technician, the Servotronic in the Senator was "more comfortable than in the BMW". 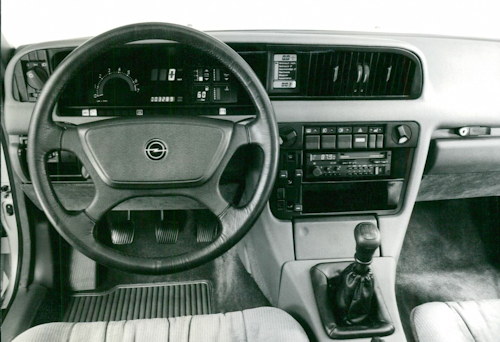 As standard, the Senator B was delivered with a 5-speed manual transmission. On request was an electronically controlled 4-speed automatic transmission with three programs: Power , Economy and Winter . The CD equipment comes standard with the automatic transmission.  In addition, the CD-radio equipment a digital tachometer, power windows and an electronic suspension control. With a wheel on the dashboard, three settings can be selected: normal, sporty and comfortable. Depending on the setting, the shock absorbers are harder or softer.

The instruments and the steering wheel come from the Omega A, the center console is redesigned. In the interior sitting front outer air vents in the doors. They swing with them outward. The seats, steering wheel and front and rear seat belts can be adjusted in height. The seats are covered with velor , the interior is covered with velor. The rear seat can be folded in three parts. The boot holds 530 liters and 10 liters more than in the Omega A. The chassis of the Senator B comes from the Omega A. In Senator B, it is softer, more comfortable . 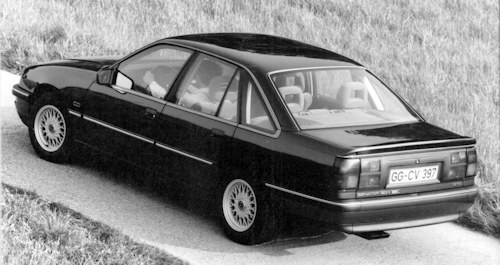