The Opel Calibra V6 4 × 4 was a prototype of Adam Opel AG , based on the road-legal Opel Calibra , which was developed for the DTM / ITC and used in these racing series. In 1996 Manuel Reuter won the ITC with this car. In 1999, Volker Strycek entered a DTM Calibra to mark the 100th anniversary of Opel's 24-hour race at the Nürburgring .

In 1992, the new Opel sports chief Walter Treser withdrew the Opel Omega from the DTM to build a new car for 1993 in the course of the 1991 adopted by the ITR regulations.

The new regulations no longer saw a racing series with several classes, but a single displacement of 2.5 liters and a maximum of 6 cylinders. Four-wheel drive was allowed. The old "law" of homologation number of 500 copies sold in twelve months was given up. It was permissible to pick up a model from the mass production with a suitable engine from the own house (also from other model series).

These changes should come into force with the 1993 season. The Calibra with four-wheel drive and a V6 naturally aspirated engine was not completed in 1993. Opel put him on a trial basis at the last race of the 1993 season at Hockenheim with the renowned Joest team , which was successful in the Group C sports cars in Le Mans and Daytona . The drivers were first the Le Mans winner Manuel Reuter and the Formula 1 World Champion Keke Rosberg .

Test at the race in Hockenheim

The performance of the new Calibra proved Manuel Reuter with the fifth starting position in qualifying, Rosberg was seventh in the first race. In the second race, however, both cars failed due to electronics problems, so that for the 1994 season was still much to improve.

The most important innovation on the car was the engine built at Cosworth , which proved to be very reliable; because until the middle of the season, there was no engine damage at Opel. Officially, this unit was not referred to as "Cosworth", but as "Phase 3".

Team Joest put in three vehicles this season, the drivers were first Manuel Reuter and Keke Rosberg; new came the Bremen businessman Louis Krages with the pseudonym "John Winter". However, the car failed again and again on technical trifles. In the race at the Berlin Avus John Winters Calibra went up in flames after a heavy impact in the guardrail, winter was uninjured.The first Calibra victory came under strange circumstances. In British Donington Park an invitation race took place, which did not count for sport-political reasons to the DTM valuation. In the first of two races, Manuel Reuter rammed his manager and team-mate Rosberg off the track.

As a fancier in the first race, Reuter had to start in the second race at the end of the starting grid, but nevertheless finished second. After the race, the winner Alfa- pilot Alessandro Nannini was disqualified due to the mandatory gasoline test and Reuter was first.

Opel had fallen far short of expectations, due to recurring brake problems and other technical difficulties. It remained with some "attention successes".

Manuel Reuter as the best Opel driver with a win (unrated in the championship) and with eighth place and 89 points could despite the not yet mature Calibra respect in the new DTM create. Keke Rosberg offered an average performance in the season, but still proved in training with good times and a third place in Hockenheim, what the Calibra was capable of, and came with 14 points at the end of the season in 14th place. Louis Krages alias "John Winter" took eleven points and came in 16th place.

For the new season, Walter Treser reformed his "force" and distributed the cars to two teams, the team of Joest and the newly formed team Rosberg from Neustadt an der Weinstraße . Rosberg acted as driver and team owner. Klaus Ludwig drove the second Rosberg-Calibra after a spectacular change from Mercedes-Benz to Opel . The Joest team put in four cars with the drivers Manuel Reuter, the Finn JJ Lehto , the Frenchman Yannick Dalmas and the Portuguese Ni Amorim .

The training times of the drivers were promising, but usually followed failures in the race due to technical problems. Only towards the end of the season came the long-awaited breakthrough. Klaus Ludwig won both races in Hockenheim and Manuel Reuter contributed with his second place to the first Opel double victory.

New in the season was that also races abroad counted. Therefore, there was the new name DTM / ITC and two ratings. The "Phase4" Calibra - so the official name - was completely redesigned with technical and electronic parts from various suppliers, including a built by the Formula 1 racing team Williams hydraulic system. But again and again it came in particular to this system to disturbances, since the technicians and mechanics were not yet familiar with the complicated technology. It was striking that Manuel Reuter broke almost all existing records at the beginning of the season with the old Phase 3 Calibra, although the Phase 4 Calibra should have been a winning car.

At Opel, Walter Treser was replaced by Wolfgang-Peter Flohr as sports director, he reinforced the troop again to get the title. The team Zakspeed came to new and sat next to Klaus Ludwig the newcomer Uwe Alzen . The team Rosberg drove now Hans-Joachim Stuck and JJ Lehto . Joest continued to drive Manuel Reuter, next to him Yannick Dalmas, junior driver Alexander Wurz and Oliver Gavin . In addition, Gianni Giudici continuedenter a '95 Calibra privately. However, as the cost of attending the DTM increased, Alfa Romeo and Opel announced that they were leaving the DTM / ITC and did not make a comeback until 2000, when Opel was heavily involved.

During the winter break, Opel had improved its vehicles and set in the run yardstick for the 1996 season. From the beginning, Manuel Reuter proved as Opel driver number one.

But the other Opel pilots convinced by good performances. In Helsinki Opel drove a dominant race. In both races Opel pilots occupied place one to three. The same thing happened at the Norisring. Ludwig won both races ahead of Alzen and Lehto. After Reuter was able to record a victory in Hockenheim and the Eifel race , he was early on tactical driving and point collecting set. At the last race in Germany, he won again, before he could secure the championship title in São Paulo .

After a strong season Opel won the championship title and the brand rating.

Manuel Reuter won the title with three victories and a total of 218 points ahead of Mercedes driver Bernd Schneider with 205 points. After the win at Hockenheim, Reuter stopped with his Calibra on the start-finish line, got out to celebrate the victory, and had to pay a fine for it.

JJ Lehto finished fifth in the championship with 148 points. At the Nürburgring , in Helsinki, at the Norisring , in Silverstone and in Magny-Cours he was among the top three.

For the 100th anniversary of Opel Motorsport Director Volker Strycek brought a former Phase 3 DTM Calibra to the Nordschleife , but from the outset should not be used fully in the race. Exactly at zero o'clock, Strycek drove the Calibra off the track to the marquee where the jubilee celebration began. In the 40 laps, however, the Calibra had once again proven its class and lost five seconds per lap to the favored car, the Zakspeed Viper . 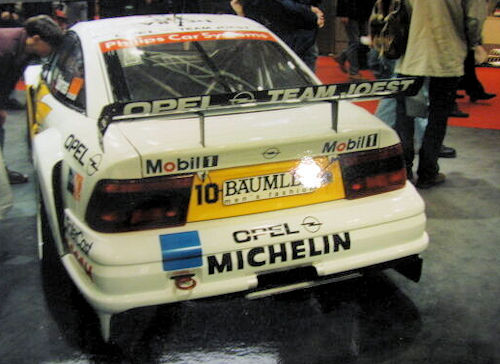