The Opel Ampera was a four-seat plug-in hybrid - car model from General Motors based on the first generation of the Chevrolet Volt with GM Voltec powertrain . The sister models, which included the right-hand drive Holden Volt in Australia and Vauxhall Ampera in the British Isles, were manufactured from July 2011 to 2014 at the Hamtramck plant of Chevrolet in Detroit. The purely battery-powered electric successor is in Europe from 2016, the Opel Ampera-e based on the Chevrolet Bolt .

As "Opel Ampera" the car was introduced in March 2009 at the Geneva Motor Show . Opel calls it an "electric vehicle with range extender", engl. abbreviated "EREV", but also advertises: "Drive our electric vehicle into the future".

With full battery (16 kWh) the Ampera drives 40 km to 80 km exclusively electrically. The built-in internal combustion engine with the 54 kW-generator unit starts automatically as soon as the state of charge of the battery (3.2 kWh) has fallen below about 20%, and then supplies the electrical drive current; This type of vehicle is therefore also called the Extended Range Electric Vehicle (EREV, extended-range electric vehicle).

The internal combustion engine is a "family 0" engine of the Opel Ecotec series with 1.4 l displacement and 63 kW.

The vehicle is powered by its Voltec drive  via a planetary gear continuously in several operating modes, especially by electric motors. When the battery is low, the internal combustion engine drives a generator, which then supplies the further traction current (serial mode).

When requesting high drive power with low charge state of the traction battery , the internal combustion engine can be coupled directly into the drive train in a special operating mode . This "parallel mode" increases the efficiency of the entire system because multiple energy conversions (internal combustion engine-generator-electric motor) are eliminated.

The traction battery is a 288 cells (3 parallel, 96 in series) constructed lithium-ion accumulator with 16  kWh nominal capacity is used, which is operated for durability reasons only in a limited operating window (useful capacity). Contrary to publications of a capacity utilization of the traction battery between 30 and 80 per cent of the nominal capacity (thus only about 8 kWh useful capacity) , there are messages in Internet forums, which indicate up to 10.5 kWh effective utilization energy according to the on-board computer of production vehicles to report. 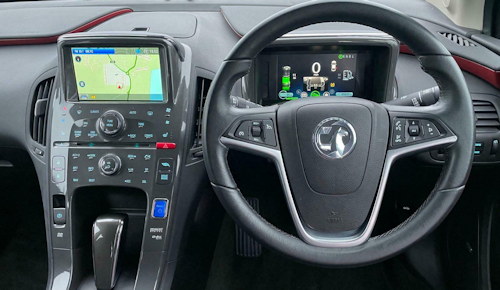 A full charge by plug to 100% does not take place in order to accommodate further charge by recovering braking energy and to save the battery. On longer journeys, the internal combustion engine is automatically switched on as a generator drive to generate the traction current and maintain the minimum charge level, thus increasing the range without stopping - with a tank volume of 35 liters - to over 500 kilometers.

Consumption is the manufacturer according to ECE R101 with 1.2 l / 100 km (only gasoline consumption) for the first 100 km, for all other 100 km without intermediate battery charge 4.8 l / 100 km or 5 , 0 l / 100 km indicated. In practice, the Ampera in pure electric mode was 40 to 80 km. Several Ampera drivers report from their everyday lives that ranges of just over 80 km are also possible on a purely electric basis.

Due to a vehicle fire an identical Chevrolet Volt three weeks after a successful crash test  in the United States the security concept was traction battery revised by the end of the 2011th The battery of the Chevrolet Volt was not fully discharged after the crash test, contrary to the recommendations of Chevrolet. For vehicles with liquid fuels, it is mandatory to empty the tank after the crash attempt if it was not done with the fuel tank empty. This also delayed the start of production of the identical Opel Ampera, whose sale began on January 14, 2012.

Due to initially low demand, General Motors interrupted the production of the Opel Ampera and the Chevrolet Volt in March 2012 for five weeks.  Since September 9, 2013, the Ampera was offered significantly reduced, so that the model from 38,300 euros was available.

Production was halted in 2016 due to poor sales figures (Europe-wide 332 vehicles in the first five months of 2014) with the release of the revised Chevrolet Volt in 2016. Karl-Thomas Neumann , CEO of Opel AG, announced a smaller model as successor.