The Vauxhall Opel Insignia A is a car model of the manufacturer Opel. And has been sold since autumn 2008.This replaced the Vectra made until summer 2008.

For the first time, the Insignia was presented in July 2008 at the British International Motor Show. For sale in November 2008, this came as a four-door notchback and five-door hatchback with full 5 Stars in the Euro-NCAP  crash test .

In March 2009, followed by the estate wagon version,as the Sports Tourer is. It was presented in October 2008 at the Paris Motor Show.

The Buick Regal , which was released in autumn 2009, is identical to the Insignia. On the same platform GM Epsilon 2 are also based the Chevrolet Malibu and the Saab 9-5 II.

Until January 18, 2017, the model was ordered, the last vehicle rolled off the line in April. In total, Opel produced 944,670 Insignia of the first generation. The successor model Insignia B was launched on June 26, 2017.

The Insignia is slightly larger than the last Vectra, the price was slightly increased. Visually, the sedans are almost identical. The difference lies in the attack of the tailgate : The five-door hatchback this is struck on the roof, the four-door notchback below the rear window. In addition, the hatchback has a rear window wiper, which is not standard.

In June 2013, the Insignia underwent a facelift.  The front lights were modified and provided with LED strips. In addition, the bumpers and the surround of the fog lights were changed. At the rear, similar to the Cascada cabriolet, a wide chrome clasp was integrated that extends right into the rear lights. The taillights received a standard LED brake light.

From a technical point of view, there were also changes: there were some new engines used, including two new turbocharged direct-injection gasoline engine, the 1.6-liter displacement 125 kW (170 hp) and 2.0 SIDI 184 kW (250 hp ) Afford. In the two smallest diesel engines, the power was increased by 10 hp (110 to 120 or 130 to 140 hp) and reduced consumption. The largest diesel engine was a new 2.0 CDTI with 143 kW (195 hp). In addition to the chassis, the interior has been thoroughly revised. The often criticized in the trade press operating system has been completely replaced, it was a larger and higher resolution display and the number of switches has been significantly reduced. In addition, there was a new control unit for the climate control, a new steering wheel and the optional semi-digital speedometer unit, where various information can be displayed on the central display as desired.

Towards the end of 2013, to complete the range of the station wagon also appeared a higher version, which was sold under the name Insignia Country Tourer . The vehicle offers increased ground clearance, off-road trim all around, underrun protection front and rear and widened fenders. The engine compartment was protected against damage from below with an underride protection made of aluminum plate.

Another novelty in this segment was the optionally available front camera. The so-called "Opel Eye" contains a lane departure warning system and traffic sign recognition, which recognizes certain traffic signs (speed restrictions, prohibition signs) and displays them on the display. The system was developed by Opel together with Hella . Lane Keeping Assist warns the unintended lane departure.

Haldex adaptive four-wheel drive is automatically active at vehicle startup to improve power transfer and, when traction is no longer needed on the rear axle, reduces fuel consumption by 90% of the torque to the front axle. Opel's Flex Ride Premium chassis can be adjusted in Normal , Tour and Sport modes . The instrument illumination is white, when activating the sport mode it changes to red. 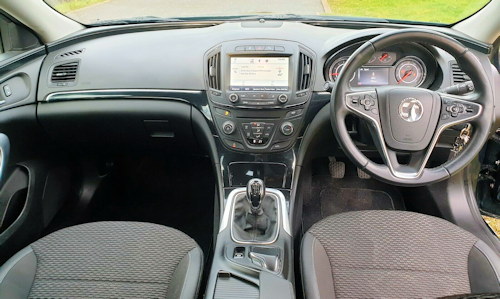 For the first time there was in a Opel also side airbags for the rear seats, for the front seats has ventilation available

For the launch of the Opel Insignia there were seven engines to choose from: four petrol and three diesel engines. All engines met the standard Euro 5 standard .

The drive on the Insignia takes place via the front wheels. The exceptions are the 2.8-liter turbocharged petrol engine with 191 kW (260 hp) and 239 kW (325 hp) and the since 2011 sold 2.0-liter turbo with 184 kW (250 hp), as standard have four-wheel drive. For the two most powerful diesels, both drive concepts were available. The six-speed automatic transmission was offered for all engines except for the 1.4, 1.6 and 1.8-liter gasoline engines and the weakest diesel engine.

An ecoFLEX version of the 2.0-liter diesel engine in 2009 extended the engine range of the Insignia. With modified aerodynamics and engine control, the 160-horsepower 2.0-liter CDTI achieves a CO 2 emissions of less than 140 g / km, equivalent to about 5.0 l of diesel per 100 km.

The OPC variant with a 2.8-liter V6 turbo engine offers a power of 239 kW (325 hp) and a maximum torque of 435 Nm and was available since summer 2009.In April 2011, offered Opel called the Unlimited version that dispenses with a limit on the maximum and achieved a notchback model with manual transmission up to 270 km / h.

In the spring of 2012 came a 2.0-liter twin-turbo diesel for the Insignia in the range, which makes 143 kW (195 hp) with a maximum torque of 400 Nm. This engine is an evolution of the 118 kW model. The consumption is given as 4.9 liters of diesel per 100 km. This engine was offered in all model variants and was also available in combination with all-wheel and automatic.

Introduced in October 2014 at the Paris Motor Show, the new "Whisper Diesel" with 2.0 l displacement, 125 kW (170 hp) and a torque of 400 Nm replaced since spring 2015, the 120 kW (163 hp) diesel. This Opel linked already to the new 1.6-liter diesel engines from the Astra J on. These are to have a drastically reduced noise and vibration level, more power and less consumption. Furthermore, this engine complies with the Euro 6 standard . 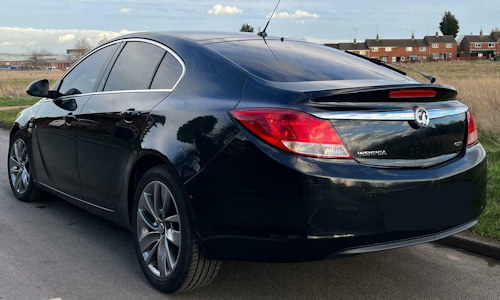