The Astra G was launched in Europe in 1998. It was available as a 3-door liftback and 5-door liftback, 4-door saloon, 5-door estate (in Opel tradition, known as a "Caravan") and two special versions from 2000: the Astra Coupé and the Astra Cabrio, both of them designed and built by Bertone. The Astra G saw the introduction of a natural gas-powered engine. Its chassis was tuned by Lotus and formed the base of a 7-seater compact MPV, the Opel Zafira. Approximately 90,000 coupés were produced, of which 7000 were cabriolets.

As standard there was power steering , four airbags (for export none or only two airbags), ABS (export partly without) and an immobilizer .

For an additional charge were various extras such as climate control , navigation system , traction control or xenon headlights available and an electronic 4-speed automatic transmission.

The Astra G was the first Opel to be offered with a fully galvanized body (until model year 2001, then partially galvanized), 12 years rust-through warranty and partial gold leaf trim.

The manufacturing of the Astra Saloon continued at Opel's Gliwice plant in Poland after the debut of the next-generation Astra H, with the older model being branded as Astra Classic in a similar fashion to its predecessor, catering to the lower end of the market. This car was offered in Central and Eastern Europe, as well as Turkey with the name Astra Classic II from 2004 to the end 2009. Apart from European markets, these models were sold in Australia and New Zealand as Holden Astra Classic, until they were replaced by the Holden Viva in 2006The Astra G was built as Chevrolet Astra in Brazil. It was facelifted in 2003, and was sold in Brazil, Argentina, Mexico, and other Latin American markets until 2011. The GM Brazilian 2.0 8V I4 engine which equips the Astra has the "flexpower" technology, that allows the car to run on both petrol/alcohol fuels, providing 128/140 hp (G/A) at 5200 rpm.

A taxi version of the Brazilian sourced model, powered with gasoline 2.0 engine was sold in Chile as the Chevy Urban.

In 2004, GM's Russian joint venture GM-AvtoVAZ launched the 4-door version of the Astra G as the Chevrolet Viva. It was sold through Chevrolet dealers in Russia, while Opel dealers were selling the newer Opel Astra H. Sales were poor from the start due to high pricing: the only version launched was equipped with a 1.8L engine with an above-average trim level, placing the Viva's price above the Toyota Corolla. A project costing $340 million was selling less than a thousand cars annually (801 cars in 2007); rumours of shutting down Chevy Viva production circulated as early as summer of 2005. GM-AvtoVAZ shut down small-scale production of the Viva in March 2008.

The convertible was designed as well as the coupe at Bertone in Italy (quote: "conceived by Opel, created by Bertone") and manufactured from March 2001.

It is a four-seater convertible with soft top , the space in the rear - as usual in such vehicles - does not consist of full seats. The roof is a solid trough and it claimed so regardless of whether it is open or closed, no additional space. Thus, the trunk is correspondingly smaller compared to the coupe. Furthermore, there can be stowed the wind deflector.

The convertible was offered exclusively with electric hood, as an option with remote control via the central locking by key. She was standard on the models 2.2 and 2.0 turbo. Opening or closing takes about 25 seconds and requires that the vehicle is stationary and the handbrake is applied. In addition, all four side windows can be opened and closed simultaneously via a central switch.

The special model Linea Rossa - by Opel with "Haute Couture for elegant drivers" advertised - was among other things with a red-black Nappa interior (seats, door panels), white underlay round instruments with red hands, leather steering wheel with remote control for the audio system, aluminum Gear knob and door sill trims equipped with Linea Rossa lettering and special wheels. The remote-controlled soft top was as standard as the wind deflector. Magmarot, carbon black, stars silver, chiantirot and light silver were available in the exterior colors; a red-colored top could be ordered for certain colors.

The 90-year Bertone edition was offered to the occasion in accordance with, among others, beige leather interior, black-colored center console, white-backed round instruments, various Bertone lettering and special wheels and paintwork.

The convertible Daytona was presented with the slogan "Open to new legends" : cashmere beige fabrics, white lined round instruments, leather steering wheel with remote control, and leather and aluminum applications dominate the interior.

With "homage to a myth", the convertible Silverstone was presented: Among other steel-gray fabric and leather applications and gray seat belts, aluminum gear knob, leather steering wheel and white-lined instrument panel were the features.

Technically, these special models did not differ from the standard models; however, the special features were only available in these versions.

The Astra Coupé was manufactured in March 2000 in Grugliasco Turin, Italy , by Bertone , which is highlighted by attached to the side panels Bertone logos and the company logo Bertone in the standard door sills.The vehicle was often seen as the unofficial successor of the Opel Calibra , but was, according to Opel, the successor of the Cadet C Coupe.

The model was initially referred to as the Astra Coupe . At the rear of the vehicle was from November 2000 no longer "Astra Coupe", but only to read "coupe".

The 2.0-liter turbo was delivered exclusively with 17-inch alloy wheels with five spokes and received a larger front brake system as standard.

The 2.2-liter gasoline engine introduced in the Astra Coupe had been newly developed by GM. The engine with the designation Z22SE / L61, which was likewise installed in the convertible and in the Opel Speedster , was the first engine of the successful L850 engine family.

Air conditioning was standard, but it could be deselected. From model year 2002, an automatic climate control was available (also standard, depending on the version). The standard equipment was very extensive compared to normal Astra-G models. So were electric windows, electric adjustable and heated mirrors and fog lights from the factory as standard. 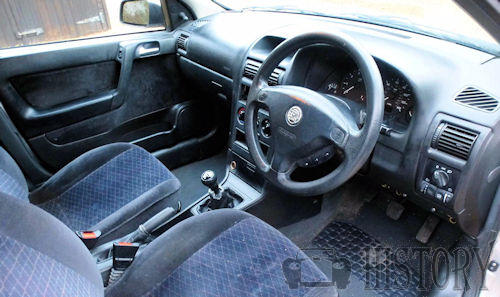 The Astra G series Coupé look was used for the V12 powered dedicated racing cars in the DTM series. These DTM racing cars are purpose built race cars with barely any parts taken from the road cars save for lights or door handles. The car's bodywork featured gull-wing doors that were each supported by two gas struts. The racing cars were powered by 4.0L V8 engines with nearly 500 hp (370 kW). Opel did poorly during several seasons of DTM as only Manuel Reuter placed significantly in the championship once, taking second in the inaugural season 2000. Opel won the 24h Nürburgring in 2003, though.

"OPC" (for Opel Performance Center ) replaced in 1999 the "GSi" code ( Grand Sport injection ) at Opel for the time being. The first Astra OPC was a 3000 copies limited sports homologation edition of the Astra G. It was delivered only in black, stars silver and arden blue.

He got various suspension and engine components from racing. Among other things, the OPC 1 received a 16-inch brake system with brake cooling as well as modified front wishbones and a more directly tuned power steering. Compared to the standard model, another rear axle was installed, whose lane values, together with the front axle, were matched to only one driver (left front seat). The rear of the OPC 1 is steel-reinforced for greater torsional rigidity.

The 2.0-16V engine was redesigned by the motorsport department to 18 kW more power than the normal version (100 kW to 118 kW). Manifolds , forged pistons, "sharper" camshafts , larger channels and modified software increased performance and should also deepen the overall sporty impression. An oil cooler should keep the oil temperature lower to maintain the important lubricating properties of the oil under high engine loads. A coolant thermostat with 82 ° C opening temperature was also used to lower the coolant temperature compared to the standard engine.

The outer appearance was not changed too much in the first OPC version. In addition to a large tail, which provides zero lift on the rear axle with a drag coefficient (c w ) of 0.30 (like the Porsche 911 GT3 ), a modified front lip, rear muffler, 17-inch BBS alloy wheels and OPC Sports mirror (hagus) installed. The body was also lowered by 20 mm.

Inside there were Recaro sports seats without side airbags or height-adjustable Opel sports seats with side airbag and lumbar support. The most important feature of the interior are the blue seat belts, the skyline blue seat covers and the consecutive numbering of the OPC-1 models in the center console. The instruments in the cockpit were deposited in white as in the variants of the Astra "Sport".

There were two variants for Germany, on the one hand the "Touring" version with anti-theft alarm , power windows, air conditioning, adjustable steering column, central locking (radio) and radio (base price 46,450 DM / 23,749.51 €), and a "Sport" version without the additional equipment of the Touring version, which weighed 50 kg less (base price 42,900 DM / 21,934.42 €). Both versions had the short-stepped F23 sports transmission, which was also in the Opel Speedster, as well as a traction control with intervention on engine and brakes and an on-board computer with integrated check-control system.

The Astra Xtreme, a concept car presented at the 2001 Geneva motor show, was a single-production V8-powered Astra based on the G-series Astra DTM. Like the DTM racing car, it featured a 4.0 litres (240 cu in) V8 engine, producing 444 hp (331 kW), gull-wing doors supported by gas struts, carbon fiber panels, and race-specification interior with five-point seatbelts.

The season of 2005 also joined the history of Stock Car. In addition to the category have become multi - the first time the Mitsubishi Lancer ran alongside the Chevrolet Astra, on 30 October 40 cars Stock Car V8 engine performed an unprecedented race outside of Brazil worth points for the championship. It was a round to the side of TC 2000, the main category of Argentina and in July had run in Curitiba (Autodromo Internacional de Curitiba). The Autódromo Juan y Oscar Gálvez received an audience of 70,000 people. Giuliano Losacco was the winner with Mateus Greipel second and Luciano Burti third.

The engine was a V8 Chevrolet 350 imported from the United States by JL, similar to that used in Busch Series, the second category of NASCAR, equal and limited to 450 hp (336 kW). Thus, the automaker GM is now sponsoring the category, providing the fairing of the Astra, making room for other manufacturers could enter the category with low investment.

An Astra won the Andros Trophy for three consecutive years starting in 2000.

The Astra has been used in the shape of silhouette racing cars as well. It was featured in the Deutsche Tourenwagen Masters from 2000 to 2003 (Manuel Reuter was runner-up in 2000) and overall winner of the 2003 Nürburgring 24h race and the Stock Car Brasil from 2004 to 2008 (Giuliano Losacco won the tournament in 2004 and 2005). In 2009, the Astra G body was replaced Stock Car Brasil by a Vectra, which is in fact the same as the Astra H. 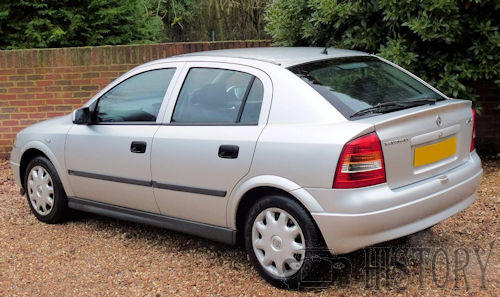