The first Opel car to carry the Kadett name was presented to the public in December 1936 by Opel's Commercial-Technical director, Heinrich Nordhoff, who would in later decades become known for his leadership role in building up the Volkswagen company.

The new Kadett followed the innovative Opel Olympia in adopting a chassis-less monocoque construction, suggesting that like the Vauxhall 10 introduced in 1937 by Opel's English sister-company, the Opel Kadett was designed for high volume low cost production.

or, at the same list price of 2,100 Marks, as a soft top "Cabrio-Limousine". The body resembled that of the existing larger Opel Olympia and its silhouette reflected the "streamlining" tendencies of the time. The 1,074cc side-valve engine came from the 1935 Opel P4 and came with the same listed maximum power output of 23 PS (17 kW; 23 hp) at 3,400 rpm. 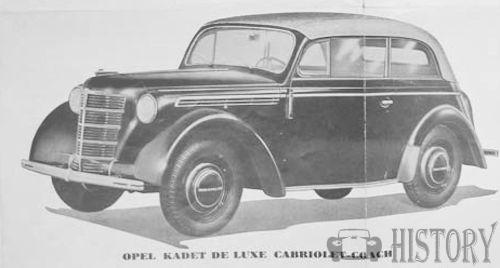 The brakes were now controlled using a hydraulic mechanism. The suspension featured synchromous springing, a suspension configuration already seen on the manufacturer's larger models and based on the Dubonnet system for which General Motors in France had purchased the license. The General Motors version, which had been further developed by Opel’s North American parent, was intended to provide a soft ride, but there was some criticism that handling and road-holding were compromised, especially when the system was applied to small light-weight cars such as the Kadett. By the end of 1937 33,402 of these first generation Kadetts had been produced.

The manufacturer now offered two versions of the Kadett, designated the "Kadett KJ38 and the "Kadett K38" the latter also being sold as the "Kadett Spezial". Mechanically and in terms of published performance there was little to differentiate the two, but the "Spezial" had a chrome stripe below the window line, and extra external body trim in other areas such as on the front grill. The interior of the "Spezial" was also better equipped. To the extent that the 300 Mark saving for buyers of the car reflected reduced production costs, the major difference was that the more basic "KJ38" lost the synchromous springing with which the car had been launched, and which continued to be fitted on the "Spezial". The base car instead reverted to traditional rigid axle based suspension similar to that fitted on the old Opel P4.

The base car was available only as a two-door "Limousine" (sedan/saloon). Customers looking for a soft-top "Cabrio-limousine" would need to specify a "Kadett Spezial". For the first time Kadett buyers, provided they were prepared to choose a "Kadett Spezial" could also specify a four-door "Limousine" (sedan/saloon) bodied car, priced at 2,350 Marks as against 2,150 Marks for a "Spezial Cabrio-Limousine" and 2,100 Marks for a two-door "Spezial Limousine". 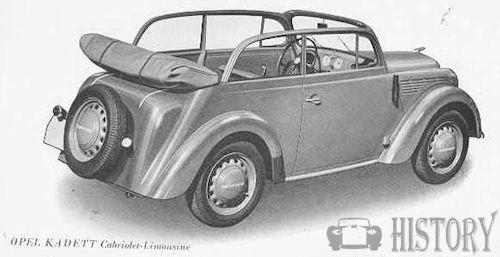 In marketing terms the "Kadett KJ38" was intended to fill the niche that Opel had recently vacated with the departure of the Opel P4, but the KJ38, priced at 1,800 Marks, was more expensive than the P4 and its reduced specification left it with the image of a car for poor people (..Image des Arme-Leute-Autos..) at a time when economic growth in Germany was finally fostering a less minimalist approach to car buying. The "Kadett K38 Spezial" fared better in the market place: in 1938 and again in 1939 it was Germany's top selling small car. By May 1941 the company had produced 17,871 "Kadett KJ38"s and 56,335 "Kadett K38 Spezial"s.

Competitive pricing led to commercial success, and Kadetts continued to be produced during the early months of the war: by the time production ended in May 1940, following intensification of World War II, 106,608 of these Opel Kadetts had come off the assembly line at Opel's Rüsselsheim plant, which had been the first major car plant in Germany to apply the assembly-line production techniques pioneered by Henry Ford.

After the Second World War, the tooling from the Opel Rüsselsheim car plant (located in the American occupation zone) was requested by the Soviet Union in the war reparations package, agreed upon by the victorious powers, to compensate for the loss of the production lines for the domestic KIM-10-52 during the siege of Moscow. Being faced with a wide range of German "small litrage" models to choose from, the Soviet planners wanted a car which closely followed the general type of the KIM - a 4-door sedan with an all-metal body and a 4-stroke engine, and therefore rejected both the rear-engined, two-door KdF-Wagen (future VW Beetle) and the two-stroke powered, front-wheel-drive, wooden-bodied DKW F8, produced by the Auto Union Chemnitz plant in the Soviet occupation zone. Ultimately, the closest analog of the KIM to be found was the 4-door Kadett K38.

On August 26, 1945 the State Defense Committee published Order № 9905, which prescribed to start the production of the 4-door Kadett on the Moscow small car plant "without any changes to the design".

However, the implementation of these plans was by far not smooth. The Rüsselsheim plant had been deeply involved in the Nazi war effort, producing aircraft engines for the Luftwaffe, and consequently has been heavily damaged by the Allied air raids. Very little was left to be salvaged - mostly incoherent drawings and plans, with several stamping dies for the 2-door version of the Kadett to add.

Still, a large number of Kadetts has been captured as trophies by the Red Army and available for study and reverse-engineering. This project was conducted by design bureaus formed as Soviet-German joint ventures under the Soviet Military Administration in Germany. There were totally 11 of them, one in Berlin (it reverse-engineered the engine and transmission), the other in Schwarzenberg (steel body) and Chemnitz (wooden bodied station wagon). The vast majority of the personnel of these design bureaus consisted of German specialists and craftsmen hired by the Military Administration. These design bureaus not only prepared the necessary blueprints and documentation, but also provided the wooden master model for the body. They even developed the new trim pieces which distinguished the Moskvitch from its Opel prototype, including hood emblems and hubcaps with a large "M" (for "Moskvitch"). However, the stamping dies and most of the tooling had to be produced in the USSR.

Production started on December 4, 1946. The Moskvitch 400/420 continued to be produced in Moscow with some minor changes until 1956, when it was replaced by the all-new Moskvitch 402, which continued to use the Kadett side-valve engine for some time (replaced by a domestically designed OHV engine during 1958). 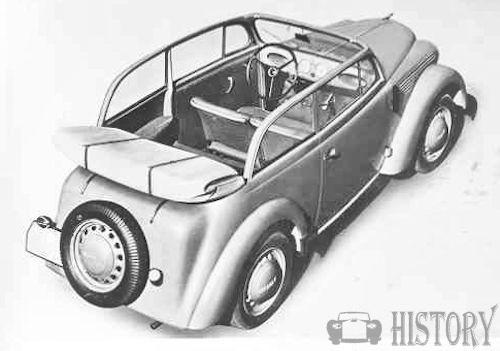