The second generation of Nissan Qashqai was unveiled in November 2013 in London. It is built in the British plant of Nissan Motor Manufacturing (UK) Ltd.

At the Geneva Motor Show in March 2017, Nissan presented a facelift of the Qashqai. At the North American International Auto Show in January 2017 in Detroit was presented with the Nissan Rogue Sport a similar to the Qashqai variant of the vehicle. It is sold in the United States since spring 2017. The Rogue Sport is built in Japan, powered by a 104 kW (141 hp) two-litre gasoline engine.

Nissan gave the Qashqai a major redesign in 2017, giving it a crisper appearance and a somewhat higher-quality interior. Any trim level comes well-equipped, but the higher-spec N-Connecta, Tekna, and Tekna+ versions have a more upscale feel to the capacious inside. All versions contain plenty of sound deadening material, making it a peaceful environment to be in while on the road. Despite the fact that this second-generation model is towards the end of its production run, the Qashqai continues to appeal to family car customers by being economical to run, well-equipped, reliable, and still looking great.

When the back seats are folded down, the boot floor has a cunning trick up its sleeve: it's made up of two panels that can be moved to produce either a deeper boot or a completely flat cargo area. When not in use, the parcel shelf may be stowed under the boot floor, which is very convenient. A huge central storage box between the front seats provides ample interior storage, and there are several cubbies and compartments for keys, wallets, and cell phones. The Qashqai utilises an electronic parking brake switch instead of a traditional handbrake lever to make place for this. 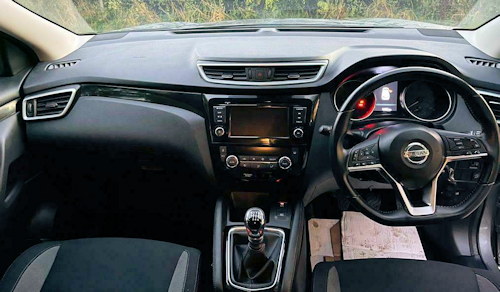 Helpfully, the parcel shelf can be stored under the boot floor when required. A tyre repair kit in lieu of a spare wheel is standard – a proper spare wheel is available at extra cost. It’s worth noting that this option is not available if you spec the rich-sounding Bose stereo, as the woofer speakers are positioned in the spare wheel well. Plastic hooks to hang shopping bags on are moulded into the boot sides, while inside the cabin there is more interior storage space than before, with a large central storage box between the front seats. This features an aux-in socket, USB port and 12v socket for charging electrics, with a space under the lid to run a cable through so devices can be still be plugged in when not stowed in the box itself.

When not in use, the parcel shelf may be conveniently stored beneath the boot floor. A tyre repair kit is included instead of a spare wheel; a true spare wheel is available for an additional fee. The woofer speakers are located in the spare tyre well, thus this option is not available if you specify the rich-sounding Bose stereo. Inside the cabin, there is more interior storage space than before, with a huge central storage box between the front seats, and plastic hooks for hanging grocery bags are moulded into the boot sides. There's an aux-in jack, a USB port, and a 12v charging connector on this.

The second generation of Nissan Qashqai was built until 2021. 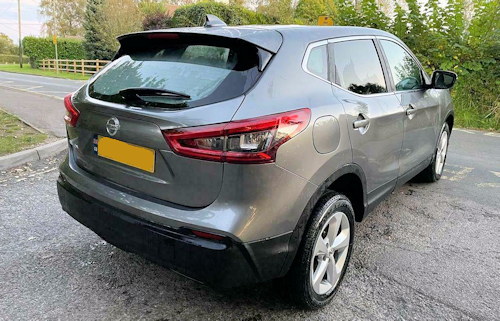