The Nissan Sunny GTI-R (also called Nissan Pulsar GTI-R depending on the market ) is a sporty compact class modelwith four-wheel drive of the Japanese car manufacturer Nissan . It is based on the three-door version of the Nissan Sunny / Pulsar N14 series.

The 1980s Sunny was a typical small hatchback, so when Nissan decided they wanted to go rallying with it later that decade, it had to go through severe changes. The monocoque was strengthened to cope and Nissan gave the car a sophisticated 4WD system with a central viscous coupling and limited-slip differentials for remarkable grip. Independent MacPherson strut suspension was fitted all around with a slightly lowered ride height but only understated 14-inch (335mm) alloys. With the body also restrained Gust a rear spoiler and hood vent. The all-aluminium engine had twin cams, 16 valves, Bosch electronic multi-point fuel injection and an air-to-air intercooled turbo which was free of lag and gave tremendous torque. The car lasted from 1990 to 1994 and was more a spectacular road car than successful rally car. 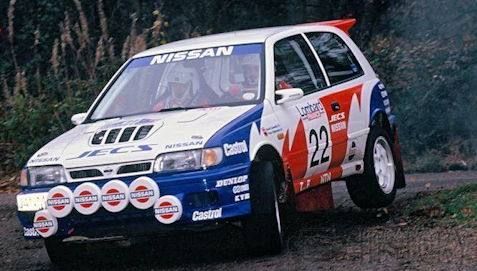 The GTI-R was to homologation for the former World Rally Championship Group A built. Prominent representatives of this era included the Lancia Delta Integrale and the Toyota Celica Turbo 4WD .GTI-R constructed according to Group A regulations.The success in the World Rally Championship 1991 & 1992 was low. The best result was third place by Stig Blomqvist at the 41st Rally Sweden . That's why Nissan Motorsports Europe (NME) also stepped out as a factory team. The reasons for the poor performance were called the unfavorable place of the intercooler on the engine and the allegedly worse Dunlop tires.The team starting in this group was able to win first and second place despite concerns in 1992.

Differences to the "normal" Sunny (GTI) are a larger rear spoiler, an engine hood provided with several air intakes (for cooling and for the intercooler), front bumper with larger cooling holes and 3 additional instruments (oil temperature / oil pressure / boost pressure) in the center console , 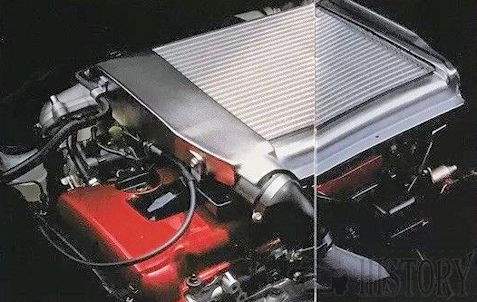 The Nissan Sunny GTI-R is powered by the Nissan SR20DET, this engine is also used in a similar form in the Nissan 200SX . A Garrett GT28 turbocharger charges the 2.0-liter engine at 0.73 bar. In addition, a single throttle valve system is installed, and a motor mounted above the charge air cooler (so-called TMIC = Top Mounted intercooler). The cylinder head of the 16-valve is made of aluminum and has sodium filled exhaust valves for better heat dissipation.

The aluminum engine block is a so-called 54C block, a reinforced version of the SR20DET, with u. a. larger oil and cooling water channels. This was also used in the British Touring Car Championship in Nissan Primera .

The Japanese version of the right-hand drive Pulsar GTI-R (RNN14) makes 230 hp and 280 Nm in Japan because of higher octane number.

Power is transmitted via a five-speed manual transmission and permanent four-wheel drive. The core of the system is the central differential gear and a separate rear axle differential , each of which is equipped with a viscous lock. The all-wheel drive is based on the developed by Nissan ATTESA system. Due to the four-wheel drive necessary for the cardan tunnel, the bottom group of the GTI-R differs from that of the front-wheel drive Sunny.