The second-generation K11 was built in the UK and launched in Japan in early 1992, and released in Europe in the fourth quarter of the year. It was powered by brand new all-aluminium 1.0 L (CG10DE) and 1.3 L (CG13DE) DOHC 16-valve engines, with 55 PS DIN (40 kW/54 hp) and 75 PS (55 kW/75 bhp) respectively (higher outputs were claimed in Japan, according to the JIS rather than DIN/ECE rating), both with ECCS (Electronic Concentrated Control System) fuel injection. It was the second Nissan model line to be produced in the UK at the Nissan Motor Manufacturing UK (NMUK) plant, Washington Tyne and Wear.A diesel version was offered with the 1.5 L PSA TUD market in Europe as Micra 1.5 D. CVT automatic transmission and Power steering was an option on some models, and the equipment list included safety features not usually available in this market segment: a toughened safety-cage and side-impact door beams were standard and pre-tensioning seat-belts and a driver's air-bag were optional. However, the Mk2 Micra scored only a modest two stars in Euro NCAP testing in 1997. Airbags, antilock brakes, electric windows, central locking and air conditioning were as either standard equipment or options on some models in the Micra range. 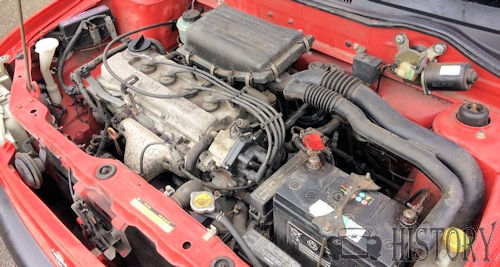 After minor changes in 1996, in 1998, six years after its launch, the Micra received a facelift which saw the whole range get power steering as standard.

There was a Cabriolet (FHK11) unveiled at the Tokyo Motor Show in 1995, but it was not sold until August 1997, with an electric top. These were produced in limited numbers for the Japanese Domestic Market (JDM) only. However, much like the Nissan Figaro, some have been imported into the UK unofficially. There was also an estate version called the March Box (WK11), which was unveiled on November 1999, with a double folding rear seat, along with an automatic transmission four-wheel drive model. 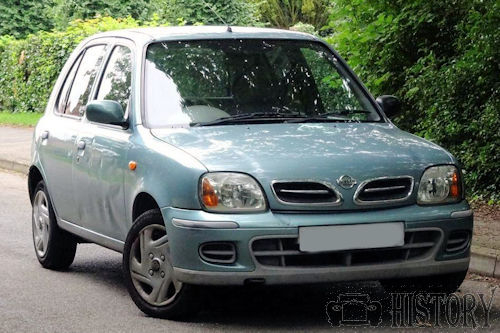 The cumulative visual changes from the first models included a revised front grille and headlights, redesigned front and rear bumpers, oval instead of round side repeater indicators, major changes to the interior and dashboard, redesigned rear light lenses, and a radio aerial repositioned from the top of the right-hand A-pillar to the middle of the roof, towards the rear. 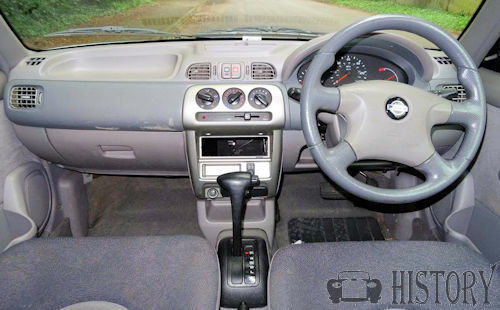 In late 2000, the original facelift was replaced by a second version, technically being quite similar. Changes included new lights on the bumper, an altered lower body, orange turn signals and minor changes to the interior. Further changes included a redesigned rear wiper which rested horizontally instead of vertically, and the centre high level brake lamp being reduced in size and mounted at the top of the rear window, instead of on the parcel shelf.

In 2001 Muji, the well-known Japanese "non-brand" issued a limited release of 1,000 badgeless and decontented Nissan Marches, only available online. It was intended as an exercise to test their online marketing systems and was sold as the "Muji Car 1000" (ムジ・カー 1000). The rear seat is upholstered in vinyl, the hubcaps are minimal, and the car was only offered in "marble white". The Muji Car 1000 has a four-speed automatic transmission and the 1 litre CG10DE engine.

The Bolero (also known as the Verita) was a luxury model available in certain markets from 1999 to 2003. It featured a redesigned exterior and an interior, which had leather seats.

The second incarnation of the Micra, the K11, was launched in the UK at the end of 1992, with production taking place in Britain at the Sunderland plant rather than in Japan. It was available with a limited range of engines: 1.0 and 1.3 petrol units. A facelift over the summer of 2000 saw the 1.3 shelved and replaced with a 1.4 unit. This upgrade, after a previous makeover in 1998, enhanced the Micra's appeal and it was still fairly popular on the launch of its successor in December 2002.

The Micra K11 (as it is known in Europe), was the third model after the Nissan Bluebird and Primera built in Nissan's NMUK plant in Sunderland, Tyne and Wear.

In 1998, the Sunderland, plant produced its millionth Micra, becoming the first Japanese manufacturer in Europe to achieve the milestone.

On January 16, 2013, popular YouTube stars Vsauce and FastFuriousAndFunny held up a Nissan Micra K11 with 180 rubber bands. They later smashed the car.

In August 2006, the K10 was still receiving credit for its impressive durability. An Auto Express survey revealed that of the 340,000 K10 Micras registered in the UK between 1983 and 1992, 96,000 were still on the road – nearly 30%, an impressive figure for a car which had been out of production for 14 years. This gave it a far higher rating than the Fiat Uno and the Austin Metro, both of which had dwindled away to less than 3%.

In 2007, with the Micra K12C, the model grades were brought into line with the rest of the Nissan UK range, namely Visia, Acenta, Tekna, 160 SR and Active Luxury.

The Micra C+C convertible was available in Visia, Acenta, Tekna and Active Luxury grades. However, the 1.6-litre engine is available for all models, save the Visia. 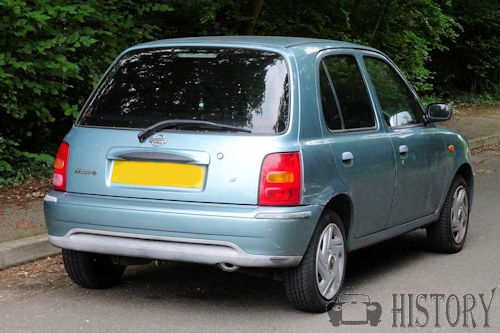