The first example, a Morris Mini-Minor with the registration 621 AOK, is on display at the Heritage Motor Centre in Warwickshire. Another early example from 1959 is now on display at the National Motor Museum in Hampshire.

The luxury models had decorative, non-structural wood inserts in the rear body which gave the car a similar appearance to the larger Morris Minor Traveller which had some of the look of an American-style 1950s Woodie. Approximately 108,000 Austin Mini Countrymen and 99,000 Morris Mini Travellers were built. 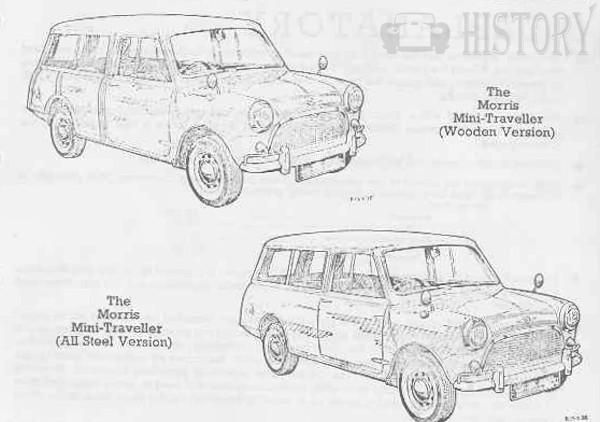 The Mini was marketed under BMC's two main brand names, Austin and Morris until 1969, when it became a marque in its own right. The Morris version was known to all as "the Mini" or Mini-Minor. The word minor is Latin for "lesser"; so an abbreviation of the Latin word for "least" – minimus – was used for the new even smaller car. One name proposed for the Austin version was Austin Newmarket. Austin dealers sold their almost identical car as an Austin Seven (sometimes written as SE7EN in early publicity material – the '7' the letter V rotated left so it approximated the number 7), which recalled the popular small Austin 7 of the 1920s and 1930s. "Morris Mini-Minor" seems to have been a play on words; the Morris Minor was a larger, well known and successful car that continued in production.

Until 1962, the cars appeared as the Austin 850 and Morris 850 in North America and France, and in Denmark as the Austin Partner (until 1964) and Morris Mascot (until 1981). The Morris name Mini (Mini-Minor) was first used for Austin's version by BMC in 1961 when the Austin Seven was rebranded as the Austin Mini, somewhat to the surprise of the Sharp's Commercials car company (later known as Bond Cars), who had been using the name Minicar for their three-wheeled vehicles since 1949. However, legal action was somehow averted, and BMC used the name "Mini" thereafter

In 1964, the suspension of the cars was replaced by another Moulton design, the hydrolastic system. The new suspension gave a softer ride, but it also increased weight and production cost. In 1971, the original rubber suspension reappeared and was retained for the remaining life of the Mini.