The car was powered by a Morris UB series 918 cc four-cylinder side-valve engine with three bearing crankshaft and single SU carburettor with maximum power of 23.5 bhp (17.5 kW). The gearbox was a three-speed unit with synchromesh on the top two speeds and Lockheed hydraulic brakes were fitted. Coil ignition was used in a Lucas electrical system powered by a 6 volt battery and third brush dynamo.

The body which was either a saloon or open tourer was mounted on a separate channel section chassis with a 7 feet 6 inches (2.29 m) wheelbase. The tourer could reach 58 mph (93 km/h) and return 45 miles per imperial gallon (6.3 L/100 km; 37 mpg-US); the saloons were a little slower. The chrome-plated radiator shell and honeycomb grille were dummies disguising the real one hidden behind. In September 1934 the bare chassis was offered for £95. For buyers of complete cars prices ranged from £118 for the basic two-seat tourer to £142 for the four door saloon with "sunshine" roof and leather seats. Bumpers and indicators were £2 10 shillings (£2.50) extra.

Compared with the similarly priced, but much lighter and longer established Austin 7, the 1934/35 Morris Eight was well equipped. The driver was provided with a full set of instruments including a speedometer with a built in odometer, oil pressure and fuel level gauges and an ammeter. The more modern design of the Morris was reflected in the superior performance of its hydraulically operated 8 inch drum brakes.The Morris also scored over its Ford rival by incorporating an electric windscreen wiper rather than the more old-fashioned vacuum powered equivalent, while its relatively wide 45 inch track aided directional stability on corners.

The Series I designation was used from June 1935 in line with other Morris models, cars made before this are known as pre-Series although the official Morris Motors designation was by the model year (35) even though they were introduced in October 1934. Of the 164,102 cars produced approximately 24,000 were tourers. 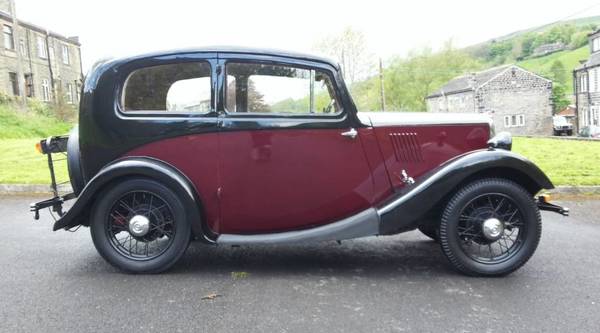