The MG F and later MG TF are mid-engined, rear wheel drive roadster cars produced from 1995 until 2011. The MG F, designed and produced by Rover Group, was the first all-new car to bear the MG marque since the MG MGB that was produced from 1962 to 1980. Production of the MG TF paused in 2005, when MG Rover went into receivership, and resumed in 2007 under the company's new owners Nanjing Automobile of China.

MG had stopped producing sports cars in 1980 when British Leyland closed their Abingdon, Oxfordshire plant, although the MG badge was used on badge-engineered hatchbacks and saloons between 1982 and 1991. In 1992, the company (by this time Rover Group) restarted production of the classic MGB as the limited-edition RV8, and positive reaction led the company to develop the MG F. It was revised and renamed using the historic TF name in 2002, but production was halted following the collapse of the MG Rover Group in 2005. However, after Nanjing Automobile Group acquired the rights to the MG TF, the completion of the new MG factory in Nanjing saw production being restarted in March 2007.

The MG F was launched in the autumn of 1995 by the Rover Group, making it the third all-new car to be launched in its first full year since the BMW takeover. It was powered by a 1.8 L K-Series 16-valve engine, the basic having 118 hp (87 kW) while the more powerful VVC (variable valve control) had 143 hp (107 kW). Rover Special Projects oversaw the development of the F's design and before finalising the styling bought-in outside contractors to determine the most appropriate mechanical configuration for the new car. Steve Harper of MGA Developments did not produce the initial design concept in January 1991 (inspired by the Jaguar XJR-15 and the Ferrari 250LM), before Rover's in house design team refined the concept under the leadership of Gerry McGovern. An interesting feature of the F was its Hydragas suspension, a system employing interconnected fluid and gas displacers which provided a surprisingly compliant ride but which could be tuned to provide excellent handling characteristics. The MG F quickly shot to the top of the affordable sports car charts in Britain and remained there until the introduction of the MG TF in 2002.

The MG F underwent a facelift in Autumn of 1999 and gave the car a revised interior as well as styling tweaks and fresh alloy wheels designs. There was also the introduction of a base 1.6 version and a more powerful 160 hp (119 kW) variant called the Trophy 160, which had a 0-60 mph time of 6.9 seconds. It was only produced for a limited time.

An automatic version with a CVT called the Steptronic was also introduced. The MG F continued to sell well in spite of the sale of the Rover Group, which was announced in March 2000. Land Rover was sold to Ford, while the MG and Rover marques were sold to the Phoenix consortium for £10.

In spite of competition from the likes of Mazda MX-5, BMW Z3 and Audi TT, the MG F still proved fairly popular.

Project EXF represents a limited production of five single-seat MG F sports cars that allude to historic land-speed records set by MG between 1930 and 1959. Known simply as the F, the MG car features largely standard MG F components, a turbocharged 1.4L (329 bhp) Rover K-Series engine, and a drag coefficient of less than 0.25. On the 20th August 1997, the F achieved a top speed of 217 mph (349 km/h) at the SpeedWeek festivities in Bonneville, Utah, USA.

In 2002 the MG TF was released, named after the MG TF Midget of the 1950s. Based upon the MG F platform but heavily redesigned and re-engineered, the most significant mechanical changes were the abandonment of Hydragas suspension in favour of conventional coil springs, the new design of the air-induction system that along with new camshafts produces more power than in MG F engines, and the torsional stiffness of the body increased by 20%. Various cosmetic changes include a revised grille, redesigned front headlights, bumpers, side air-intake grills, rear boot, etc. The MG TF was the first car of its class to be awarded a leading 4-star safety performance from Euro NCAP.

It held a decent amount of sales despite its listed problems, most common of which was the uneven shut lines on the drivers door on uk models. Production was suspended in 2005 when MG Rover collapsed.

In March 2007, Nanjing Automobile Group, which bought MG Rover's remaining assets during bankruptcy proceedings, restarted production of the MG TF at its Nanjing factory, with a capacity of 200,000 cars a year. Experts from the Longbridge factory were involved in building the new TFs in Nanjing.

In August 2008, more than three years after the facility had closed due to MG Rover's bankruptcy, assembly of a lightly revised MG TF model for the European market, from Chinese-built complete knock down (CKD) kits, was started by NAC MG UK at Longbridge.

The first TF model to be produced by NAC MG UK was the TF LE500. As the name suggests this was a limited edition of 500 cars each individually numbered. The better suspension set-up and the heated rear window from the 2005 model TF were carried over to the LE500, however, various changes were made including a restyled front grille and bumper. The LE500 specification includes leather seats, hard top and soft top, wind stop, CD tuner with MP3 compatibility, rear parking sensors, 16-inch 11-spoke alloy wheels, and front fog lights. It was priced higher than a modern Mazda MX5 despite its few changes from 1995, which had a large negative effect on sales.

The LE500 was followed by a TF 135 model and a further limited edition TF 85th Anniversary, of which only 50 were produced.

Production of the TF at Longbridge was suspended again in October 2009 due to low demand in face of the recession. Production resumed in the new year, but the end of production was finally announced in March 2011 due to lack of demand and component supply problems. A total of 906 TFs were produced at Longbridge under Chinese ownership. A new sports car to succeed the TF, however, is being planned for a possible 2013 launch.

Throughout its production, the MG sold successfully - which includes outselling the Mazda MX-5 and Toyota MR2 in the UK. In a number of road tests the MGF impressed and was a match to its main rivals the Mazda MX5 and BMW Z3 in terms of handling, performance and practicality, but the MG F just missed out in standards of build quality, reliability and UK dealer support which is probably due to the amount of investment its Japanese and German rivals were putting into the market at the time.

However, after Nanjiing took over and restarted production, the car's sales plummeted until production was eventually ceased in March 2011. Parkers gave the car 2.5/5 and said its pros were "Styling, handling and brand heritage" and cons were "Dated interior, patchy build quality and poor reliability." This is unsurprising given the basic design was by now over 16 years old. WhatCar? gave it 2/5 saying its pros were that it's "pretty and affordable" but its cons were "The driving position and steering are not what you'd expect in such a sporty car." AutoExpress reviewed it after Nanjiing took over and also had a 2/5 verdict, liking how it was "well equipped and compact" but disliking how it was priced more expensive than a basic Mazda MX5, stating it has "barely changed since 1995 and can be mistaken for a much older vehicle" and also commenting on its cramped interior.

The K-Series engine used in the MG F has gained a reputation for head gasket trouble.This is due to a range of problems including build tolerances, block face stiffness, casting quality, gasket material and cooling system layout. A number of changes were made over the years to improve the condition. Because of this, the MGF and TF have a higher reliability index than their Toyota and Mazda rivals in the same class, which actually means that the car is less reliable.

Despite this, the MGF and TF models are in reality usually major fault free with the head gasket the only model-specific downfall It should be noted however that the later head gasket design, which consists of a multiple layer metal gasket or "MLS", is widely reported to dramatically reduce or completely remove the chance of a head gasket failure, with cars fitted with these gaskets rarely suffering from a failure. It is now standard fit to K Series engines in Ford Land Rovers when Ford deal with a head failure. 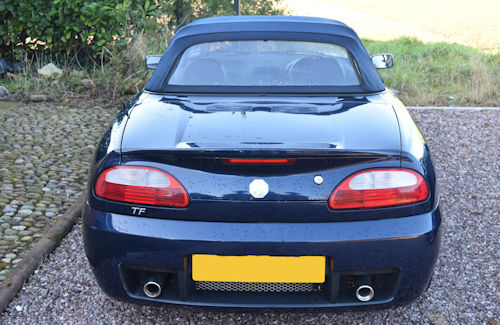