The introduction of the Cougar finally gave Mercury its own pony car. Slotted between the Ford Mustang and the Ford Thunderbird, the Cougar would be the performance icon and eventually the icon for the Mercury name for several decades. The Cougar was available in two models (base and XR-7) and only came in one body style (a two-door hardtop). Engine choices ranged from the 200 hp (149 kW) 289 in3 two-barrel V8 to the 335 hp (250 kW) 390 in3 four-barrel V8. A notable performance package called the GT was available on both the base and XR-7 Cougars. This included the 390 in3 V8, as well as a performance handling package and other performance enhancements.

The 1967 Cougar, with the internal code T-7, went on sale September 30, 1966. It was based on the 1967 refaced first-generation Mustang,but with a 3-inch-longer (76 mm) wheelbase and new sheet metal. A full-width divided grille with hidden headlamps and vertical bars defined the front fascia—it was sometimes called the electric shaver grille. At the rear, a similar treatment saw the license plate surrounded on both sides with vertically slatted grillework concealing taillights (with sequential turn signals), a styling touch taken from the Thunderbird. A deliberate effort was made to give the car a more "European" flavor than the Mustang, at least to American buyers' eyes. Aside from the base model and the luxurious XR-7, only one performance package was available for either model: the sporty GT. The XR-7 model brought a simulated wood-grained dashboard with a full set of black-faced competition instruments and toggle switches, an overhead console, a T-type center automatic transmission shifter (if equipped with the optional Merc-O-Matic transmission), and leather/vinyl upholstery. 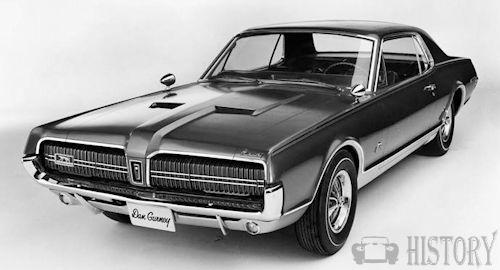 The GT package, meanwhile, supplied a much larger engine, Ford's 390-in3 (6.4 L) FE-series big block to replace the small-block 289-in3 (4.7 L) standard powerplant. Along with this came an upgraded suspension to handle the extra weight of the big engine and give better handling, more powerful brakes, better tires and a low-restriction exhaust system. Introduced with the music of Herb Alpert and the Tijuana Brass' The Work Song, the Cougar was a sales success from its introduction and helped the Lincoln-Mercury Division's 1967 sales figures substantially. The Cougar was Motor Trend magazine's Car of the Year for 1967.

The Cougar continued to be a Mustang twin for seven years, and could be optioned as a genuine muscle car. Nevertheless, it gradually tended to shift away from performance and toward luxury, evolving into something new in the market — a plush pony car. The signs were becoming clear as early as 1970, when special options styled by fashion designer Pauline Trigère appeared, a houndstooth pattern vinyl roof and matching upholstery, available together or separately. A reskinning in 1971 saw the hidden headlights vanish for good, although hidden wipers were adopted. Between 1969 and 1973, Cougar convertibles were offered.

Not much changed for the Cougar in its second year. The addition of federally mandated side marker lights and front outboard shoulder belts were among the minor changes, but the biggest changes were under the hood and in performance for the XR-7 model. A 210 hp (157 kW) 302-in3, two-barrel V8 was the base engine on all XR-7s and early standard Cougars. Three new engines were added to the option list this year: the 230 hp (172 kW) 302-in3, four-barrel V8; the 335 hp (250 kW) 428-in3, four-barrel V8; and the 390 hp (291 kW) 427-in3, four-barrel V8. In addition, the 289-in3 engine was made standard on base cars without the interior decor group midway through the model year.

There were many comfort and performance options available for the Cougar, including (at least by 1968, tilt and telescoping?)steering wheel and a power driver's seat that could be swiveled for ease of entry/egress.

The third year of production, 1969, brought several new additions to the Cougar lineup. A convertible model was now available in either standard and XR-7 trim. These highly anticipated soft tops proved quite popular and today are considered, by many, among the most desirable of the '67-'70 production run. On the exterior, the grille switched from vertical bars to horizontal bars, and a spoiler and a Ram Air induction hood scoop were added as options. A new performance package appeared and several disappeared. The XR-7G and the 7.0-L GT-E disappeared, but the 390 and 428 V8s remained. The 290 hp (216 kW) 351 Windsor V8 was added to the engine lineup. The Eliminator performance package appeared for the first time. A 351-in3 four-barrel V8 was standard under the hood, with the 390 four-barrel V8, the 428CJ and the Boss 302 available as options. The Eliminator was the new top-of-the-line performance model of the Cougar lineup. It also featured a blacked-out grille, special side stripes, front and rear spoilers, an optional Ram Air induction system, and a more performance-tuned suspension and handling package. It also came in a variety of vibrant colors, such as White, Bright Blue Metallic, Competition Orange, and Bright Yellow. Only two Cougars came with the Boss 429 V8, making them the rarest Cougars ever built. Both were factory drag cars built for "Fast Eddie" Schartman and "Dyno" Don Nicholson.

For 1970, the Cougar appearance was similar to the 1969 model, but numerous changes were made inside and out. It now sported a new front end which featured a pronounced center hood extension and electric shaver grille similar to the 1967 and 1968 Cougars. Federally mandated locking steering columns appeared inside, and the aforementioned new nose and taillight bezels updated the look on the outside. The 300 hp (224 kW) 351 "Cleveland" V8 was now available for the first time, though both the Cleveland and Windsor engines were available, if the buyer selected the base model two-barrel motor. The 390 FE engine was now dropped, and the Boss 302 and 428CJ soldiered on.

On Her Majesty's Secret Service a Mercury Cougar XR7 driven by  Contessa Teresa de Vicenzo (née: Tracy Draco, Tracy Bond) Red on Red 1969 Convertible, Driven by Tracy onto a Portuguese beach where she attempts suicide, later in a winter stock-car race on an ice-covered track to help Bond escape from Blofeld's henchmen and Irma Bund.