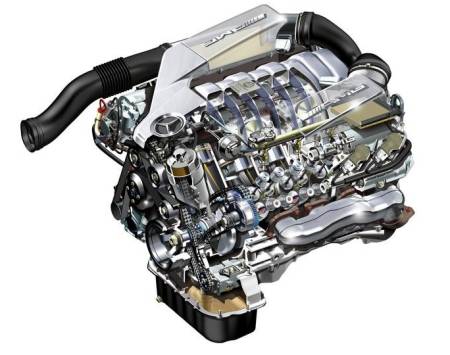 The engine was introduced in 2006 in the E-Class (model series 211) with the model designation E 63 AMG and some time later in other models. Most recently, the new engine was used in the facelifted SL . As in most series, it replaced the V8 supercharged engine of the M 113 series . The engine has a stepless phase adjustment of all four camshafts.

When the M 156 was presented by Mercedes-AMG GmbH in July 2005, it was the world's first engine with cylinder liners coated with electric arc spraying (LDS). The NANOSLIDE® technology developed and named by Mercedes significantly reduces the friction losses compared to gray cast iron bushes.

The M 156 has a capacity of 6208 cc and produces, depending on the model variant, an output between 336 and 386 kW (457 to 525 hp). In the 38th calendar week of 2008, the 40,000th M 156 built. Furthermore, AMG relies on the principle of "one man, one engine", which means that an engine is completely assembled by a single AMG employee. At the end of the production cycle, the engine receives a sticker with the name of the respective mechanic.

The M156 is the first V8 automobile engine designed autonomously by Mercedes-Benz subsidiary Mercedes-AMG, as previous AMG engines have always been based on original Mercedes engines. The engine was designed to be a naturally aspirated racing unit, and will also be used in a number of high-performance "AMG"-badged Mercedes-Benz models.

Although this engine displaces 6.208 liters, the engine is marketed as the "6.3" to commemorate the famed Mercedes-Benz M100 engine, Mercedes' first production V8 which initially displaced 6.3L. 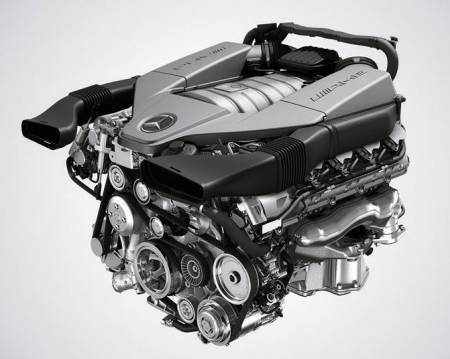 Mercedes has claimed it is the world's most powerful naturally aspirated V8 engine.

The Mercedes-Benz SLS AMG sports car uses an enhanced variant called the M 159 . For the power increase to 420 kW (571 hp), 435 kW (591 hp) in the SLS GT and 464 kW (631 hp) and 650 Nm of torque in the Black Series model, the engine was thoroughly revised, especially the pistons (forged), the crankcase (aluminum) and the intake system (magnesium). In addition, the engine is equipped with dry sump lubrication

It is a version used in Mercedes-Benz SLS AMG. Compared to the standard AMG engine, the SLS's engine includes an all-new intake system, reworked valve train and camshafts, the use of flow-optimised tubular steel headers and dethrottling of the exhaust system. The engine also utilizes a dry-sump lubrication system to lower the center of gravity of the car.