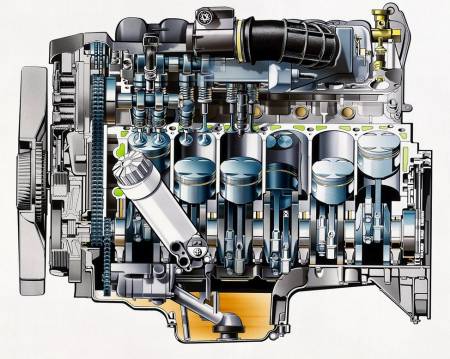 In the mid-1980s, Daimler-Benz began development work on a new S-Class, which was to be presented in 1991.

The motor type M 120 is a twelve-cylinder - V engine of Daimler-Benz and the first series-produced car twelve-cylinder of the brand Mercedes-Benz . The gasoline engine with 6 liters displacement and four-valve technology was used from 1991 to 1998 in the saloons and coupes of the series W 140 / C 140 , later also in the SL series R 129 .

The engine type was replaced in 1999 by the slightly smaller and lighter M 137 for use in the S-Class 220 series (later also in other model series) . The M 120 is also used in an optimized form as the M 297 in some sports cars and luxury sedans , for example in the Pagani Zonda , the Mercedes-Benz CLK GTR and the Lotec Sirius . The Mercedes-Benz C 112 test vehicle was equipped with the M 120 and used with manual six-speed gearbox for test and test drives

In the market segment of luxury sedans only the British brand Jaguar had in 1972 from the XJ Mk I a V12 on offer, otherwise twelve-cylinder engines were a domain of sports car manufacturers such as Ferrari and Lamborghini .

For the series 126 in production, a twelve-cylinder engine for a projected "600 SEL" had been developed in addition to the proven M 117 V8 engines . However, it seemed unwise to present such a large engine in the aftermath of the oil crisis in 1974, and Daimler decided not to release it for mass production.

In 1988 Dr.-Ing. Kurt Obländer commissioned to develop a twelve-cylinder engine for the 1991 appearing new S-Class 140 series , which should far exceed the Bavarian engine in terms of horsepower and displacement and should develop at least 294 kW (400 hp). At this time, a new 5.6-liter V8 engine with four-valve technology and nearly 400 hp under the code M117 / 9 was already developed, which initially produced the tuning company (and later Daimler subsidiary) AMG alone. Later, these units were manufactured together with Daimler-Benz in a simplified design and installed for solvent customers in coupe and saloon series 126.

At the same time Oblander had developed for the initially planned model "800 SEL" of the W 140 an eight-liter V16 with approximately 540 HP ready for series production, before the series introduction Daimler-Benz but then recoiled, similar to before the introduction of the V12 engine in the predecessor W 126 ,

The new six-liter V12 introduced with the W 140 series produced 300 kW (408 hp). This engine was not only the first mass-produced passenger car twelve-cylinder from Mercedes-Benz, it was also the most powerful Mercedes-Benz passenger car engine to date. The maximum torque is 580 Nm and already exceeds the 500 Nm mark at 1600 rpm. The V12 is equipped with a camshaft adjustment of the intake camshafts and a fully electronic Bosch injection system with hot-wire air mass meter ( LH-Motronic ).

In engine development, the focus was on minimizing pollutant emissions and fuel consumption. The electronic ignition calculates the optimum ignition timing from 300 ignition maps, adapted individually for each cylinder and to the knock limit. As the only twelve-cylinder in the world, the M 120 has this cylinder-selective anti-knock control. This is the only way to achieve the high compression ratio of 10: 1 required for optimum fuel efficiency. New was the engine and drive management, in which all control modules via a common data channel ( CAN bus) communicate with each other. This is used, inter alia, for rapid heating of the catalytic converters after cold starting of the engine, also for traction control and for the new engine drag torque control, which prevents a car from breaking out on slippery roads due to gas release.

The exhaust system of the engine houses the world's largest catalyst system for passenger cars. It was dimensioned with a volume of seven liters in such a way that no additional fuel consumption occurs due to the catalyst and a high long-term stability is ensured. Thanks to a novel concept of double-walled and three-layer insulated exhaust manifolds and likewise double-walled supply lines, the ceramic catalysts embedded in a heat-insulated swelling mat reach their operating temperature within a short time.

After public criticism was loud, Daimler-Benz renounced in September 1992, three years after completion of the M 120, on the mixture enrichment at full load, which injected more gasoline than for the conversion of pollutants was allowed. The manufacturer modified the engine control, which resulted in a power loss of 1/30 (3.33%) or 10 kW (14 hp) to 290 kW (394 hp) and a small reduction in torque to 570 Nm.

The M120 family is built in Stuttgart, Germany. It has an aluminum engine block lined with silicon/aluminum. The aluminum DOHC cylinder heads are 4 valves per cylinder designs. It uses SFI fuel injection and features forged steel connecting rods.

Tuning companies also worked on the M 120. From Brabus , Lorinser , Koenig Specials, Renntech, Väth and Carlsson , there were the twelve-cylinder with displacements between 7.2 and 7.4 liters. Very well known is the Brabus 7.3S with an output of 428 kW (582 hp). The power range goes up to the lesser-known Carlsson RS74 Le Mans with up to 456 kW (620 hp). The torque of the various displacement versions ranges from 720 to 850 Nm.

From the M 120, there are also two complex conversions to the turbo engine. The Lotec GmbH in Kolbermoor left it with the standard six-liter capacity, but installed two turbocharger exhaust gas (K 27) complete with intercooler and installed the engine in the Lotec Sirius . It develops an output of 735 kW (999 hp) and a torque of 1100 Nm at 0.85 bar boost pressure. With 1.2 bar boost pressure available at short notice, it is 883 kW (1,201 hp) and 1320 Nm. For comparison, the Bugatti Veyronsupercar with an 8-liter, sixteen-cylinder engine and four turbochargers achieves 736 kW (1,001 hp) and 1250 Nm.

Another version of the turbocharged M 120 comes from the Russian tuner A-Level. This engine achieves 616 kW (838 hp) through twin turbocharging and an increased displacement of 6.7 liters, developing 1182 Nm of torque. This engine was installed in an S-Class coupe of the C 140. The Lotec Sirius and the S 600 Coupé A-Level are unique pieces.

Today, hardly a tuner on compressor or exhaust gas turbocharger to increase performance, since they are much more economical, unlike the large displacement versions of a naturally aspirated engine, have a higher efficiency and thus consume less fuel in relation to the power. The issues of durability, comfort and delayed power delivery (" turbo lag ") have now been solved satisfactorily, so that these engines found their way into the sedans of Mercedes-Benz and Maybach .

Larger engines than the M 120 C 74 from Carlsson (7414 cm³) will hardly be developed in Germany for passenger cars in the future, as the discussions about CO 2emissions, gasoline prices, fuel consumption and alternative drive technologies are increasingly coming to the fore. Since about 2008, the trend towards "downsizing" with smaller, lighter and more economical engines has been at Daimler AG in particular, so that since the introduction of the 221 series, a four-cylinder diesel engine has also been offered in the S-Class. 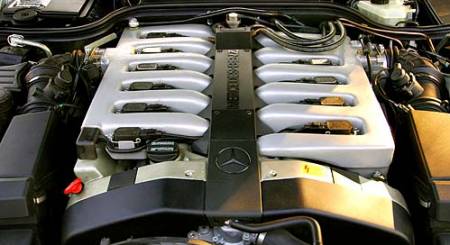 In 1997, the FIA GT Championship race car Mercedes-Benz CLK GTR was fitted with an engine derived from the M120. The 25 road cars, required by the FIA rules and delivered in 1999, had their engine enlarged to 6.9L.

The 7.3L M120 engine was also featured in the AMG-built, S73 T Kombi, a custom-built, W140, S-Class wagon built for the Sultan of Brunei. Eighteen units were produced, ten of which went to the Sultan. 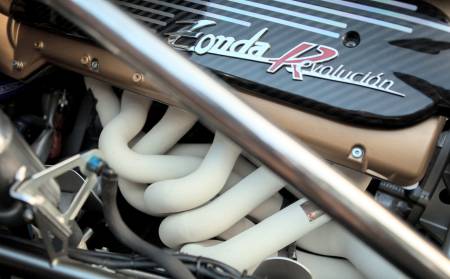