The Mazda Familia, also marketed as the Mazda 323 and the Mazda Protegé, is a small family car that was manufactured by Mazda between 1963 and 2003. The Familia line was replaced by the Mazda3/Axela for 2004.

It was marketed as the Familia in Japan. In the export, earlier models were sold with nameplates including: 800, 1000, 1200, and 1300. In North America, the 1200 was replaced by the GLC, with newer models becoming 323 and Protegé. In Europe, all models after 1977 were called 323. In South Africa, it was marketed as the Étude, and in Colombia the 8th generation was called Allegro.

The Familia was also rebranded as the Ford Laser and Ford Meteor in Asia, Oceania, some Latin American countries and, from 1991, as the Ford Escort and Mercury Tracer in North America.

Familias were manufactured in Hiroshima, Japan and were also assembled in various countries including Taiwan, Malaysia, South Africa, Colombia, and New Zealand

Mazda's automotive plans for the early sixties consisted of growing alongside the Japanese economy. To achieve this goal, they began by building an extremely cheap Kei car, the R360 in 1960, planning on introducing gradually larger and pricier cars as the Japanese customers became able to afford them. As a preview, testing the waters, a larger "Mazda 700" prototype was shown at the 8th Tokyo Motor Show in 1961, and formed the basis for the upcoming Mazda Familia. Meanwhile, the slightly more upmarket Mazda Carol appeared in 1962

The first production Familia, styled by young Giorgetto Giugiaro while working at Carrozzeria Bertone, appeared in October 1963. In line with Mazda's policy of only gradually approaching the production of private cars (a luxury in Japan at the time), the first Familia was initially only available as a commercial two-door wagon called the Familia Van. The van was joined in April 1964 by a plusher Familia Wagon, in October by a 4-door sedan, and in November by a two-door sedan. The "Flat Deck" design of the sedan versions was reportedly inspired by the Chevrolet Corvair Private car versions received foglights in the grille as well as more chrome trim. The Familia was sold in other markets as the 800.

The new Familia appeared in 1967 with the same pushrod 987 cc engine as used in the previous generation sedans. It was sold as the Mazda 1000 in some markets. A larger 1,169 cc I4 engined version came along later, becoming the Mazda 1200 for export. In this form, the car was first exhibited in Europe at the 1968 Paris Motor Show in the Autumn/Fall of that year.

From 1970 on the Familia was also available with the new overhead camshaft 1.3 L TC engine, derived from the smaller 1 liter OHC engine already seen in the first generation Familia Coupé. This, exported as the Mazda 1300, replaced the 1200 model in most markets. The sedan and coupé were updated in the autumn of 1973, but the truck and wagon/van versions continued with little change. The vans and pickup trucks actually soldiered on until 1978, by which time a Van/Wagon version of the succeeding FA4 Familia (323/GLC) had been introduced. The later pickup versions were also available in a long-wheelbase version, and featured a 85 PS (63 kW) (SAE) version of the 1.3-litre TC engine, unaffected by the tighter Japanese emissions standards for passenger cars.

The September 1973 Familia Presto (FA3) was an updated version of the second generation Mazda Familia, with somewhat wider bodywork and reworked front and rear designs. These changes were made only to the sedans and coupé, with the van/wagon and trucks retaining the original bodywork. Developed to meet new stricter emissions standards in the domestic market, the Presto featured the 1,272 cc TC engine or the by now familiar pushrod 1 liter PB unit. Power outputs in Japan (gross) were 83 PS (61 kW) and 62 PS (46 kW) respectively. The Rotary Coupé was discontinued, having been replaced by the larger Grand Familia-based RX-3/Savanna.

Familia AP (323 in most of the world, GLC or Great Little Car in North America) debuted in January 1977 as a rear-wheel-drive subcompact, replacing both the Grand Familia (818) and the preceding Familia (1000/1300). There was a choice of hatchbacks and station wagon bodies, both available with a 3- or 5-door bodystyle. The Station Wagon/Van version was a bit later, first being introduced in June 1978, which also meant that the commercial versions based on the 1970 Familia could finally be retired. Three Mazda engines were available, the 985 cc PC, 1,272 cc TC, or 1,415 cc UC. The little one-liter unit was only made for export markets. The new Familia shared many parts with the older Mazda Grand Familia. This was the first appearance of the 323 name, for export markets only.

In June 1979 the 323/Familia underwent a facelift, replacing the previous round headlights with rectangular units which were designed as a single unit along with the grille. Other minor differences occurred along with the facelift. In South Africa a 1,600 cc model was available – however this model did not have a Mazda engine, unlike the rest of the range. To satisfy that country's local content regulations, a Mitsubishi Saturn 1.6-litre unit was used.

The range was replaced in 1980, however the station wagon models continued in production until 1986. In 1981 a facelift was given to the wagon range, to give a front end treatment similar to Mazda's front-wheel drive 323/Familia range.

The BD Familia, first shown on 2 June 1980, was entirely new – it was Mazda's first front-engine, front-wheel drive subcompact car. It was available as a hatchback and sedan. It was developed with input from Ford, which in 1979 had acquired a stake in the Japanese manufacturer, and had a twin called the Ford Laser (and Ford Meteor, for its four-door model in Australia). The new Mazda E engine-series, loosely based on the preceding PC/TC/UC series, was developed expressly for the BD and was offered in three different displacements. The smallest 1.1-liter E1 unit was reserved for certain export markets where the tax structures suited it. Chassis codes were BD1011/BD1031/BD1051 depending on the engine installed.

In January 1985, the fifth generation Familia/323 featured many updates. It was available as a hatchback or sedan only for the first year, a wagon being added in November 1985. In January 1987 a personal coupé version with its own bodywork, the Étude, was added. In February 1987 the Familia range underwent a light facelift that included replacing the old E engines with the more modern B series.

The 1985 Familia spawned a Ford Laser twin sold in the Asia-Pacific. The Laser sedan and wagon were nearly identical to the Familia but with a Ford grille. By contrast the Laser hatchback model, which was sold in the U.S. as the Mercury Tracer used completely different panels from the Familia's.

The sixth generation of Familia (BG) included a three-door hatchback, five-door fastback, and a four-door sedan variants, none of which shared any body panels. The new five-door fastback version was called the Familia Astina in Japan and was sold as the 323F or 323 Astina elsewhere. The BF wagon (originally introduced in 1985) was carried over in facelifted form, although Ford marketed a wagon on the new platform as part of the North American Escort line.

The BG Familia was available with front- or all-wheel drive and a 1.3 L, 1.5 L, 1.6 L, or 1.8 L gas or 1.7 L diesel engine. Later, a turbocharged engine was added, especially developed for homologation purposes for the World Rally Championship, Group A category. In North America, the 323 sedan became the Protegé, while the 323 hatchback kept its name. The four-wheel drive models (including the turbocharged GT-X) were introduced in August 1989. In Japan, the SOHC 1.6 was only available coupled to four-wheel drive. With a carburettor, it offered 91 PS (67 kW), the same as the lower-spec 1.5, but with a somewhat meatier torque curve.

The BH model was released for the Japanese Domestic Market in 1994 with both front-wheel drive and all-wheel drive. Production of this generation started on August 8, 1994, and ceased on June 18, 1998.

An unusual JDM model appeared in 1994, with the cancellation of the 1985-generation station wagon. The Mazda Familia Van offered after this year was a rebadged Nissan Wingroad/Sunny California, which was essentially the station wagon version of the Nissan Sunny N14.

The Familia/Protegé/323 was facelifted in 1996, with a newer style.

A redesigned eighth generation BJ Familia was introduced on June 9, 1998 and released on September 29, 1998 as a 1999 model. Body styles included a four-door sedan, five-door S-Wagon (sold as the Protegé5 in the United States and Canada, and Astina NU in some Asian countries), three-door hatchback. In Japan there was also a traditional five-door Wagon sold, but this car is simply a rebadged Nissan. A 4EC automatic transmission and two five-speed manual transmissions were available. All-wheel drive is optional. 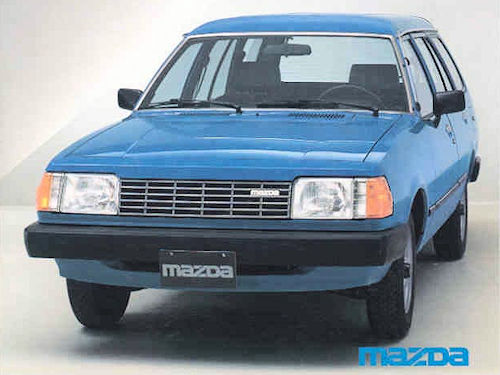