The Maserati Biturbo (Tipo 116) is a sports car introduced by Maserati in 1981. The Biturbo is a two-door, four-seater notchback coupé (of somewhat smaller dimensions than the BMW 3 Series of the time) featuring, as the name implies, a two-litre V6 engine with two turbochargers and a luxurious interior. The car was designed by Pierangelo Andreani, an engineer from the De Tomaso team, somewhat influenced by the design of the newer Quattroporte III (Italdesign Giugiaro), as can be observed on the front fascia.

All Maserati models from the Biturbo's introduction in 1981 until 1997 (except the Quattroporte III) were based on the original Biturbo architecture, among them the four-door 420/425 and 4.24v, the Spyder, the Karif, the 228 and 2.24v, the Maserati Racing and the later Shamal and Ghibli II, as well as Maserati Barchetta which used an ultimate version of the V6 engine.

When Alejandro de Tomaso acquired Maserati in 1976, he had ambitious plans for the marque. His plan was to combine the prestige of the Maserati brand with a sports car that would be more affordable than the earlier high-priced models that had traditionally made up the Maserati range. In fact, Maserati ceased making supercars like the ones developed under Citroën ownership altogether, like the Bora and Khamsin.

The Biturbo was initially a strong seller and brought Italian prestige to a wide audience, with sales of about 40,000 units. Sales figures fell in subsequent years. De Tomaso also used another of his companies, Innocenti, to produce Biturbo body panels and also to provide final assembly of Biturbos. De Tomaso later sold Maserati to Fiat, who grouped the company with their erstwhile rival Ferrari.

The first Biturbo version was introduced in December 1981 as a two-door coupe. The Biturbo name disappeared when the car was significantly redesigned in 1988 and after 1994 became the Ghibli II. 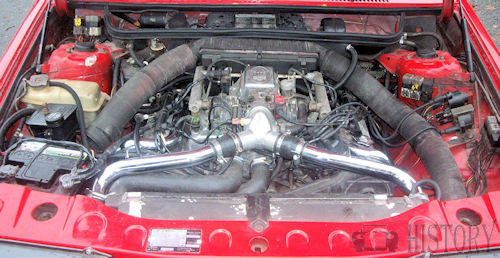 Two years after Biturbo introduction was unveiled a four-door family version. This version has a longer wheelbase, 2.6 metres (100 in). The four-door version was replaced in 1994 with the Maserati Quattroporte IV.

The Spyder (Tipo 333) version was introduced at the Turin Motor Show in 1984. The car was designed and built by Zagato, their first work for Maserati since the A6G/2000 of thirty years earlier. Also Carrozzeria Embo was commissioned to develop a four-seater cabriolet version of the Biturbo, but this never made it into production. The Spyder version has a shorter wheelbase, 2.4 metres (94 in). Still, since it is a strict two-seater with folding rear seats, the luggage space is larger than in the original Biturbo. On this shorter chassis the sporty hardtop Karif was later developed. Overall 3,076 were built over a ten-year period, setting a production record for Maserati Spyders. 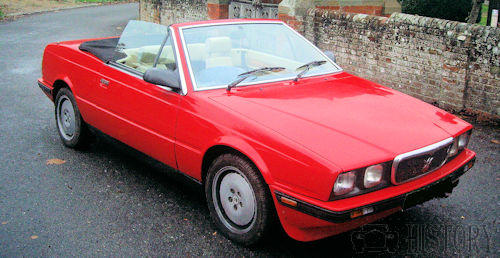 The Maserati 228 is a two-door Gran turismo model, targeting the same markets as had earlier bought 3500 GTs and Mexicos. The 228 was introduced at the 1986 Turin Motor Show, it uses the longer four-door chassis and the bigger 2.8-litre biturbo engine in a two-door coupe form with a more luxurious interior than the usual two-door cars. 469 examples of the 228 were built up until 1992. 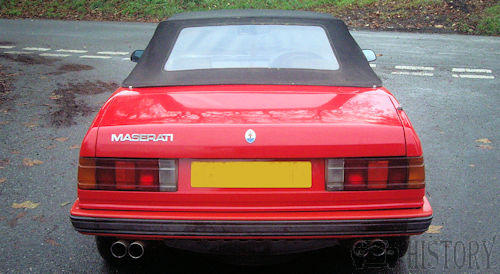 1987 Maserati Biturbo 425i in Licence to Kill. Driven by Franz Sanchez