The First Datsun 200B , built as 4 door sedan , a 5-door station wagon and two-door hardtop - Coupe with Japanese designs completely imported from Japan. The coupe was called SSS. From January 1978, the sedan was made in Australia, the station wagon followed a little later. The sedan was available in the equipment variants GL and GX, the coupe only as a hardtop, but - unlike its predecessor - with a round window in the C-pillar. 1979, the delivery of the coupe was set to Australia.

Almost immediately after the launch of the 200B Australia's best-selling four-cylinder car and remained until the appearance of the Mitsubishi Sigma . Also, the car remained popular throughout its production time, especially family fathers appreciated the large interior and the good standard equipment. Maybe the 200B looked a bit conservative, but Nissan made sure it was reliable and durable, qualities that Australian buyers valued more than an advanced design.

Only the early, fully imported from Japan limousines and coupes retained the rear independent suspension of the 180B. The Australian made 200B instead received coil springs and trailing arms, while the station wagon had a rigid axle with leaf springs. This technical change was seen as a major step backwards, but not because of cost savings, but because of the need to use 85% of the Australian-made parts, so that Nissan was considered an Australian manufacturer under the rules of the then government. But especially the rear rigid axle, which was developed in Australia, proved to be an advantage for the handling of the cars.

The biggest disadvantage of the 200B was its high noise level. The 2.0 l- ohc engine ran very loud in the upper rpm range and this was accompanied by considerable vibrations from the drive. The complaints about this resulted in a revision of the exhaust tract by the Japanese manufacturer and so ran the later models a little quieter. 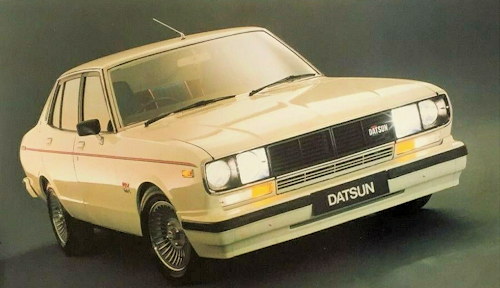 A sporty version of the sedan came out in June 1978. The new SX had a revised grille, a front spoiler, aluminum rims, a modified interior (striped fabric inserts in the seats) and a tachometer, The chassis was also modified to achieve better driving characteristics. The new model was available in the paint colors blue, red and white and there was only a four-speed manual transmission with middle circuit. The SX was a model made in Australia only and marked the step away from the mere assembly of cars constructed in Japan. This in turn meant that future Datsun and later Nissan models were redesigned on-site to better meet Australian needs. Many components of these cars were sourced from Australian suppliers, a tradition that Nissan maintained until the abandonment of the Australian manufacturing facility in 1991.

In October 1979, a revised 200B appeared with new grille, bumpers, exterior trim and dashboard. The seats were a purely Australian construction and were also built in the country. This facelift was done by Paul Beranger, a former Holden designer. In 2006 he constructed the Toyota Aurion .

In 1980, a special model 200B Aspen GL came out as a sedan in special, muted paint colors - green, blue and gray. Both the 180B and the 200B were very popular with Australian riders, although today hardly any of these models can be seen on the road. Soon these vehicles will be very much sought by enthusiasts, but there are hardly any.The manufacture of the 200B was discontinued in May 1981. His successor was the Datsun Bluebird 910.

This model came out in 1977 in New Zealand and was built there from CKD sets as a 4-door sedan and 5-door station wagon. Also a 2-door coupe, which was completely imported from Japan, was available. Unlike in Australia, the sedans had the independent rear suspension as the Japanese versions.In the first months of production, the cars still had the 1.8-liter engine and therefore were also called 180B .

In the course of 1978, some modifications were made to this model, in particular a 2.0-liter engine (which gave the model 200B ) and a small facelift with a new grille and rectangular headlamps. To accommodate the New Zealand predilection for weaker motorized cars brought out a model with 1.6 l engine, which was offered as 160B . 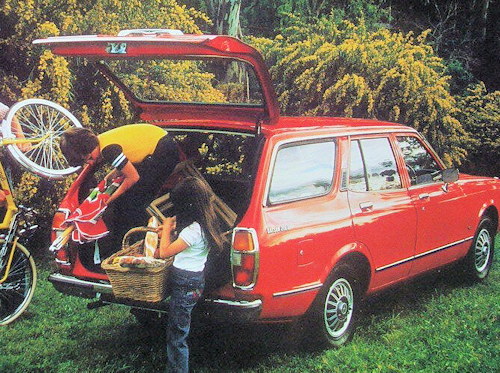