The DAF Pony was a small pickup truck of the Dutch manufacturer DAF , from which 700 were built between 1968 and 1969.

The pony was the result of a development for the America in 1964 army some prototypes built of an all-terrain 4x4 vehicle with an automatic drive.an unsuccessful tender of the US Army.

The project was eventually awarded to an American company,the plans were for a more commercial vehicle,the DAF Pony. It was equipped with a modified 2-cylinder boxer engine and the Variomatic of the DAF 44 . Were built flatbed and as a larger tractor unit .

The DAF-PONY was a very versatile vehicle and yet very simple in construction. In this uniquevehicle are the DAF-44 engine and its versatilepartner applied the Variomatic.The engine is located directly behind the cab in the chassis the window hung right at front, resulting in a spacious cabin,good weight distribution and a compact.The maximum speed and cruising speed is 70 km/h.Gearbox  the Variomatic. This stepless automatic transmission consists of two pairs of disks, each connected byan endless V-belt, which drives themotor independently of each other, to the two rear transfer wheels. Thanks to the Variomatic switches fast and precise with the accelerator.

The pony could not meet the high expectations and was stopped because of the disappointing sales figures. 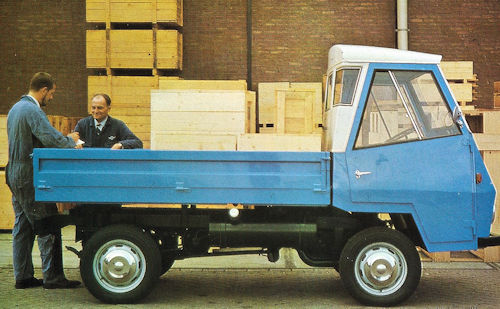