It was designed by Lotus founder Colin Chapman and has been considered the embodiment of the Lotus philosophy of performance through low weight and simplicity. The original model was highly successful with more than 2,500 cars sold,due to its attraction as a road legal car that could be used for clubman racing.

After Lotus ended production of the Seven, Caterham bought the rights and today Caterham make both kits and fully assembled cars based on the original design.

The Lotus Seven was launched in 1957, after the Lotus Eleven was in limited production. The Seven name was left over from a model that was abandoned by Lotus, which would have been a Riley-engined single-seater that Lotus intended to enter into the Formula Two in 1952 or 1953. However, the car was completed around Chapman's chassis as a sports car by its backers and christened the Clairmonte Special.

The Lotus Seven Series 2 (S2) followed in 1960, and the Series 3 (S3) in 1968. In 1970, Lotus radically changed the shape of the car to create the slightly more conventional sized Series 4 (S4), with a squarer fibreglass shell replacing most of the aluminium bodywork. It also offered some "luxuries" as standard, such as an internal heater matrix. What is believed to be the oldest of these Series 4s survives to this day, and can be seen most weekends around Sussex and Kent. The S4 brings a familiar face to Lotus events up and down the country; this was the second Series 4 ever built. It has proved critics of the S4 wrong; its looks have aged better than many predicted, and its performance and reliability are unsurpassed by any of the original Sevens.

The British tax system of the time (Purchase Tax) meant the car could be supplied as a kit (known as "completely knocked down" or CKD) without attracting the tax surcharge that would apply if sold in assembled form. Tax rules specified assembly instructions could not be included, but as the rules said nothing about the inclusion of disassembly instructions, they were included instead and all the enthusiast had to do was to follow them in reverse.

Having joined the EEC on 1 January 1973, the UK had to abolish Purchase Tax and adopt VAT instead. VAT does not allow for concessions such as "CKD", so the tax advantage of the kit-built Lotus Seven came to an end.

In 1973, Lotus decided to shed fully its "British tax system"-inspired kit car image and concentrate on limited series motor racing cars. As part of this plan, it sold the rights to the Seven to its only remaining agents Caterham Cars in England and Steel Brothers Limited in New Zealand. Caterham ran out of the Lotus Series 4 kits in the early 70s. When this occurred and in accordance with their agreement with Lotus, Caterham introduced its own brand version of the Series 3. They have been manufacturing and refining this car ever since as the Caterham Seven.

Steel Brothers Limited in Christchurch, New Zealand assembled Lotus Seven Series 4s until March 1979 when the last of the 95 kits provided by Lotus was used up. The last Lotus badged Seven Series 4 was therefore produced in New Zealand and as at 2011 was owned by Maurice Andrews. There was also an attempt to make a wider, modernized version of the Series 4 using the twin cam Lotus 907 engine, called the "Lotus Super 907". In the spring of 1978 it was announced that this was to be sold in the United States (as the 907 engine had been federalized) - but the American importer had no funds and the project came to naught. The single finished Super 907 still resides in New Zealand.

Between 1970 and 1975, following a representation agreement, Lotus Argentina SA obtained the license to manufacture the Lotus Seven in Argentina. This production reached approximately 51 units.

These vehicles were not replicas, but built under license and original brand Lotus, this being the only legitimate Lotus Seven built out of England, and therefore can legitimately bear the emblem of Lotus.

Analysis of the Seven's performance

A Seven's top speed greatly depends upon the body configuration, engine power and gearing. Early models with low-powered engines had difficulty exceeding 90 mph (140 km/h), although a race-prepared Seven was clocked at 127 mph (204 km/h) by Brausch Niemann through a speed-trap at the 1962 Natal Grand Prix. In addition, clamshell style wings tend to create drag and generate lift at higher speeds. Cycle guards help alleviate this tendency, and low height Brookland aeroscreens that replace the windscreen help improve top end speed. Sevens do suffer from front end lift at high speed, ther nose creates more lift than downforce at speeds over around 70 mph (110 km/h), although retro fitted 'winglets' may counter this lift.

Nearly all Sevens, due to their extremely light weight (around 10cwt / 500 kg) have excellent acceleration, especially up to 70 mph (110 km/h), depending on power. For their time, the original late 1950s Sevens could beat most contemporary saloon cars—and by the early 1960s, with improved Ford-Cosworth engines could take on most high performance sports cars with 0–60 mph time in the low 7 seconds.

The choice of brakes vary considerably between models and over the evolution of the car. The less powerful early models had drum brakes all round, while more powerful and later models had drums at the rear only (especially on live axle cars from the early 1960s) or discs all round. With the popularity of semi-independent (DeDion) or fully independent Rear suspension most manufacturers have opted for discs all round, as is current common practice in the automotive industry.

Physics favours small cars in braking and Sevens have excellent stopping distances, but one of the effects of light weight and powerful (non ABS) brakes is the tendency to lock up, especially at the front under strong braking. The cooling surface-to-weight ratio improves with reduced scale, while the light weight makes vacuum assistance unnecessary.

The highest part of the car is about three feet from the road and it has a cloth top and side curtains with plastic back and side windows. The supports for the top and the windshield frame are aluminium. The lower chassis tubes are five inches (127 mm) from the road, while the wet sump, bell housing and one chassis tube are lower, meaning the centre of gravity is very low.

The front/rear weight distribution is nearly equal and the lack of a boot and small petrol tank assure that it remains fairly constant. It is, however, more front-heavy than more modern high performance cars.

In the original Seven, the front lower A-arm (or "wishbone") of the double wishbone suspension is traditional, but for the purpose of reducing weight, the upper suspension integrated an anti-roll (anti-sway) bar into a horizontal suspension arm. This approach formed a pseudo-wishbone which was semi-independent in nature. This approach worked well with early crossply tyres, but with later radials, the configuration seriously affected its adjustability.

For the rear suspension, Lotus originally used a live axle (or solid axle). This approach was very cost effective since most production saloon cars up to the 1980s used these components. A mixture of Ford and Austin (Rover) components were used. The disadvantage of live axles is higher unsprung weight since the springs (and shock absorber) have to carry the weight of the axle and differential, affecting handling and ride on rough surfaces.

In general, cars with non-optimized aerodynamics tend to be free of adverse aerodynamic effects on handling, but the front wheel arches, of all but the Series I, cause lift at high speeds. Like the good straight line performance, the car's nimble handling is limited in speed range. It can be argued that this is not usually important in a car intended for public roads.

While the car's frontal area is small, the Lotus Seven has the highest drag coefficient of any known production car—ranging from 0.65 to 0.75, depending on bodywork. The introduction of the Series IV Seven improved the car's Cd.

The rack and pinion steering provides a minimum of play and friction. The light weight assures light steering without power assistance, even with very large tyres. The ratio is quick.

Rigidity of the frame

Like racing cars of the time and the equally respected and more expensive Mercedes-Benz 300SL coupe, it had a multi-tube space frame with high sides to allow a stiffer frame (longer lever arm). However, the Series II and other road versions had simpler frames than the more race oriented Series I.

It is a stressed skin  construction, in which the flat aluminium body panels, and especially the floor, triangulate the largely rectangular steel tubular frame structure. This gives a rigid frame with few tubes and very little body weight that does not contribute to the frame stiffness. The flat panels avoid difficulties in shaping aluminum sheet into smooth compound curves. On the down side, it does not allow "sexy" curves or streamlining.

The Lotus Seven was designed with racing in mind, and lightness was of primary concern to Chapman. A front mounted engine driving the rear wheels (a similar layout to most cars of the day) and a very lightweight steel spaceframe was covered with unstressed aluminium panel bodywork. The body panels were mainly flat to avoid the expense of more elaborate curved bodywork, and the simple cloth lined plastic doors were hinged from the windscreen. The nose-cone and wheel arches were originally aluminium parts, but these were replaced in the later S2 and S3 models with painted or self-coloured fibreglass.

Early Lotus Sevens weighed around 1,100 lb (10cwt/500 kg). Although the weight crept upward as production progressed, it remained remarkably low for a production car of over a litre displacement.

The front was by "A" arms and coil springs with an anti-roll bar serving as the front half of the top A arm. The rear had trailing arms, a triangular centre locating member and solid rear axle.

The geometry and high (relative to total) unsprung weight gave it some bump steer, which owners sometimes treated by moving the supports forward and lengthening the trailing arms.

A model that was sold in the US had independent rear suspension and a Coventry Climax engine.

The series II had problems with its Standard Companion estate car (station wagon) rear axle and differential. This was later solved on the Series III with a Ford Cortina rear end.

The tubular spaceframe chassis suffered from rust, especially from the inside which would lead to its sudden and unexpected collapse.

Lotus Seven in the media 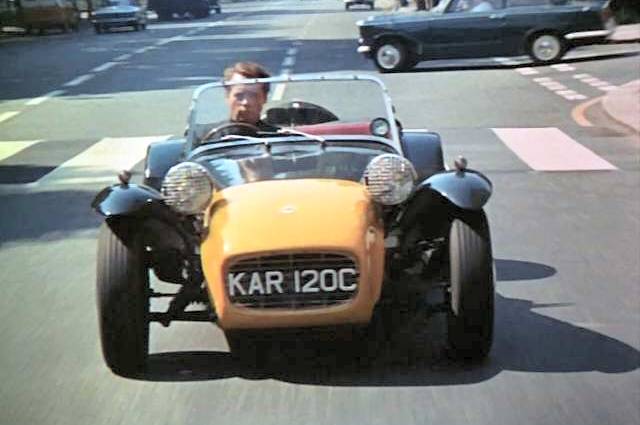 S2 Lotus Seven (registration KAR 120C), driven by star Patrick McGoohan, was featured in the opening titles of the 1967–1968 television series The Prisoner. The registration plate is still held by Caterham Cars.. The car in the final episode, "Fall Out", was actually a Series 3. This car required special handling, and the actor who was originally hired to drive the car to Number 6's home (In Buckingham Place, London) couldn't handle it. The Chief Engineer of Lotus (who ended up as the head of the company who took the Lotus 7 on when Lotus decided to get rid of it) took the actor's place, and it is he who is seen delivering the car to Number 6's doorstep.