The Lotus-Ford Twin Cam is a 1557 cc engine developed for the 1962 Lotus Elan and also used in a variety of other vehicles up until the mid 1970s.

Lotus required a low cost, compact, yet powerful engine for the Elan, as the custom-built all-aluminium Coventry Climax FWE for Elite was very costly.

Colin Chapman initially chose to use the overhead valve (OHV) cast iron block 997 cc (60.8 cu in) Ford 105E inline four used in the Ford Anglia as the basis of this new engine. While the basic engine design was oriented toward performance (being of oversquare design with indivisual intake and exhaust ports that are not siamesed), 105E was by no means a performance engine. Soon the 1,339 cc (81.7 cu in) 109E for Ford Consul Classic became available, and most of the development was carried out on this three bearing 109E block.

To achieve the power required, Chapman commissioned Harry Mundy (of BRM V16 fame) to design a dual overhead camshaft (DOHC) conversion. This comprised an aluminium cylinder head and an aluminium front cover and its back plate assembly containing the water pump and the camshaft drive chain. However, the 5 main bearing 1,498 cc (91.4 cu in) version for Consul Capri became available in time for production, and the design was converted on this 116E block, crankshaft and 125E Type C conrods.

After the initial design was finished, Richard Ansdale, as an outside consultant, provided the detail design and drew the plans needed for production. Steve Sanville, a Lotus employee, headed the production engineering team including Mike Costin, Neil Francis and Bob Dance, which incorporated the port shape modifications suggested by Harry Weslake, who conducted a flow bench analysis on the head. Keith Duckworth had already left Lotus, but was responsible for Special Equipment cam design, as well as the assembly of the first two production-specification engines, one of which powered Lotus 23 on its sensational debut at Nürburgring.

Likely reflecting Chapman's obsession (as an engineer, he was known to go to the extreme in lightweight designs) to save weight by using one mechanical part for as many purposes as possible, the water pump used the engine front cover as its housing, making water pump replacement difficult. The intake manifold was cast as an integral part of the cylinder head, making the later heads using Stromberg carburetors not interchangeable with those for Weber or Dell'Orto carburetors. These designs were unique then, and very few have followed suit.

Also notable is that the original camshaft was retained as an intermediate shaft driving the DOHC cam sprockets via a front-mounted, single – long – timing chain, having the side-mounted distributor and nearby external oil pump/filter assembly in original locations, requiring few modifications to the mass-produced iron block.

After the initial 50 engines were contracted out and assembled by J.A.Prestwich, the specification was changed to a larger 3-1/4" (82.5500 mm) bore, increasing the capacity to 1,557 cc (95.0 cu in). Only 22 of the 1.5 Litre engines made their way into roadgoing "Elan 1500", the rest being used on Lotus 20B, 22, 23, 26R as well as in Elan and Lotus Cortina prototypes and a LHD Ford Anglia mule, which, fit with one of the first prototype engines, had overtaken a fast Jaguar at well over 100 mph in the hands of Jim Clark on his way back from Goodwood to Scotland. The 1,557 cc (95.0 cu in) displacement of the new specification allowed an overbore of 0.040 in (1.0 mm) as permitted by the FIA regulations, while keeping the cubic capacity below the new FIA 1600 cc class limit.

Chapman named the engine "Lotus TwinCam" at its introduction in 1962. However, coinciding with the production switch-over from Cortina-Lotus to the Cortina Twin Cam based on the Ford Cortina Mark II, Ford acquired the rights to the design, and the name was changed to "Lotus-Ford Twin Cam" in 1967.

The cylinder head has hemispherical combustion chambers similar to that first used by Peugeot on their 1912 Grand Prix car and subsequently refined by Vittorio Jano in the 1920s and 1930s, as well as by Walter Hassan in the 1940s and 1950s, among other notable engineers who continually borrowed ideas from the aeronautics industry. Valve sizes used are 1.530" diameter inlet and 1.325" diameter exhaust on all engines except the "big valve" Elan Sprint and Lotus Europa models which have an inlet valve measuring 1.565" diameter, with the valve stem axis inclined 27 degrees from vertical on both intake and exhaust.

The 116E block was used in 5 basic versions

By 1966 all major engine parts – block, crank, rods, pistons and flywheel were unique to the Lotus engine. By the end of production, some 55,000 units had been built. 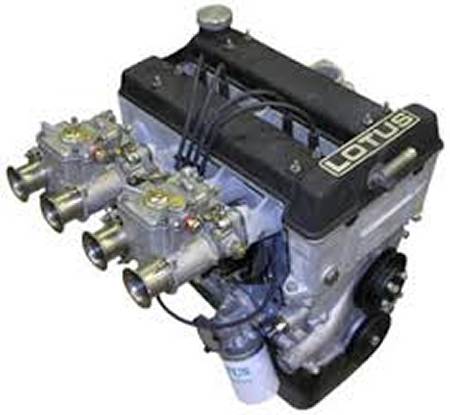 In order to accommodate Elan and Lotus Cortina customers who wanted a higher performance engine, Lotus sold cars with optional Special Equipment engines, and Lotus Components Ltd sold the parts used in these engines. At first, these were Cosworth developed and assembled engines with cast cranks and Cosworth name plates on the cam cover. However, Cosworth soon distanced themselves from this business, and Lotus started selling 'BRM' equivalents. BRM Phase I consisted of BRM camshafts and high compression cast pistons, and BRM Phase II added Mahle forged pistons, BRM forged conrods, small-end bushes and big-end bolts to the Phase I. When offered in assembled form, these engines carried a BRM name plate on a specially cast 'BRM' cam cover, but the actual assembly of these high performance 'BRM' road engines was carried out by Rubery Owen & Co. Ltd., an affiliated company of BRM through its ownership, not by BRM itself.

The term "Special Equipment" was later converted by Lotus to designate those Series 2 and later Elans with higher output motors, which are referred to as Elan SEs.

The Mk.XII was further developed by using Cosworth 12 bolt forged steel crankshaft, Cosworth forged conrods, wilder camshafts and Weber 45DCOE for Formula racing to become the Cosworth Mk.XIII (83.50mm x 72.75mm, 1594 cc, 140-150 bhp). This Mk.XIII became a big seller in 1965 when the SCCA created Formula B category in America. As a result, not only did SCCA Formula B practically become a Cosworth-engine class (inherited later by Cosworth BDD when it became Formula Atlantic), helping Cosworth establish its corporate financial base, but ironically this enabled the now-viable engineering firm to move from near-total dependence on Lotus. The proliferation of the Mk.XIII triggered establishment of new European style racing engine builders in the US, performing rebuilding and maintenance work needed on the Mk.XIII, who also contributed to Cosworth's revenue.

Although it still used the Ford iron block, Mk.XIII was a properly developed racing engine that was far from just another souped-up production motor, and its dominance in Formula B was close to being absolute against the main rivals Satta/Hruska designed Alfa Romeo 105/115 1570 cc DOHC unit, and Alex von Falkenhausen designed SOHC 1573 cc BMW M116 engine.

Cosworth designed its own aluminium reverse-flow 2 valve gear-driven SOHC cylinder head (which shared many basic design attributes with Coventry Climax FWE head) for the same Ford 116E block with a shorter-stroke forged steel crank for 1 Liter Formula 2 to be named SCA (997 cc, 120-140 bhp) in 1964, and then a gear-driven DOHC 4 valve cross-flow aluminium head on the same block with the Mk.XIII forged crank for the new 1.6 Liter Formula 2 named FVA (83.60mm x 72.75mm, 1597 cc, 210-220 bhp) in 1966. This is when the development on Lotus TwinCam ended on the part of Cosworth.

When the customers wanted to race the TwinCam seriously, they turned to Holbay, Vegantune, Novamotor and other engine builders, who carried on the development after 1966 not only for Elan and Cortina, but also for Formula 2, 3 and other categories, which were served later by Brian Hart, Richardson, Wilcox and other newer tuners as well.

The Lotus TwinCam is an enduring engine and even to this day is still used in rallying, hillclimbing, autocross and of course, historic motorsport events. In fact, some may argue that the "twink" is more popular in motorsport now than it was during its production. This, in no small part, is due to the likes of companies such as QED Motorsport or Burton Power who strive to keep the engine in service with hard or impossible to find engine components. QED bought the license to officially re-produce the Twin Cam's cylinder head.

It is not unusual to see 170-180 bhp from a properly built "Lotus TwinCam" on a dyno for Historic Formula races these days (2013) with the advancements in ignition, air/fuel measurement, metallurgy, lubricants and computer-aided manufacturing/development tools, however, it is very little known that this dry-sump steel-crank racing engine is more accurately called Cosworth than Lotus.