The Jensen Interceptor remained in production for 11 years. During this time, around 7,200 vehicles were built in three series. During the production period, the company experienced considerable economic turbulence, which was mainly triggered by the cancellation of the production order for the Austin Healey without replacement. At the beginning of the 1970s there was a change of ownership; Jensen was taken over by US entrepreneur Kjelle Qvale, who continued Interceptor production without initiating the development of a successor. As a result of the first oil crisis, the company went bankrupt in 1975, after which Jensen stopped producing cars. A successor company called Jensen Parts and Service took over the supply of spare parts and service for existing vehicles and also manufactured some new vehicles in the late 1980s.

The body of the Interceptor was made of steel. The Interceptor was created in three body versions. The basic and by far the most produced version was a closed two-door hatchback known as a saloon, whose outstanding design feature was a large panoramic rear window that also served as a tailgate. In the English-speaking world it is often referred to as a "goldfish bowl". From this model, a two-door convertible and finally a two-door notchback coupé was derived in 1974.

The saloon was created in three series, which differed from each other technically and visually; The cabriolet and coupé were manufactured exclusively in the configuration of the third series. Standard features include reclining backrests, electrically-controlled windows, electrically- heated rear window; air-conditioning and even a warning light for worn brakes.

For the Interceptor, Jensen took over the tube frame chassis from its predecessor, which was largely designed by Kevin Beattie, as well as the basic features of the suspension. As there, the front wheels were individually suspended on double wishbones with coil springs, at the rear Jensen used a rigid axle with leaf springs and Panhard rod.

For the series III, Jensen switched to a 7.2 litre (440 cu in) eight-cylinder RB series. Comparable engines were also used by Jensen's competitors Bristol and Monteverdi. The fourth series of the Interceptor, which was manufactured in small numbers by a successor company from 1983, had a smaller eight-cylinder engine with a displacement of 5.9 litres.

The power was transmitted by an automatic three-speed gearbox from Chrysler (type Torque Flite). A fully synchronized manual four-speed gearbox was initially available for the first series saloons, but this was only ordered 23 times.

The first and by far the best-selling version of the Interceptor is the closed two-door until early 1974 it was the only version. In the eleven years of construction with the third series being subdivided again. Over the course of time, the series underwent numerous detailed changes that related to the drive technology as well as the body design and the interior.

The body largely corresponded to the Mk. 2; however, the car received standard alloy wheels and a modified interior. From November 1971, Jensen also replaced the 6.3-liter engine with an eight-cylinder engine with a displacement of 7.2 litres, which was still sourced from Chrysler. Right- hand drive vehicles continued to have the engine of the previous model until May 1972. The reason for the change was the reduced performance of the engines due to the American emissions laws. Increasingly strict laws required lower compression, resulting in a significant loss of power. To compensate for this, Jensen, like other Chrysler customers, was forced to use engines with larger displacements. However, even with the 7.2 litre engine, which delivered 285 hp (210 kW), the Mk. 3 was less sporty than the early Mk. 1 models, as the larger engines were heavier and limited the vehicles' manoeuvrability. 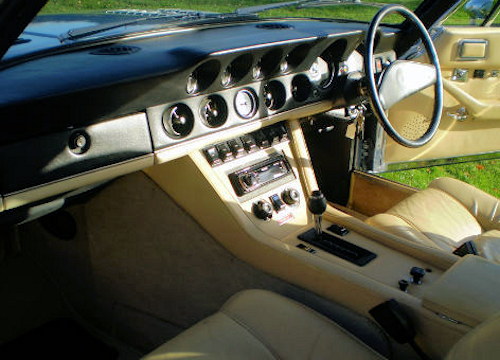 Jensen presented a convertible version of the Interceptor in 1974, especially with a view to the US sales market and the success of the Rolls-Royce Corniche Convertible there. The company worked against the trend. The general expectation in the automotive industry was that American safety regulations would prevent full convertibles from being approved in the foreseeable future. As a result, most American manufacturers phased out their convertible models by the mid-1970s.  In fact, such a regulation was never issued.

Technically, the Interceptor Convertible corresponded to the Saloon Mk. 3. The chassis of the Saloon was only reinforced in a few places - especially on the frame of the windshield and on the rear wheel arches; apart from that it remained unchanged. The fabric roof was opened and closed by means of a hydraulic system; the process only worked when the vehicle was stationary.

The cabriolet is considered particularly elegant and is one of the most sought-after, but also most expensive models of the brand. Unlike the saloon, the cabriolet, which was tailored to the American market, was mainly sold as a left-hand drive. When it was launched in 1974, the convertible cost £9,863. The Bristol 412, which was presented at the same time, reached a price level comparable to that of the Interceptor, although it was manufactured in significantly smaller quantities.

Only around 500 copies were made by 1976, most of which were sold to the USA market.

The rarest version of the Interceptor is the coupe, which was presented at the Earls Court Motor Show in London in October 1975, just before the company went bankrupt. Unlike the saloon, the coupé featured a notchback. It was based on the body-in-white of the Interceptor Convertible, but received a hardtop instead of the soft top. The hardtop was not manufactured by Jensen itself, but by the British small series manufacturer Panther Westwind’s.

From three different prototypes created by Panther, a hardtop was selected for series production, which was equipped with a window made of tinted polymethyl methacrylate (Plexiglas) behind the doors. The window stretched like a roll bar through the roof, which was otherwise covered with imitation leather. The rear window corresponded to that of the Jaguar XJ-C, the chrome "Coupé" lettering on the rear fenders were taken over by the Morris Marina. By the time production finally stopped in 1976, 46 according to other sources 47 or 54 vehicles had left the West Bromwich plant, of which around 40 still exist today.

The Jensen SP was introduced in 1971 as the successor to the FF. The designation SP stood for "Six Pack" referring to the carburettor combination. Externally and technically, the SP fully corresponded to the Interceptor Mk. 3. The main difference was a significantly more powerful engine. For the SP, Jensen used a 7.2-litre eight-cylinder engine fitted with three twin Holley carburettors. The power was given as 385 hp (gross) or 330 hp (net), the maximum torque was 556 Nm and was generated at 3,600 rpm.

The car was powerful but had a very high consumption, which averaged 28 or 35 litres per 100 km, depending on the source. In addition, the car required a lot of maintenance; the carburettors had to be adjusted on average once a month (or every 500 km). The very expensive SP could not be exported to the United States because it did not meet American emissions legislation, so it was primarily reserved for the British market. By 1973, 232 copies were built, most of which had right-hand drive. 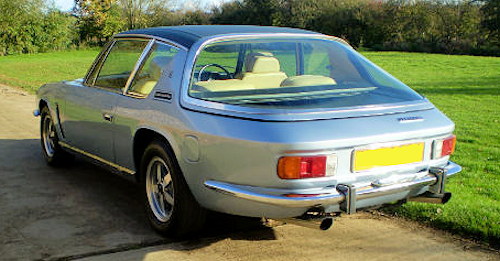 A total of 6640 units were manufactured, taking into account pre-series vehicles as well as SP-type vehicles. 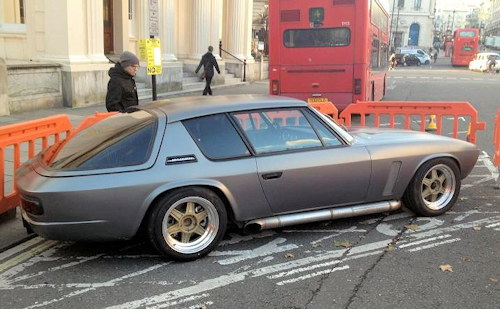