Jensen Motors Ltd was a British manufacturer of sports cars and commercial vehicles, based in the Lyng – West Bromwich (in the West Midlands, west of Birmingham). The Jensen brothers(Alan and Richard, born in Moseley, Birmingham were previously employed in the bodyshop of Patrick Motors, Selly Oak, Birmingham in a building which is still standing next to the University of Birmingham campus. The company was established in 1934 and ceased trading in 1976. The rights to Jensen were bought and the company operated in Speke, Merseyside from 1998 to 2002. Under further new owners, a new version of the Jensen Interceptor was announced in 2011 as bringing manufacturing back to the former Jaguar motor plant in Browns Lane, Coventry.

Jensen began as a small coachbuilding firm run by brothers Richard and Alan Jensen; they bought out the body works of W.J. Smiths & Sons where they worked after the owner's death and renamed it Jensen Motors in 1934. They built exclusive customised bodies for standard cars produced by several manufacturers of the day including Morris, Singer, Standard, and Wolseley. In 1934 they were commissioned by American film actor Clark Gable to design and build a car for him based on a Ford V-8 chassis.The resultant car won them much acclaim and stimulated huge interest in their work including a deal with Ford to produce a run of Jensen-Fords with Jensen bodywork with a Ford chassis and engine. In 1934 they also started to design their first true production car under the name White Lady. This evolved into the Jensen S-type which went into production in 1935.

In the late 1930s Jensen diversified into the production of commercial vehicles under the marque JNSN, including the manufacture of a series of innovotive lightweight trucks, built with aluminium alloys, for the Reynolds Tube Company and the prototype for the articulated Jen-Tug which went into production in the late 1940s.

During World War II Jensen concentrated on the war effort and produced components for military vehicles including the turrets for tanks, and on the production of specialised ambulances and fire-engines.

After the war production of the Jen-Tug thrived and Jensen also produced a new range of JNSN lightweight diesel trucks and chassis which were used for a variety of vehicles including pantechnicons and buses. A handful of Jensen buses and coaches were produced for independent operators into the 1950s, with Perkins diesel engines, David Brown gearboxes, and bodywork by a variety of bodybuilders of the time, which had the distinctive large JNSN marque cut into the sheet metal on the front of the bus, below the windscreen. In the 1950s Jensen were chosen by the British Motor Corporation (BMC) to build the bodies for the four-wheel-drive Austin Gipsy. In 1958 they built a small number of Tempo minibuses, a German original design, under licence.

Production of cars ceased during the war years, but by 1946 a new vehicle was offered, the Jensen PW (a luxury saloon). Few were produced since raw materials were still in short supply. Also in 1946 body designer Eric Neale joined the company from Wolseley and his first project was the more modern coupe which followed in 1950, named the Interceptor, which was built until 1957. In 1955, Jensen started production of Neale's masterpiece, the 541, which used the then-revolutionary material of fiberglass for its bodywork. The 541 was replaced by another Neale design, the CV8 in 1962, which replaced the Austin-sourced straight-6 of the previous cars with a 6 litre American Chrysler V8. This large engine in such a lightweight car made the Jensen one of the fastest four-seaters of the time.

For its replacement, the Interceptor (launched in 1966), Jensen turned to the Italian coachbuilder, Carrozzeria Touring, for the body design, and to steel for the material. The bodyshells themselves were built by Vignale of Italy and later by Jensen. The same 383 cu in (6.3 L) Chrysler wedge-head powerplant was used in the earlier cars with the later cars moving to the 440 cu in (7.2 L) in engine. The Interceptor was offered in fastback, convertible and (rare) coupé versions. The fastback was by far the most popular with its large, curving wrap-around rear window that doubled as a tailgate.

Related to the Interceptor was another car, the Jensen FF, the letters standing for Ferguson Formula, Ferguson Research being the inventor of the full-time all wheel drive system adopted, the first on a production sports car. Also featured was the Dunlop Maxaret anti-lock braking system in one of the first uses of ABS in a production car. Outwardly, the only differences from the Interceptor were four extra inches of length (all ahead of the windscreen) and a second row of air vents behind the front wheels. The small number of 320 FFs were constructed, and production ceased in 1971.

Austin A40 Sports: As one in a series of collaborations between Austin and Jensen, the Austin A40 Sports originated when Austin's chairman Leonard Lord, upon seeing the Interceptor, requested that Jensen develop a body that could use the A40 mechanicals. The resulting body-on-frame A40 Sports – which debuted at the 1949 London Motor Show – had been designed by Eric Neale, an ex-Wolseley stylist who had joined Jensen in 1946.During production, the A40 Sports' aluminium bodies were built by Jensen and transported to Austin's Longbridge plant for final assembly. The A40 Sports had been intended as more of a sporty touring car and not a sports car per se, and over 4000 examples were manufactured from 1951–1953.

Austin-Healey 100: Although Jensen's design for a new Austin-based sports-car was rejected by the British Motor Corporation (BMC) in 1952 in favour of a design provided by Donald Healey, Jensen did win the BMC contract to build the bodies for the resultant Austin-Healey 100 from 1952 until 1956.

Volvo P1800: In 1960 Jensen won a contract from Volvo to assemble and finish the bodies for their P1800 coupé. Pressed Steel manufactured the body-shells at their Linwood plant in Scotland and shipped them to Jensen in West Bromwich to be finished, painted and trimmed, before then being shipped to Sweden where Volvo completed the final build.

Sunbeam Tiger: In the early 1960s Jensen were also involved in the development and production of the Sunbeam Tiger.

The company had come under the control of the Norcros Group in 1959 and following disagreements Alan and Richard Jensen resigned in 1966. The American car distributor Kjell Qvale became the majority shareholder in 1970 and brought in Donald Healey as chairman.

By 1975, the company's future was under threat, with the redundancy of 700 workers - two thirds of its workforce.

Jensen Motors ceased trading in May 1976. Two new companies: Jensen Special Products (JSP) and Jensen Parts & Service Limited (JP&S) were created to pick up the pieces of Jensen Motors. JSP was created as a specialist engineering and design company from Jensen's development department. JP&S was created to provide parts and service to the existing Jensen customer base. Both JSP and JP&S were bought by a holding company, Britcar Holdings. In 1982 JP&S, with the rights to use the Jensen brand names, was sold to Ian Orford who put the Interceptor back into production as the Mk IV.

Jensen Parts and Service was renamed Jensen Cars Ltd and 11 cars were made before the company was sold to Unicorn Holdings of Stockport and a Mk V Interceptor was proposed but never materialised although a few more Mk IVs were built.

In April 2010 Jensen International Automotive (JIA) was founded. This new company will buy old Jensen Interceptors, and sell them as new ones after a complete restoration, with new engine and interior trim.

In September 2011 CPP, a specialist sports car manufacturer announced they were planning to make a new Jensen, expected to go on sale to the public sometime in 2014. The new Interceptor will be based around an all-aluminium chassis and will feature alloy panels, ‘echoing the four-seat grand tourer layout of the much-loved original’, according to the official press release. 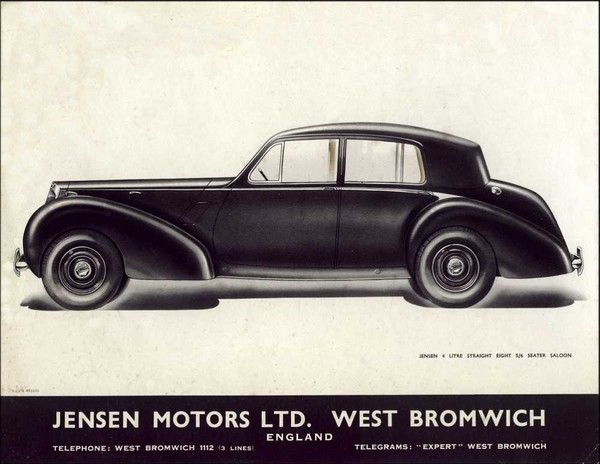