Automotive manufacturer of West Bromwich ,Great Britain from 1984 to 1993. 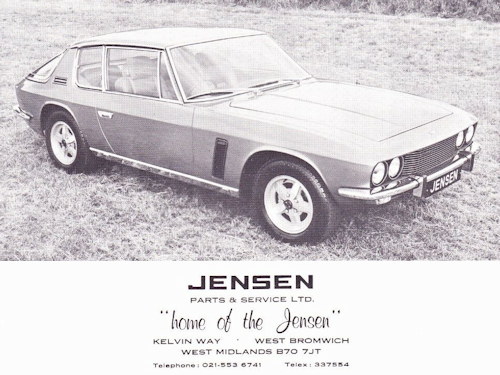 Jensen Parts and Service from 1988 as Jensen Cars  was a British car manufacturer , which produced from 1984 to 1993 in small numbers a high-priced Interceptor Mark IV, the successor of the company Jensen Motors , which had been dissolved in 1976 after a bankruptcy, and as such continued for a short time the production of Jensen Interceptor .

Founded in 1935 by Richard and Alan Jensen, West Bromwich- based Jensen Motors was primarily a body builder; After the Second World War, among other things, the superstructures for the Austin Healey and the Volvo P1800 . In addition Jensen produced since 1946 under his own name a number of expensive sports cars, which were located in the market segment of the upper class. The last model was the 1967 presented Jensen Interceptor, which was produced until 1976 in three series. In the early 1970s Jensen got into financial difficulties, which could be temporarily remedied by a financial commitment of the US Jensen importer Kjell Qvale . The First oil crisis 1973/74 led as with other sports car manufacturers also to a substantial decline in sales, as a result of which Jensen became insolvent in 1976. The company was liquidated and the production of the Interceptor ended.

In the course of the liquidation of Jensen Motors, the previous spare parts department was removed from the company and became independent under the name Jensen Parts and Service (JP & S). JP & S was initially a subsidiary of Britcar Holdings, which belonged to Kjell Qvale. It was led by Ian Orford and was responsible for spare parts supply, repair and restoration of previous Jensen models. Already in the late 1970s, several customers ordered all the items that were needed to build a new Interceptor. Orford was then of the opinion that there was still a market for new vehicles Jensen. In 1982, Orford Jensen Parts & Services took over and prepared to resume series production of the Interceptor.

From 1984, the car was available under the name Jensen Interceptor Mark IV ( Series 4). Externally, it corresponded largely to the 1976 produced Interceptor Mark III, technically it was, however - especially in the engine - revised. The Saloon and Cabriolet, very expensive models competed with the vehicles of Aston Martin and Bristol . They achieved only a very small amount of production.

In 1988, Ian Orford sold the company to a British investor who changed the company to Jensen Cars. Orford initially remained in the company, but retired after his position had been reduced to the rank of production manager, after a short time completely back. At the end of the 1980s, consideration was given to offering a significantly revised Interceptor Mark V; however, they were not realized. In 1993 Jensen Cars was liquidated after the inability to pay.

From 1984 to 1992, only 14 copies of the Interceptor Mark IV were created, including 8 convertibles, 5 saloons and 1 hardtop coupe, another convertible was never completed.  In addition to newly-built vehicles and customer vehicles but have been restored and z. B. upgraded with new components (injection systems, electric mirrors).

The Interceptor Mark IV was an evolution of the Mark III manufactured until 1976. JP & S claimed that more than 1000 detail changes had been made to the Mark IV.

The body was taken over largely unchanged. As with its predecessor, was a saloon called closed two-door with large glazed tailgate and a convertible available. As a single copy in 1987, a notchback coupe with the name Fixed Head Coupe wasproduced, which followed the 1975 presented and built by 1976 in about 50 copies coupe. The only stylistic independence was a discreet spoiler under the front bumper. In the interior, electrically adjustable seats were installed by Recaro . Details such as fittings, switch positions and color design could be individually determined by the customer.

The most significant technical change was the installation of a smaller engine. Instead of the used in the Mark III 7.2-liter eight-cylinder from Chrysler Jensen put the Mark IV a small-block - Achszylinder of the same manufacturer with 5.9 liters of displacement. The engine belonged to the LA family introduced in 1964 and was at the beginning of the 1970s, a standard engine for the middle-class models of the Chrysler Group. In the 1980s Bristol used the engine still for the models Britannia , Brigand and Beaufighter . Unlike Bristol, however, Jensen did not use a carburettor version of the engine but used gasoline injection and electronic engine management. In this form, the engine met all US emissions regulations. The power was 280 hp  approximately at the level of the previous 7.2-liter models.  concerned more technical modifications to the blower from Bosch was obtained, and the disc brakes , which were now vented.

The Interceptor Mark IV had a type approval in the UK and in the US. Because of the constructive proximity of the car to the Mark III, the British and American authorities renounced renewed crash tests. For a type approval in Europe such a test would have been required. For financial reasons, Jensen renounced it, so that in continental Europe for each Mark IV model, an individual approval was necessary.

The first Mark IV was presented at the end of 1983 at the Birmingham Motor Fair, another presentation took place at the London Earls Court Motor Show in 1984. The selling price at that time was given as £ 40,000. Thus, the Jensens were slightly above the Bristol models positioned.

From 1986, the company developed a revised Interceptor model called Mark V, whose series production was scheduled for 1992. As a drive, the technicians foreseen a 5.7-liter eight-cylinder engine from General Motors , which should correspond to the engine used in the Chevrolet Corvette . Instead of the tubular frame, the car used a space frame , which should be lighter but similar torsion-resistant as the previous design. Stylistically, the distinctive rear end was retained, but the front end was redesigned. In 1988, a prototype, which was never equipped with the Chevrolet engine. The new owner of the company kept the prototype under wraps.

The production was limited to a few copies. By the end of 1987, eleven vehicles had been manufactured.