The Series 1 was introduced, initially for export only, in March 1961. The domestic market launch came four months later in July 1961. The cars at this time used the triple SU carburetted 3.8 litre six-cylinder Jaguar XK6 engine from the XK150S. Earlier built cars utilised external bonnet latches which required a tool to open and had a flat floor design. These cars are rare and more valuable. After that, the floors were dished to provide more leg room and the twin hood latches moved to inside the car. The 3.8-litre engine was increased to 4.2 litres in October 1964.

All E-Types featured independent coil spring rear suspension with torsion bar front ends, and four wheel disc brakes, in-board at the rear, all were power-assisted. Jaguar was one of the first vehicle manufacturers to equip cars with disc brakes as standard from the XK150 in 1958. The Series 1 can be recognised by glass-covered headlights (up to 1967), small "mouth" opening at the front, signal lights and tail-lights above bumpers and exhaust tips under the number plate in the rear.

A 2+2 version of the coupé was added in 1966. The 2+2 offered the option of an automatic transmission. The body is 9 in (229 mm) longer and the roof angles are different. The roadster remained a strict two-seater.

Less widely known, right at the end of Series 1 production and prior to the transitional "Series 1½" referred to below, a very small number of Series 1 cars were produced with open headlights. Production dates on these machines vary but in right hand drive form production has been verified as late as March 1968. The low number of these cars produced make them amongst the rarest of all production E Types.

Following the Series 1 there was a transitional series of cars built in 1967–1968, unofficially called "Series 1½", which are externally similar to Series 1 cars. Due to American pressure the new features were open headlights, different switches, and some de-tuning (using two Zenith-Stromberg carburetters instead of the original three SUs) for US models. Some Series 1½ cars also have twin cooling fans and adjustable seat backs. Series 2 features were gradually introduced into the Series 1, creating the unofficial Series 1½ cars, but always with the Series 1 body style. A United States federal safety law affecting 1968 model year cars sold in the U.S. was the reason for the lack of headlight covers and change in switch design in the "Series 1.5" of 1968. An often overlooked change, one that is often "modified back" to the older style, is the wheel knock-off "nut." U.S. safety law for 1968 models also forbid the winged-spinner knockoff, and any 1968 model year sold in the U.S. should have a hexagonal knockoff nut, to be hammered on and off with the assistance of a special "socket" included with the car from the factory. This hexagonal nut carried on into the later Series 2 and 3.

The cars submitted for road test by the popular motoring journals of the time (1961)such as The Motor, The Autocar and Autosport magazines were specially prepared by the Jaguar works to give better-than-standard performance figures. This work entailed engine balancing and subtle work such as gas-flowing the cylinder heads and may even have involved fitting larger diameter inlet valves.

Both of the well-known 1961 road test cars: the E-type Coupe Reg. No. 9600 HP and E-type Convertible Reg.No. 77 RW, were fitted with Dunlop Racing Tyres on test, which had a larger rolling diameter and lower drag co-efficient. This goes some way to explaining the 150 mph (240 km/h) maximum speeds that were obtained under ideal test conditions. The maximum safe rev limit for standard 6-cylinder 3.8-litre E-type engines is 5,500 rpm. 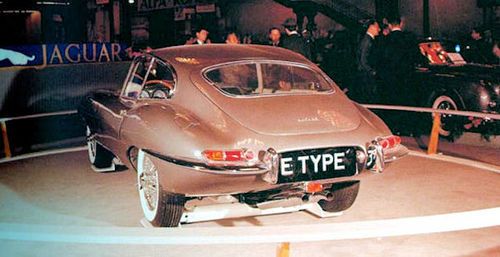 After the company's success at the Le Mans 24 hr through the 1950s, Jaguar's defunct racing department was given the brief to use D-Type style construction to build a road-going sports car, replacing the XK150.

The first prototype (E1A) featured a monocoque design, Jaguar's fully independent rear suspension and the well proved "XK" engine. The car was used solely for factory testing and was never formally released to the public. The car was eventually scrapped by the factory.

Jaguar's second E-Type concept was E2A which, unlike the E1A, was constructed from a steel chassis with an aluminium body. This car was completed as a racing car as it was thought by Jaguar at the time it would provide a better testing ground. E2A used a 3-litre version of the XK engine with a Lucas fuel injection system.

After retiring from the Le Mans 24 hr the car was shipped to America to be used for racing by Jaguar privateer Briggs Cunningham. In 1961, the car returned to Jaguar in England to be used as a test vehicle. Ownership of E2A passed to Roger Woodley (Jaguar's customer competition car manager) who took possession on the basis the car not be used for racing. E2A had been scheduled to be scrapped. Roger's wife Penny Griffiths owned E2A until 2008 when it was offered for sale at Bonham's Quail Auction. It eventually soldfor US$4,957,000.

Two limited production E-Type variants were made as test beds, the Low Drag Coupe and Lightweight E-Type, both of which were raced:

Shortly after the introduction of the E-Type, Jaguar management wanted to investigate the possibility of building a car more in the spirit of the D-Type racer from which elements of the E-Type's styling and design were derived. One car was built to test the concept designed as a coupé as its monocoque design could only be made rigid enough for racing by using the "stressed skin" principle. Previous Jaguar racers were built as open-top cars, because they were based on ladder frame designs with independent chassis and bodies. Unlike the steel production E-Types, the LDC used lightweight aluminium. Malcolm Sayer retained the original tub with lighter outer panels riveted and glued to it. The front steel sub frame remained intact, the windshield was given a more pronounced slope, and the rear hatch was welded shut. Rear brake cooling ducts appeared next to the rear windows, and the interior trim was discarded, with only insulation around the transmission tunnel. With the exception of the windscreen, all cockpit glass was perspex. A tuned version of Jaguar's 3.8-litre engine with a wide-angle cylinder head design tested on the D-Type racers was used. Air management became a problem and, though a higher performing vehicle than its production counterpart, the car was never competitive.

The only test bed car was completed in summer of 1962 but was sold a year later to Jaguar racing driver Dick Protheroe. Since then it has passed through the hands of several collectors on both sides of the Atlantic and is now believed to reside in the private collection of the current Viscount Cowdray.

Twelve cars plus two spare bodies were made by Jaguar.

In some ways, this was an evolution of the Low Drag Coupé. It made extensive use of aluminium alloy in the body panels and other components. However, with at least one exception, it remained an open-top car in the spirit of the D-Type to which this car is a more direct successor than the production E-Type which is more of a GT than a sports car. The cars used an aluminium block tuned version of the production 3.8-litre Jaguar engine with 300 bhp (224 kW) output rather than the 265 bhp (198 kW) produced by the "ordinary" version. All factory-built lightweights are fitted with Lucas Fuel Injection and a ZF 5 speed gearbox.

The cars were entered in various races but, unlike the C-Type and D-Type racing cars, they did not win at Le Mans or Sebring but were reasonably successful in private hands and in smaller races. 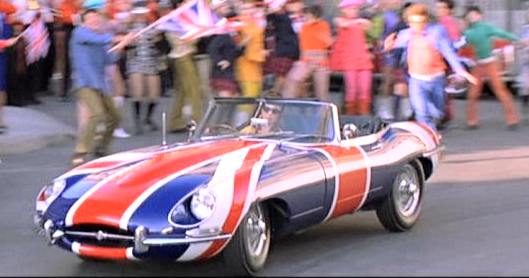 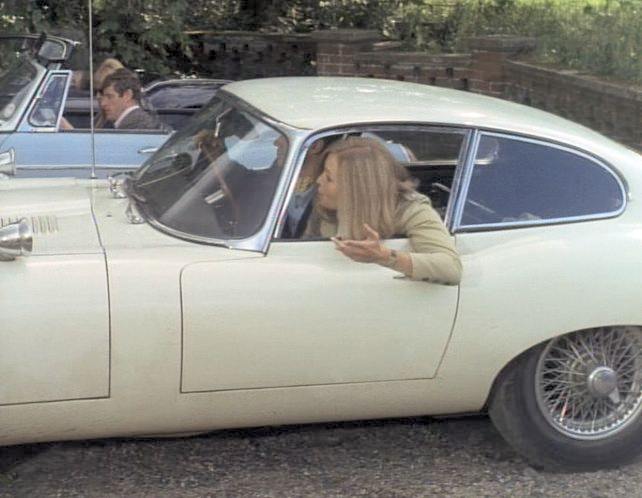