The Jaguar XK (project code X150) is the second generation of the Jaguar XK grand tourer from Jaguar Cars. The vehicle was unveiled in 2005 at the Frankfurt Motor Show with the first generation's 4.2-litre V8 engine. The XK convertible was unveiled in 2006 North American International Auto Show in Detroit. A facelifted XK was launched in 2009 with a new 5.0-litre V8.

The X150 design was completed in 2002 and was previewed by Advanced Lightweight Coupé (ALC) which was first seen at the 2005 North American International Auto Show. The designer, Ian Callum, was also responsible for the Aston Martin DB7 and Vanquish coupés. The new XK's grille is inspired by that of the 1961 Jaguar E-Type.

The XK received a facelift in 2009, with minor alterations to front and rear lighting and bumper designs, together with the introduction of a new 5.0-litre V8 for both the naturally aspirated XK and the supercharged XKR. The interior also received some changes, in particular the introduction of the XF style rotary gear selector mated to the new ZF automatic transmission. In 2010, Jaguar added the Speed Pack option, with aerodynamic bodykit and speed limiter increased to 174 mph (280 km/h), and the Black Pack, with black wheels and trim.

The XK received a second facelift in 2011 with new front bumper and light design, which was presented at the New York Auto Show.

The vehicle was unveiled in 2008 Geneva Motor Show and later 2008 Paris Motor Show. Production version went on sale in Summer 2008.

A prototype designed to explore the harder side of the XKR's character and allow Jaguar's engineering team to extend performance boundaries, based on the 2010 model year vehicle. The engines is rated 530 PS (390 kW; 523 hp) and 700 N·m (520 lbf·ft). It included a louder exhaust, 21-inch wheels and a lowered ride-height, Lime Green body, satin graphite detailing to the front grilles, headlights, door mirrors, side window surrounds, rear signature blade and bonnet louvres. The vehicle was unveiled in 2009 Goodwood Festival of Speed.

The vehicle was unveiled in 2010 Goodwood Festival of Speed. UK models went on sale in July 2010 with delivery in October.

The vehicle was unveiled at the Monterey Jet Center during the Pebble Beach Automotive Weekend.

Jaguar unveiled the new XKR at the 2011 to mark the company’s 50th Anniversary of Jaguar E-Type.

The convertible XK shares the same engine options as the coupé and features a conventional cloth top that will open or close in 18 seconds.

All models are fitted with a ZF six-speed automatic transmission with Jaguar's Sequential Shift and JaguarDrive selector.

In March 2011, with the launch of the 542 bhp (404 kW; 550 PS) XKR-S at the Geneva motor show, Jaguar revealed the details of a facelift for the XK. The new specification includes front and rear styling changes and internal trim changes. 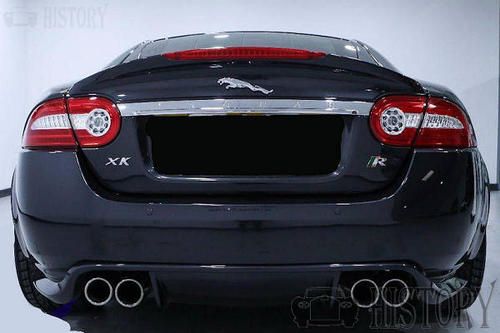