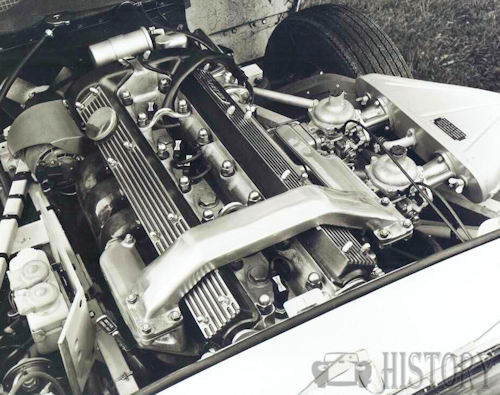 The Jaguar XK6  2.8 ,3.4 and 4.2-litre dual overhead camshaft (DOHC) inline 6-cylinder engine was introduced by Jaguar Cars in 1964 and manufactured through to 1992. It was produced in three displacements for Jaguar passenger cars, with other sizes being made by Jaguar and privateers for racing.

The 2.8 gained a bad reputation early in its career due to a tendency for excessive carbon deposits to accumulate on the piston crowns during low-speed running, which would burn through the crowns when run at higher revs. This was later cured by a switch to stronger pistons but the engine was also a mediocre performer offering no real economy benefit and it was dropped in 1973, to be replaced by the ‘new’ 3.4.

All of the 2.8-litre XK engines used the straight port head unpainted, which some sources may describe as "silver", and had ribbed cam covers.

The 2.8-litre XK6 was used in the following cars:

The "new 3.4" used the straight port head, had ribbed cam covers and the heads were unpainted.

The following table relates XK cylinder head type to Jaguar/Daimler model and includes the paint colours applied to certain versions of the cylinder head in the 1950s and 60s. Unpainted heads are sometimes referred to as "silver" but this is merely the natural colour of the aluminium alloy.

The 4.2-litre version of the XK was officially released in 1964, although racers had been boring the 3.8 out to 4.2 litres for years. The factory 4.2-litre block was a new siamesed sleeve design which used respaced cylinders set unevenly along the length of the block with new main bearing spacings and a new crankshaft. The middle two cylinders were moved closer together and the outer two moved further apart but the overall length of the block remained unchanged. This enabled the cylinder bores to be taken out to 92.07 mm (3.6 in) whilst retaining the familiar long stroke of 106 mm (4.2 in) for a total displacement of 4,235cc / 258.4cuin.

Despite the re-spacing of the cylinder bores, the cylinder head castings remained unchanged. As a result, the centrelines of the combustion chambers in the head no longer aligned precisely with the centrelines of the cylinders but this did not matter greatly as the combustion chamber diameters in the head were smaller than the cylinder diameters. The 3.8 and 4.2-litre cylinder heads and cams are therefore interchangeable. The 4.2-litre engine from the factory had unsmoothed steps between the inlet manifold and head, and the manifold gaskets were not a good match for the inlet ports. These engines therefore make excellent bases for some modification, achieving approx. 220 bhp (164 kW; 223 PS) SAE net and increased torque merely by "flowing" the head.

Published horsepower ratings of the various versions of the 4.2-litre are complicated by the switch from gross to net horsepower systems during its lifetime. For example, in 1965 the 4.2-litre with triple SU carburettors fitted to the US-specification E-Type was rated at 265 hp (198 kW) SAE gross whereas by 1969, now with twin Zenith-Stromberg carburettors, this had fallen to 246 hp (183 kW) SAE gross. The difference indicates the effect of the revised carburetion and other changes made to reduce exhaust emissions from US specification engines. Jeff Daniels' reference states that the similar twin Zenith-Stromberg version fitted to a US specification XJ6 was rated by Jaguar at 170 PS (125 kW; 168 hp) using the DIN net horsepower system, the difference being largely due to the effect of the gross versus net horsepower rating systems.

The 1987 Jaguar XJ6 was the last Jaguar car fitted with the XK6 engine. In 1992 the last Daimler DS420 Limousine was produced. Like all other DS420 limousines, it was equipped with a 4.2-litre XK6 engine. The 4.2 variant was also used in some military vehicles with relatively few modifications. The XK engine has the rare accolade of having been in production and service in cars spanning six consecutive decades.

All of the 4.2-litre XK engines used the straight port head. After the arrival of the ribbed cam covers in 1967 the heads normally remained unpainted, which some sources describe as "silver".

The 4.2-litre XK6 was used in the following cars:

It was also used in the Combat Vehicle Reconnaissance (Tracked) - CVR(T) - family of military vehicles: e.g.,

The block was made of cast iron (with the exception of some made of aluminium alloy for racing engines), with the crankcase split on the centreline of the seven-bearing crankshaft. The crankshaft was made of EN16 steel, heat treated prior to machining. An innovation was the fitting of a proprietary Metalastikvibration damper on the nose of the crankshaft to eliminate damaging crankshaft resonances. The design and materials of the bottom end of the engine hardly changed throughout its life, apart from the changes dictated by the respaced cylinders of the 4.2-litre version (also used by the 'new 3.4' litre version). The oil pump was changed after a couple of years from a relatively inefficient gear-type pump to a Hobourn-Eaton eccentric-lobe unit.

The most recognisable feature of the XK engine is the dual cam covers atop the engine, which were a polished alloy until a change to ribbed black and alloy finish in early 1968, four years or so after the introduction of the 4.2-litre versions in 1964. The unusual depth of the engine's cylinder head was dictated by the desire to make room for two generously-sized valves, whilst not excessively restricting the flow of gases into and out of the hemispherical combustion chambers. To satisfy these two conditions, a relatively wide angle between the valves was initially chosen, with quite long valve stems. To efficiently operate valves whose tops were such a long way apart, the dual overhead cam arrangement was found to be the most effective.

The cam lobes act directly on bucket type tappets, which are adjusted by means of shims between the underside of the bucket and the top of the valves. Two duplex chains drive the camshafts, one from the crankshaft to a sprocket at the level of the combustion chambers, and one from the sprocket to each camshaft. The original sprung slipper design of the lower cam chain tensioner proved to be too weak and after a couple of years was changed to an improved hydraulic design, using engine oil pressure. 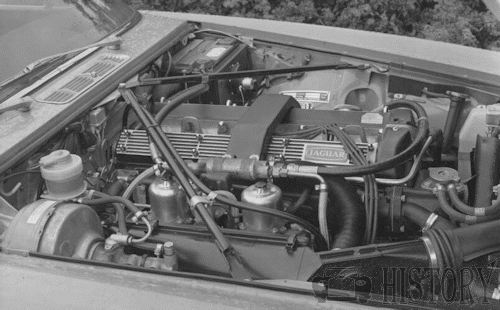