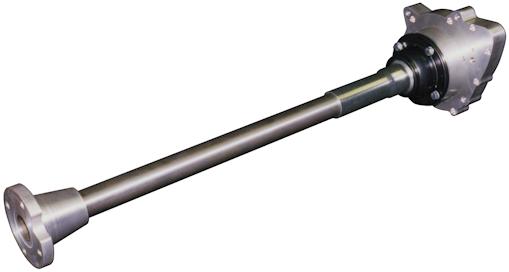 A torque tube system is a driveshaft technology, often used in automobiles with a front engine and rear drive. It is not as widespread as the Hotchkiss drive, but is still occasionally used to this day. Driveshafts are sometimes also used for other vehicles and machinery.

The "torque" that is referred to in the name is not that of the driveshaft, along the axis of the car, but that applied by the wheels. The design problem that the torque tube solves is how to get the traction forces generated by the wheels to the car frame. The "torque tube" transmits this force by directly coupling the axle differential to the transmission and therefore propels the car forward by pushing on the engine/transmission and then through the engine mounts to the car frame

In contrast, the Hotchkiss drive has the traction forces transmitted to the car frame by using other suspension components such as leaf springs or trailing arms. A ball and socket type of joint called a "torque ball" is used at one end of the torque tube to allow relative motion between the axle and transmission due to suspension travel. Since the torque tube does not constrain the axle in the lateral (side-to-side) direction a panhard rod is often used for this purpose. The combination of the panhard rod and the torque tube allows the easy implementation of soft coil springs in the rear to give good ride quality

Examples of the torque tube were the American cars of the Ford brand up through 1948, which used the less expensive transverse springs that could not take the thrus

Buick started using coil springs in the 1930s, as did Nash's 1941 '600' model; these also necessitated using a torque tube. American Motors (AMC) also continued to use a coil spring rear suspension design with a torque tube on their large-sized cars (Rambler Classic and Ambassador) through the 1966 model year. The 1961-1963 Pontiac Tempest incorporated an unusual curved “torque-tube” with a 4-inch drop (about 10 centimeters) that housed a 3/4 inch (2 cm) solid steel driveshaft (nicknamed the "rope shaft") without universal joints on each end. The main purpose was to make the floor lower, thus increasing the car's interior room. The Peugeot 504, Peugeot 505, (except estate/station wagons) and the Volvo 300 Series also used a torque tube.

The Czech made Tatra truck is the only full size truck using a torque tube and independent suspension on all wheels. 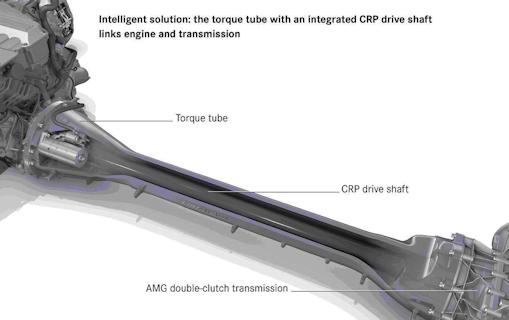