The fifth generation of the Honda Civic debuted in Japan on September 10, 1991. The new Civic was larger than its predecessor, had a more aerodynamic body and the wheelbase was increased to 257 cm (101.3 inches) for the three-door hatchback and 262 cm (103.2 inches) for the four-door sedan. The wagon was also dropped for overseas markets, while the previous generation station wagon ("Shuttle") continued in Japan. This generation of Civic used lightweight materials to create a fuel efficient economy car. Compared to the previous generation, the cowl was raised, which allowed for more suspension travel. Along with that change the ride became softer than that of the previous generation, which provided a more compliant ride at expense of crisper handling.

In addition, vehicles with the 1.6 L SOHC VTEC 125 PS (92 kW; 123 hp) engines such as the Si hatchback and EX coupé models found in the United States, provoked popularity of the (relatively) high-performance 1.6 L inline-four segment. In South Africa a unique model with the B18B3 from the Acura Integra RS was specially built to fill the gap left by the absence of the DOHC B16A VTEC engine in the range. 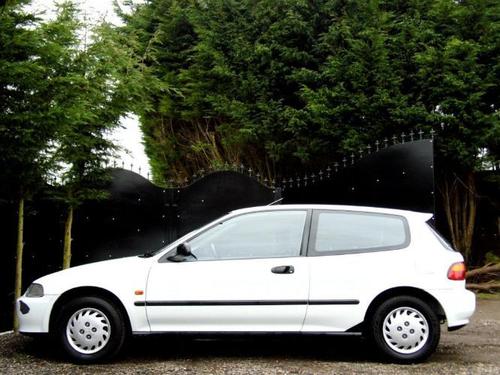 Trims available in the hatchback body style were the CX, DX, VX (EH2) and Si (EH3) initially for both the U.S. and Canada, however the VX and Si models were discontinued in Canada after model year 1993. With a total interior room (passenger and luggage) of 90 cu.ft., the hatchback was classified by EPA of U.S. as subcompact.

CX: The economical CX was the base model equipped with all-manual features, and power brakes. In the U.S., it came with the 8-valve 70 hp 1.5L D15B8 engine and manual transmission. With 42/48 miles per gallon (mpg) (city/hwy) [revised to 2008 EPA rating: 35/43 mpg city/hwy] or 40/47 mpg (city/hwy) [revised to 2008 EPA rating: 33/42 mpg city/hwy], the CX was the second most fuel-efficient Civic model of the fifth generation, after the VX. CX models in Canada came with the same 16-valve 102 hp 1.5L D15B7 engine as in the DX model, but could also be ordered with automatic transmission which also came with power steering. Some later CDM CX models (colloquially known as the "CX-Plus") could be ordered from the factory with a rear wiper, side mouldings and manual passenger-side mirror.

VX: Fitted with the same manual transmission, the VX was identical to the base model CX except that it gained improved fuel efficiency through a 92 hp 1.5 L VTEC-E engine yielding 48/55 mpg (city/hwy) [revised to 2008 EPA rating: 39/49 mpg city/hwy] or 44/51 mpg (city/hwy) [revised to 2008 EPA rating: 36/46 mpg city/hwy]. In Canada, it was rated by Transport Canada fuel consumption estimate: 4.7L/100 km city and 4.3L/100 km hwy Other added features were an 8K tachometer with redline at 6K RPM, lightweight 13-inch (330 mm) aluminum alloy wheels, as well as additional front & rear under-body trim additions to improve aerodynamic flow. The VX was also equipped with an aluminum alternator bracket, an aluminum front driver side engine mount, and a lightweight crank pulley. In addition, the instrument cluster featured a shift indicator light that would notify the driver when to shift upwards in order to achieve optimum mileage. To this day, the CX & VX models are lauded as one of the only gasoline-powered cars that rival the fuel economy of today's hybrids and diesels. In the March 2010 issue of Car & Driver for example, it mentions its long-term test car, a 2009 VW TDI Jetta with 6-speed dual-clutch auto transmission, got worse fuel mileage (38 mpg) than their 1992 Honda Civic VX test car (which got 41 mpg) and 2000 Honda Insight hybrid (48 mpg).

Si: Also introduced in 1992, the Si replaced rear drum brakes with discs, a power moonroof, cruise control, a dashboard clock, a 9K tachometer with a 7,200 rpm redline, plastic wheelcovers on 14 inch wheels, power side mirrors (body coloured, beginning in 1993), and a 125 hp (93 kW) 1.6 L single-overhead cam D16Z6 VTEC engine. In 1994, the driver's side airbag (a first in the Si) was complemented by a passenger side airbag, while rear speakers and optional ABS were also added (the VIN# will have the imbedded sequence "EH339" as opposed to the regular Si designation of "EH338" in the number). In contrast to subsequent Si generations, the D16Z6 powerplant was the same as used in the EX, although the automatic transmission was not available for the Si. It enabled the car to hit 0–60 in 7.5 seconds and a quarter-mile time of 16.3 at 86 mph. VTEC activated on the intake side and not the exhaust side, which was the result of the spark plug blocking the area where the cam follower would be. The Si and EX were also the only fifth generation Civics to feature a tachometer.

Trims available in the USDM sedan body style were the DX, LX (EG8) and EX (EH9), while the CDM models were branded slightly differently as the LX, LX "Special Edition" (1994–95), EX (EG8) and the EX-V (1992–93) (EH9). In Japan, a four-door sedan was introduced called Honda Civic Ferio, sold at Honda Primo dealerships, while a more upscale version was called the Honda Domani sold at Honda Clio. In Japan, the "Ferio" name was used from 1992 until 2006 on all sedans, regardless of trim packages installed.

The four-door wagon was not updated for this generation platform, and continued to use the previous generation internationally until February 21, 1996, when it was replaced by the Honda Orthia and Honda Partner sold only in Japan.