The seventh generation of the Honda Civic was released in September 2000 as 2001 model. Compared to its predecessor, it retained similar exterior dimensions, but increased significantly in interior space thus bumping up Civic to a compact car size segment. There was a flat rear floor, giving better comfort to the rear seat passengers. This generation abandoned the front double wishbone suspension, which had been used in the fourth to sixth generations, replacing it with MacPherson strut.

A 115 hp (86 kW) engine powered all Civics (except EX and Si), up 9 hp (7 kW) from the previous model. Power in the EX remained at 127 hp (95 kW), and all non-Si engines were stroked to 1.7 liters for North America. Smaller engines continued to be available for the rest of the world. 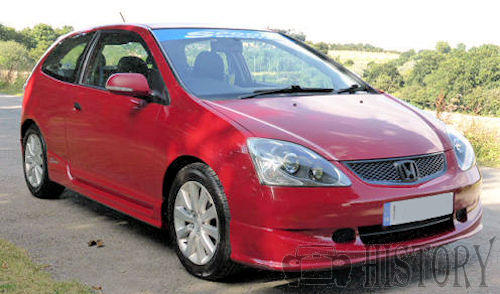 The hybrid version arrived at North America in spring 2002. It used both a small 1.3 L I4 main gasoline engine and auxiliary electric motors, producing a combined 93 hp. The electric motors are powered by a battery array which is charged by regenerative braking during deceleration, thus reducing exhaust emissions and extending fuel mileage to 46 mpg city / 51 mpg highway with the manual transmission according to EPA fuel mileage estimates.

Starting with this generation, cabin air filters (also known as pollen filters) were installed as standard equipment and are located behind the glove compartment internationally.

Different models were available for the Canadian market:

Up until 2003 there were DX and LX models for both sedan and coupé, with the coupé additionally having the Si trim, largely equivalent to the US market EX coupé.

The Civic Si returned to form as a hatchback, after having been sold only as a coupé in the previous generation. The body shape of this model was based on the "New Bullet-Form" concept, which aimed to create a more dynamic look and provide greater stability while traveling on highways or winding country roads. The interior layout also distinguished itself from other Civic Si generations with a dash-mounted shifter. The EP hatchback is also used for the second generation Civic Type R which was sold in Europe and Japan.

Shifting away from the B-series engine, the seventh generation Civic Si adopted the K-series K20A3 engine used in the Acura RSX base model rated at 160 bhp (120 kW) at 6500 rpm and 132 lbf·ft (179 N·m) at 5000 rpm. With a redline of 6,800 rpm, the Si distanced itself from the narrow, high-rpm powerband engine of its predecessor, and as a result saw a 20 percent increase in torque. Performance was relatively underwhelming compared to the competition; the switch to MacPherson struts from double-wishbone suspension resulted in less responsive handling, and a near-150 lb (68 kg) increase in weight to 2,744 lb (1,245 kg) contributed to slower acceleration than the lighter '99-'00 Si Much of the weight gain is attributed to the chassis' stouter structure when compared to the previous generation hatchback, with the '02 Si boasting an increase in torsional rigidity by 95 percent and a bending rigidity increase of 22 percent.

With the increased chassis rigidity compensating for weight gain, the 5th-generation Civic Si saw roughly the same performance numbers as the previous generation Si, with 7.6 seconds to 60 mph and 15.9 seconds at the quarter mile, which were comparable to that of Ford SVT Focus and Hyundai Tiburon GT V6.Other factors adversely impacting performance included the lack of an LSD (limited slip differential) and having to shift into third gear to get to 60. First gear ends at about 30, second ends at 55, and third ends at 82 mph (132 km/h).

The 2004–05 models received minor revisions. Cosmetic changes included revised headlight (dual bulb setup) and taillight designs, standard side skirts, and an option for a HFP. The suspension was updated with a change from 4 lug to 5 lug bolt pattern, a larger rear sway bar, and a change from 15-inch wheels (195/60-15) to 16-inch wheels (205/55-16). The interior received more silver accents in place of the chrome ones (the lock switch).

For the 2002 SEMA show, Honda unveiled the 2003 Civic Si Concept, which showcased the aftermarket versatility of the Si.

In Europe the Civic was sold also with a common-rail diesel engine produced by Isuzu Motors Polska. This engine is a 1.7L 4EE2 Circle L engine with 100 hp (75 kW).

The seventh generation North American Civic DX/LX/Value Package engines were the last in the Honda and Acura not to use Honda's variable valve time system aka (VTEC) along with the 1996-2004 Acura 3.5RL Non-Vtec engines. 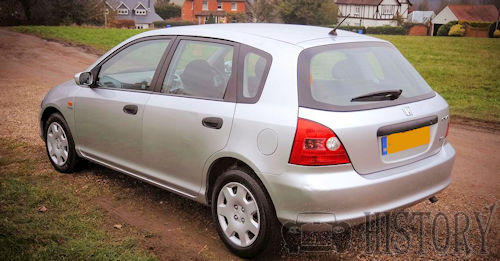