The Hindustan Ambassador is a car manufactured by Hindustan Motors of India. It has been in production since 1958 with few improvements or changes and is based on the Morris Oxford II model, first made by the Morris Motors Limited at Cowley, Oxford in the United Kingdom from 1956 to 1959. Sale of Ambassador taxis had been banned since April 1, 2011, a year after BS IV norms were rolled out in 11 Indian cities, including Kolkata. At present the company is in an extremely challenging situation with plummeting sales and loss of Rs 29.96 crore in 2011-12. The company could only sell around 2,500 cars in 2011.

However, recently the Ambassadors makers(Hindustan Motors)have started to fit the cars with a new, cleaner diesel engine, that complies with the new emission rules; and has now been able to resume taxi service in cities such as Kolkata, one of the cities in which it was banned. The Hindustan Ambassador is, once again, a familiar sight on India's roads.

Despite its British origins, the Ambassador is considered as a definitive Indian car and is fondly called "The king of Indian roads". The automobile is manufactured by Hindustan Motors at its Uttarpara plant near Kolkata, West Bengal. Some prominent Indian politicians, such as Sonia Gandhi, use the Hindustan Ambassador.

When the Birlas wanted a new model to replace their already old Hindustan models based on the Morris Oxford Series Il (Hindustan Landmaster), they scouted for the new Morris Oxford Series III. The car initially came with a side-valve engine but was later improved to an overhead-valve engine. Also the car at that point was quite an innovation with a fully enclosed monocoque chassis, which is why it is spacious inside.

Hindustan Motors Limited (HM), India's pioneering automobile manufacturing company and flagship company of the C.K. Birla Group, was established just before Indian independence, in 1942 by B.M. Birla. They began operations in a small assembly plant in Port Okha near Gujarat by assembling the then Morris 10 as the Hindustan 10. The Morris MO Series models (the earlier one and its next model with a new front grille) were by 1949 introduced, as the Hindustan 14. The production continued till 1954, after which the Landmaster based on the Morris Oxford Series II was introduced, with the same 1478 cc side valve engine, drawn from the earlier Hindustan 14.The same engine was used for the older Ambassadors Mark I from 1958 till 1960.

The Amby, as it is affectionately called, has been in continuous production since its inception, with very few improvements or changes.

In 1948, Hindustan Motors shifted its assembly plant from Port Okha in Gujarat to Uttarpara in West Bengal's Hooghly district and strengthened its manufacturing capacity in the automobile segment.

The 1954 Morris Oxford series II in India was licence-built at Uttarpara, (Hooghly dist.), West Bengal, three years after its debut in England and labelled as the 1957 Hindustan Landmaster. It had a rounded rear squab and a curvaceous sloping hood.

Engaged in the manufacture of the Ambassador, Contessa and utility vehicles like the Trekker, Porter and Pushpak, the plant also has to its credit, many innovations and improvements in the automobile industry in India. Hindustan Motors is the only manufacturing facility in the world to manufacture parts for Bedford trucks currently.

Ambassador Mark I to Mark IV

In 1957 all the tooling of the British Morris Oxford Series III was transferred to India. The car was renamed the Ambassador and series-production started in 1957.

Styling changes from the Morris Oxford series II (Landmaster) to Morris Oxford series III (Ambassador) included deep headlamp cowls and small rear wing "tail fins"—all the rage in 1956. The dashboard and steering wheel were completely redesigned. The Landmaster's flat-plane two-spoke steering wheel gave way to a stylish dished steering wheel with three spokes made-up of four wires per spoke, for the Ambassador. Also a new, dimpled hood made its debut. These models had a 1,476 cc side-valve petrol engine. In 1959 the side-valve engine was replaced by a 1,489 cc, 55 bhp overhead-valve BMC B-series petrol engine.

In 1963 it underwent a minor frontal facelift with a closely chequered grill and was named as the Ambassador Mark II. As with other British designed Mark cars, while there was never really any Ambassador Mark I, the arrival of the Mark II got people calling the older model, Mark I. Incidentally, the first ever produced Mark II in black was gifted by HM to the then Prime Minister Jawaharlal Nehru. In this period the Sales Manager, Helmuth Lindeman, unsuccessfully tried to persuade Birla Senior to use an Ambassador, as that would in his view, have improved the quality. The fact that Mr Birla had doubts on the reliability of the car and was not willing to use the car made in his factory was a clear indication of its quality.

In 1975 another minor facelift to the same grille and a much bigger frontal facelift, with a new dashboard all in black, new tail lights, number plate light and rounded parking light was turned out as the Mark 3, the most popular face of the Ambassador. By 1978, the Mark 3 was available in its Standard and Deluxe versions. The Deluxe version had a newer dashboard with four meters plus the speedometer. Just before the launch of the Mark 4, the Mark 3's had their front windscreen wiper configuration changed, with a common direction sweep for both wipers.This configuration is still prevalent in the new Ambassadors till date.

In 1979 the Ambassador got another facelift with a smaller chequered grill and square park lamps and separate blinker lamps incorporated on the semi front lip spoiler below the bumper. This model was named as Mark 4. In addition to the existing petrol version, a diesel variant was launched which was powered by a 1,489 cc, 37 bhp BMC B-series diesel engine. It was the first diesel car in India and was well received by the Indians. Mark 4 was the last of the Mark cars. For a short period the cars were available as "Deluxe" & later it was renamed Ambassador Nova. The Ambassador of 1990 was virtually identical to the 1956 original, with most changes being cosmetic. The changes were mainly the front styling and minor changes to the dashboard. This technological stagnation was mainly because of the protectionistic policies being pursued by the Indian government at the time, and there was little willingness on the part of Indian companies to innovate.

All said and done, the Ambassador has emerged as the car mass-produced for the longest number of years, with minimal design changes, on the same assembly line (Uttarpara,West Bengal,India) in the whole world (1958- 2013 and still going strong). No other car made in the world has surpassed this record.

In an attempt to increase its appeal, in 1992 another version was released. Dubbed the Ambassador 1800 ISZ, this model featured a 75 bhp 1,800 cc Isuzu inline-four engine and a five-speed manual gearbox, and also had the option of bucket seats, as opposed to the earlier bench seats. Also, the entire dashboard was redesigned. Instrumentation panels were shifted from the centre of the dashboard to the right, behind the steering wheel. Seat belts became mandatory. Incidentally, HM was on its toes after the mid-1980s after the assassination of Prime Minister Indira Gandhi in 1984 and the impending terror threat to the new leadership, coupled with the inclination of the Indian political class to use the Ambassador. These factors compelled the car maker to shop for a more powerful engine, that could effectively propel the old beauty with the added weight of armour plating, with bullet-proof glass and air-conditioning as essential add-ons.The Isuzu 1817 cc engine was zeroed upon, that also by 1987 propelled the HM Contessa 1.8 GL.The Contessa engine developed 88 bhp, but was detuned for Ambassadors for the open market. The ISZ 1800 engines came much earlier and were available by 1985, for the armour plated, VIP Ambassadors. By the early 1990s, this 1817 cc/ 75 bhp (@ 5000 rpm), OHC, Isuzu engine, that had 4 in-line cylinders and a max torque of 13.8 Kgm (@ 3000 rpm ), was available as an option, in all the Ambassadors commonly available for sale.

After the millennium renovation project at the Uttarpara Plant, the Ambassador was re-engineered and renamed the Ambassador Classic. The new model featured a redesigned dashboard, polyurethane seats, pull type door handles and the steering column gear lever was replaced by floor shift gears and had a tweaked up suspension. The higher end models featured servo assisted disc brakes and power assisted TRW steering.

Ambassador Grand was launched in 2003 and as per the manufacturer, the new version had 137 changes compared to its predecessor. The notable changes included body coloured wrap around bumpers, camel coloured interiors, fabric seats, remote shift gear lever, moulded roof and door trims, Salisbury axles, bigger rear wheel drums, improved suspension with anti roll bar and Metlon bushes, central door lock, factory fitted music system and an optional sun roof. The acoustic insulation of the Ambassador Grand was developed by Treves of France. The Grand version of Ambassador was available only in 2.0L and 1.8L engines at first and later in 2007 the 1.5L model was added to the line.

In the late 1970s a limited batch of Mark III Ambassadors were produced with 1,700 cc engines.They were fitted with Constant Velocity SU side-draft carburettors of an earlier era instead of the more common indigenous variable velocity Solex down-draft units. The engine blocks of these cars had "1700" etched on them instead of the usual "1500". These were probably produced to handle the extra load of the piston-driven air conditioner compressors available in those days. The trim (metal beading) of these cars were a throwback to the sixties because they were chromeplated instead of aluminium.

Many local customisers offer stretched versions, though they are not very popular. One such manufacturer is Parikh, whose effort is called the Ambylimo 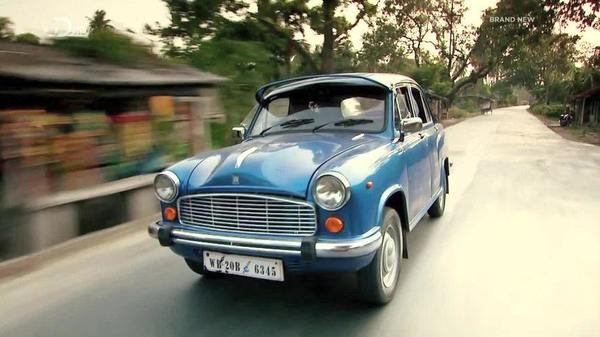