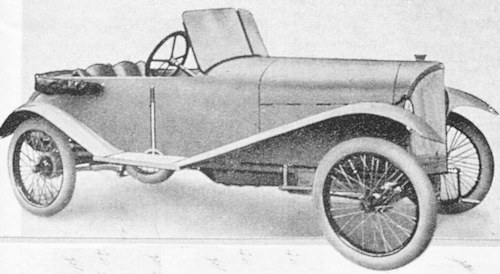 Auto-Staiger GmbH is a car dealership based in Stuttgart , which was originally founded as a bicycle shop and was temporarily even a manufacturer of automobiles in the 1920s along with motorcycles and bicycles.

In 1897, the 21-year-old Paul Staiger for the first time Württembergischer champion in cycling. The cyclist soon recognized that a large two-wheeler market was developing parallel to the beginning of motorisation in Germany. So in 1898 he opened a bicycle shop in Tübinger Strasse in Stuttgart.

Already in 1899 Paul Staiger expanded the business by acquiring a bicycle and accessory wholesaler. In addition, he started in the same year with the sale of automobiles , including Renault . A year later he also took over the general agency of Opel -cars in the Kingdom of Württemberg . In 1901, new and larger operating rooms were moved into the military road in Stuttgart.

In the First World War Staiger repaired military vehicles: The car trade came to a halt in the episode. Only the business with bicycles and accessories continued. Nevertheless, the cooperation of bicycle and automobile went until the year 1920: Then the two areas of activity were broken down, the bicycle area was taken over by the Staiger wholesale GmbH.Opel could deliver only a few automobiles after the First World War, therefore Paul Staiger decided 1922 for the production of own automobiles. The only model 04/12 PS was a two-seat compact car with a four-cylinder engine . 1924 ended after about 500 manufactured copies of production, since Staiger now sold more vehicles of the Opel 4/12 hp than its own model.

Paul Staiger started with a Staiger sports car at car races, including the Burrenwald race (Biberach / Riss), a mountain / flat race over the distance of 9.0 kilometers. In the class 1, with the start number 3, in the time of 7 minutes and 56.4 seconds, he finished second. Class winner was Wilhelm Diez with his Gridi.Staiger later represented the brands Buick and Chevrolet .

During the Second World War the company suffered. The destruction in the bombing war followed the confiscation by the occupying power. In the course of the reconstruction, the company was re-established in 1948 as Staiger wholesale KG. The actual ascent began in the 1950s. Staiger bikes made a name for themselves as solid vehicles. Until 1968, the company sold in addition to bicycles and other equipment such as washing machines. And from 1965 to 1975, in addition to the actual bike shop and car parts on the counter. At the same time, branches and distribution warehouses in Southern Germany were created in the 1960s. In 1982, the Staiger wholesale KG moved to Gerlingen near Stuttgart.

In 1987, the bicycle distribution network was consistently expanded. So far the motto was that Staiger had to confine itself to areas south of the Main line, was supplied from this year to the whole Federal Republic. In this connection Staiger disbanded the company traffic and with it also the branches and distribution warehouses, the dispatch was transferred to Federal Railways and forwarding agencies.

In 1988, the takeover by E. Wiener GmbH & Co. KG took place in Schweinfurt. The production in Gerlingen near Stuttgart was stopped and continued in Schweinfurt. In 1994, the sales office in Stuttgart was closed.In 1997, Winora and Staiger merged with Winora-Staiger  GmbH, which has been part of the Dutch Accell Group since 2002 . The Staiger brand bicycles are no longer manufactured in Germany. In 2014 AVAG Holding bought Auto-Staiger .