Vehicle manufacturer Hamelin Germany from 1907 to 1929

The Norddeutsche Automobilwerke GmbH, often abbreviated by NAW, was a German car manufacturer based in Hameln .

In 1907, the Norddeutsche Automobilwerke was built in an industrial area in Hameln by the company founder Hans Hartmann . 1908, the plant began production of the passenger car of the lower middle class Colibri . From 1911, the model Sperber came to be exported to numerous countries, including Russia, Baltic and Scandinavian states, Austria, Great Britain and overseas to South Africa and New Zealand . In 1914 annual production was around 800 vehicles.

During the First World War , production stagnated and only armaments such as trucks and grenades were produced. In 1917, Walther von Selve took over the company and built the Selve Automobilwerke GmbH in 1919 . However, the NAW stopped production in 1929 as a result of the global economic crisis .

At the beginning of the Nazi era , the plant was reactivated and continued as Deutsche Automobilwerke AG (DAWAG). The designer Robert Mederer designed a car with a new engine. The vehicle at 2300 Reichsmark  the cost was too high. But awarded the major contract for the design of a Volkswagen to the Reich Association of the Automotive Industry , which commissioned Ferdinand Porsche with the construction of only 990 Reichsmark KdF car . This ended the automotive industry in Hamelin. 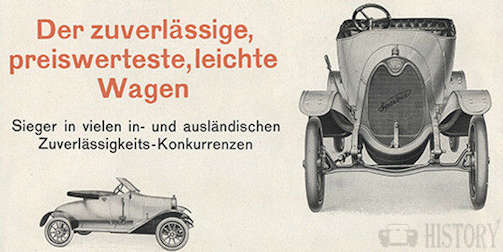