Automotive manufacturer Germany From 1911 to 1945.

Wanderer  was a German manufacturer of bicycles, motorcycles, automobiles, vans and other machinery. Established as Winklhofer & Jaenicke in 1896 by Johann Baptist Winklhofer and Richard Adolf Jaenicke, the company used the Wanderer brand name from 1911, making civilian automobiles until 1941 and military vehicles until 1945.

Winklhofer & Jaenicke was established in 1896 in Chemnitz. It built motorcycles from 1902 and automobiles from 1903. The Wanderer brand was chosen in 1911 for overseas exports and was soon adopted for domestic sales.

In 1905, the first car-prototype hiker's car was built , followed in 1907 by the second and in 1911 at the Berlin Motor Show the Wanderer 5/12 hp type W1 was shown. In 1913, the automobile series production could be started. "We had a very cute, small car in mind, smaller than all previously built cars, low in purchase price, economical in gasoline, rubber and oil consumption, undemanding in space requirements, but big cars equal in speed and in taking slopes", wrote Winklhofer later.

Based on the operetta Puppchen by Jean Gilbert , which premiered in Berlin in the same year , the petite car (1.5 m wide, 3 m long) was popularly called Puppchenafter a performance in Chemnitz . As early as 1913, the development came to W2 , which made 15 hp. The further development went up to the W8 5/20 HP 1926/1927. To expand the car production Wanderer built another factory in the Chemnitz suburb of Siegmar , which began production in 1927. For the successor of Puppchen 1930 Ferdinand Porschein Stuttgart, the construction of a six-cylinder and two eight-cylinder engines commissioned. Only the six-cylinder debuted in 1931 in the W14 12/65 hp with a three-liter light-alloy engine , because problems of the company let it move away from vehicle production. Also under pressure from the Dresdner Bank , which had granted Wanderer loans of more than five million Reichsmark , Wanderer sold licenses for the heavy motorcycles to the Czech engineer František Janeček, who founded the motorcycle brand Jawa , and concluded in mid-1932 with the initiative of the Saxon Landesbank Auto UnionAG a purchase and lease for the modern Wanderer vehicle plant in Siegmar. The Auto Union Group produced alongside Audi , DKW and Horch further car of the middle class under the brand name Wanderer .

Under the direction of Auto Union came in 1933, the W21 , a direct competitor of the Mercedes-Benz 170 , on the market. From this year, the Wanderer brand offered a wide range of six body models with three engines. From the most successful model Wanderer W24 were manufactured from 1937 to 1940 about 22,500 copies. A special feature of several Wanderer models was at the time a split windshield.

The first two- or three-seater models used four-cylinder 1145 cc and 1220 cc engines. The 1220 cc model lasted until 1925. The first six-cylinder model appeared in 1928. By 1926, when Wanderer introduced a successful Typ 10, the company was making 25 vehicles a day; parts were made at the old plant in Chemnitz and assembled at the 1927 built new site in Siegmar, delivered by rail right to the assembly line. Motorcycle production continued in Chemnitz alone.

During the Great Depression, in 1929, the company owner, Dresdner Bank, sold the motorcycle business to František Janeček, and in 1932 divested the rest of Wanderer. The car division with its Siegmar factory became part of Auto Union together with Horch, Audi and DKW. In this quartet, Horch was positioned as the luxury brand, DKW built cheap two-stroke cars, Audi and Wanderer competed in different segments of mid-priced, technologically advanced small cars (heaviest, 6-cylinder Wanderers reached 1.5 tons dry weight). Wanderers of the Nazi period acquired a trademark radiator design, shaped as a heraldic shield.

The next model W17 7/35 PS was propelled by a new 1692 cc OHV four-cylinder engine developed by Ferdinand Porsche. In 1933 the new Audi Front was equipped with the Wanderer W22 engine, a 1950 cc OHV six-cylinder, also a construction of F. Porsche. The top model from 1936 to 1939 was W50, propelled by a 2257 cc six-cylinder engine. From 1937 on there were also sporting fours (W24 and W25) and another six-cylinder model of 2632 cc (W23), propelled by new Flathead engines constructed by Auto Union itself. Wanderer cars were always admired for their high quality and sporting character. During World War II all civilian production was replaced in 1941 with licence-built military vehicles, such as Steyr 1500A light truck. A subcamp of Flossenbürg concentration camp, KZ Siegmar-Schonau, was operated during the war to provide slave labour for the Wanderer vehicle plants. From 1943 on the Auto Union Siegmar plant produced Maybach HL230 V12 engines, used in many heavy tanks of the German Wehrmacht.

The Wanderer Siegmar plant (now Chemnitz) of Auto Union were destroyed in early 1945, closing this chapter in the history of automobiles. Post-war efforts to restore East German auto industry concentrated on Auto Union facilities in Zwickau and Zschopau: Wanderer car production never recovered, with Auto Union relocating to Ingolstadt, West Germany, where the company was rebuilt based using the DKW and ultimately, the Audibrand. 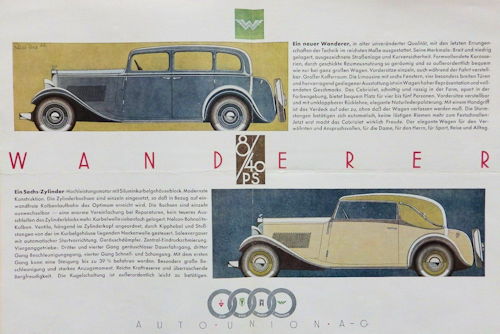