Automotive manufacturers Berlin Germany From 1901 to 1934 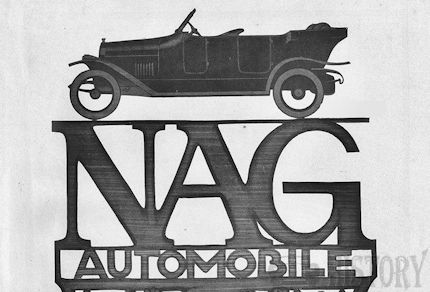 In 1902, German electrical company AEG purchased the coachbuilding side of Kühlstein under engineer Joseph Vollmer, renaming it NAG. The company's first two cars were reliable, if unoriginal: the two-cylinder Typ A and 5.2 liter (317ci) four-cylinder Typ B, both with chain drive, which resembled contemporary Mercédès.Shortly, an enlarged Typ B2, with 40/45hp(30kW) 7.9-liter (482ci) four, appeared. In 1907, one of these was given to the Empress Auguste Viktoria.

The next year, AEG got out of the car business, but NAG continued alone, introducing a 15 hp (11 kW) 1502 cc (91.7ci) four called Puck, with a remarkable (for the period) ability to rev to 3000 rpm, which may have contributed to its ability to win the Gothenburg Cup at the Swedish Winter Trials in 1912, 1913, and 1914. This sporting reputation was balanced by "aggressively ugly Prince Henry-type bodies".

The economic situation was so serious, NAG partnered with Brennabor, Lloyd, and Hansa to form GDA (what in the U.S would be called a trust), to prevent competition from destroying them all. It proved successful for NAG, which prospered, enough to build the C4b sports variant, designed by chief engineer Christian Riecken (a Minerva racing driver prewar).

In 1926, Protos (which had built the winner of the New York-Paris race) was acquired from Siemens-Schuckert, leading to "a series of dull six-cyliner cars". The next year, NAG again expanded, taking over Presto, which had just bought Dux, continuing to build the 2.6-liter Typ F and 3-liter Typ G. The difficulty was, despite their quality, none of these were distinctly different from other German cars of the period.

In response, NAG created a disastrous straight-eight (abandoned due to crankshaftwhip), which was never built, then hired former Impéria and Steiger man Paul Henze, "one of Germany's most gifted car designers", in an effort to remedy this situation with a new top-line car. Henze settled on a 4540 cc (277ci) V8, Germany's first to enter production which became "one of the outstanding German luxury cars of 1931, the NAG 212."

Rather than rely on conventional shaft drive, however, NAG chose to attempt to fit a Voran FWD system (designed by Richard Bussien) to a backbone chassis with independent suspension, which proved too ambitious, and the development costs disastrous.

In 1934, NAG ceased car production, while NAG-Büssing commercial vehicles continued to be produced for a few more years. 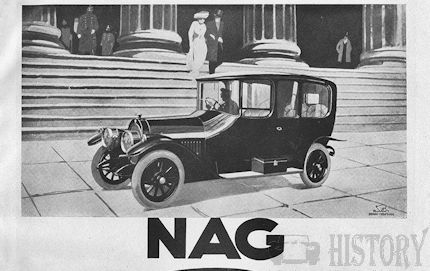