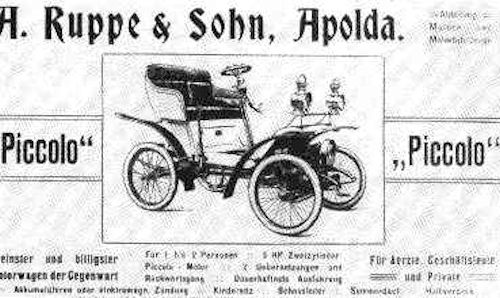 The Apollo was a German automobile manufactured by Ruppe & Son of Apolda in Thuringia from 1910 to 1927; the company had previously offered a car called the Piccolo. The first Apollo was called the "Mobbel", and featured an air-cooled 624cc single-cylinder ioe engine.

The company also offered air-cooled 1608 cc in-line fours and a 1575 cc V-4. Four separate cylinders inline powered the model "E" (1770cc). The model "B", designed by racing driver Karl Slevogt, had an ohv 960 cc four-cylinder engine. Another of the designer's fine creations had an ohv 2040 cc engine. Other Apollos had sv four-cylinder engines of up to 3440 cc; some post-1920 models featured wishbone suspension.

The last cars produced by the company had ohv 1200 cc four-cylinder engines; some had sv 1551 Steudel four-cylinder power units instead. The famous designer of two-stroke engines, Hugo Ruppe, was the factory founder's son; in 1920 Apollo took over his air-cooled MAF cars. During the mid-1920s, Slevogt raced cars of this marque with streamlined Jaray bodies.