The GAZ Tigr (Russian: Тигр and English: Tiger) is a Russian 4x4, multipurpose, all-terrain infantry mobility vehicle manufactured by GAZ, first delivered to the Russian Army in 2006. Primarily used by the Russian Federation's armed forces, it is also used by numerous other countries and organizations.

The Tigr was first shown as the IDEX exhibition in 2001. Pilot production started in 2004 with 96 vehicles. The Russian Army officially adopted the GAZ-2975 into service at the end of 2006. The vehicle was then officially manufactured in 2007.

During the 2010 Interpolitex exhibition, MIC presented the upgraded version of GAZ Tigr-the VPK-233114 Tigr-M-with a new YaMZ-534 diesel engine, additional armour and an NBC protection system. This new GAZ Tigr-M entered service with the Russian army during the first half of the 2013. Mass production and the export version have already been launched.

Tigr armoured cars were reported to be among the AFV's deployed by Russia in the Crimean crisis, part of the fallout from the Ukrainian revolution.Interestingly, they seemed to belong to the Russian Naval Infantry, but that combat arm had not been previously identified as a Tigr user, suggesting that the examples spotted (in a column near Sevastopol on the night of February 28th, 2014) are vehicles transferred or on loan from their primary military user, the Russian Army.

Designed for performance in mountain, arctic, and desert environments, The Tigr is capable of operating at ambient temperatures ranging from −14–50 °C (7–122 °F). Moreover, the vehicle has approach and departure angles of 52 degrees and a wading depth of 1.2 m (3.9 ft).

The Tigr is produced in multiple variants.

Unarmored civilian version of the Tigr, much like the Hummer H2 draws from the military HMMWV. Released a small series from 2008, mainstream sales at dealers were planned to start in 2009. The car is available in two trim levels-luxury and regular.

The standard SUV is mechanically very similar to the military Tigr. It is packaged with a Steyr turbodiesel with 190 hp (140 kW) or six-cylinder Cummins B205 with 205 hp (153 kW) and is designed for speeds of up to 160 km/h (99 mph). Interior details are borrowed from the GAZ Volga and GAZ Gazelle.

In 2007, a ceremonial parade variant was designed. The ceremonial Tigr is a two-door convertible with a removable rigid roof. It features two seats in the front and one in the back, and is finished with modern luxury car appointments. This Tigr is equipped with an automatic Allison 1000 series transmission and Cummins B205 turbodiesel. Vehicle weight was reduced to 4,750 kg (10,470 lb), as this version is unarmoured.

In November 2008, a prototype of the parade Tigr was presented to the Minister of Defense Anatoly Serdyukov. Subsequently, three vehicles were ordered and used in the Victory Day parade on May 9, 2009 at the Palace Square in St. Petersburg and also at the 64th anniversary of Russia's WWII victory.

This Tigr is used by the Russian Interior Ministry in counter-terrorism operations and territorial defense. It is armoured, with IEC 50963-96 Class 3 side/rear protection and Class 5 frontal protection. The vehicle has accommodations for seven occupants including the driver. Early models permit the firing of personal weapons through one-way portholes in the body. In later models personal weapons can be fired through portholes in the armored glass. An automatic gun carriage can be fitted to the roof, along with radio signal jamming equipment.

The SPM-1 Aircraft Assault Vehicle is an SPM-1 fitted with a large remote-control hydraulic ladder system. It is designed to provide access to the second or third floors of buildings and aircraft.

This Tigr is an SPM-1 with GOST 50963-965 level 5 ballistic protection all around (instead of a mixture of level 3 and 5). Two additional glass hatches on the roof allow for the firing of personal weapons.

This variant is designed as a command center for special events and crises. It is a SPM-2 fitted with extensive communications equipment.

In 2011, the Tula Instrument Design Bureau demonstrated an upgraded Kornet-EM antitank missile system. Two such units were mounted on a modified chassis of the SPM-2 Tigr. The machine is equipped with two retractable launchers for 8 missiles and gunnery equipment (remote weapons control with screens to display images from the sighting systems), as well as 8 additional missiles. Currently, this antitank system is being tested at Kapustin-Yar. Presumably, "Cornet-D" is the official Russian Armed Forces name, while "Kornet-EM" is the export name.

In early 2010, an improved Tigr armored vehicle with a 420-horsepower 5.9 litres (360.0 cu in) Cummins ISB and a GM 545RFE automatic transmission was created. This engine/transmission combination was originally designed for a Dodge Ram pickup. Externally, the vehicle featured an additional air intake on the bonnet and enlarged brakes. Acceleration time to 100 km/h (62 mph) was reduced from 35 to 23 seconds compared to the standard version, and the top speed increased from 140 km/h (87 mph) to 160 km/h (99 mph).

During the 2010 Interpolitex exhibition, the Tigr-M was announced. It featured a new YaMZ-534 diesel engine, a new armored hood, air filter installation, an increase in the number of rear passenger seats (from 8 to 9)and the replacement of the bicuspid rear hatch with a large square hatch.

Currently, the Tigr-M is mass-produced and supplied to the Russian Army.

A prototype vehicle was first shown at the Bronnitsi Armoured Vehicles Show on June 10, 2011. Based on the SPM-2, the SPV is designed for combat officer transport. It has a four-door station wagon body with increased GOST 6A armor protection (heavy mine protection and special shock-absorbing seats/footrests which are not attached to the floor). As of November 2012, tests are being conducted.

The Tigr chassis has been fitted with the 1L122E radar to allow the vehicle to simultaneously locate 15 aerial targets per second and perform target assessment in one second. Its purpose is to give Russian soldiers armed with MANPADS a command and target indication vehicle to receive more precise target data. The vehicle can deploy within five minutes and operate in temperatures from -50 to 60 degrees Celsius (-58 to 132 degrees Fahrenheit). Development started in mid-2013, with the first prototype delivered in May 2014. The vehicle is currently an independently developed prototype, with talks being held for trials and the follow-up launch of series line production.

In 2010, an international forum in Zhukovsky publicly presented three prototypes of a modular all-wheel drive family of vehicles, called the MIC-3927 Wolf. Like the Tigr, it was developed by the Military Industrial Company of Russia.

In 2012, orders of the Tigr were cancelled in favour of the Wolf; however, orders were resumed.

Emirates Defense Technology (EDT) initially started the Nimr project in the UAE. Engineers from the Industrial Computer Technologies engineering firm (a subsidiary of GAZ) were then subcontracted to complete the detailed engineering and prototyping of the first Nimr 1 prototype. Further developments of the Nimr prototype and the complete development of the first generation Nimr vehicles was carried out in the UAE by the Bin Jabr Group.

The Nimr is a scaled-down Tigr, designed specifically for the harsh desert climates found in the Middle East. 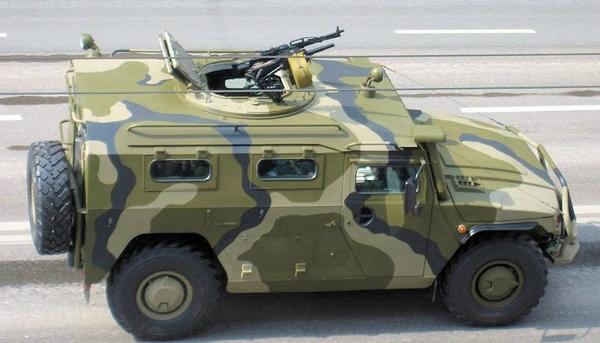