Ford Falcon First generation was a mid-sized car at first the main production built in the USA in the early 1960s and then also built Worldwide.

In the 1950s, the three major American car companies Ford, General Motors (GM), and Chrysler produced larger cars for the US and Canadian markets with almost every new model year, because large models made a larger contribution and customers were looking for longer time increasingly larger cars demanded.

In the sales crisis of 1958, however, the companies realized that their previous model policy no longer worked. While the big three suffered all the heavy losses, AMC was very successful with its Rambler American, the only compact car of American manufacture. At that time, the VW Beetle found more and more buyers. Almost simultaneously introduced in the fall of 1959 for model year 1960 Chrysler the Plymouth Valiant, GM the Chevrolet Corvair, Ford the Falcon and shortly thereafter the derived Mercury Comet. Built like European cars with a Unibody construction and a distribution of weightof  54.3 % to the  front axle, 45.7% at the axle rear axle with coil spring front suspension, leaf spring rear suspension, and drum brakes front and rear but inside it had room for up to six passengers.

In North America in the 1960s, the Ford Falcon was considered a compact car, abroad rather than a mid-size car.  Ford boasted of the good fuel economy achieved by the six-cylinder with the first Falcon fitted with a lightweight 95-hp (70 kW), 144 CID (2.4 L) Mileage Maker straight-six with a single-barrel carburettor. 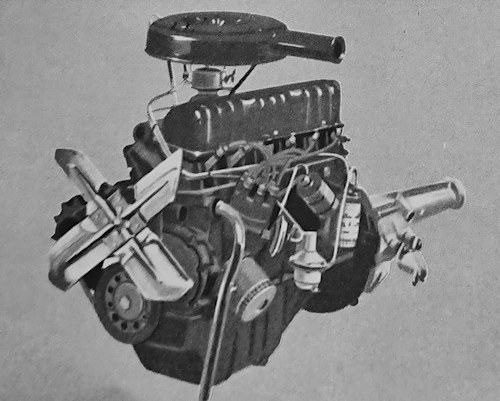 By 1963 more sporty "Sprint" model were introduced now with a V8 at the end of the First-generation production These first-generation Falcon Sprint cars were the basis for the new 1964 ½ year Mustangs to be built. For Transmission a three-speed manual column shift was standard fitment, and the two-speed Ford-O-Matic automatic was optional. And by 1962 offered a four-speed transmission. 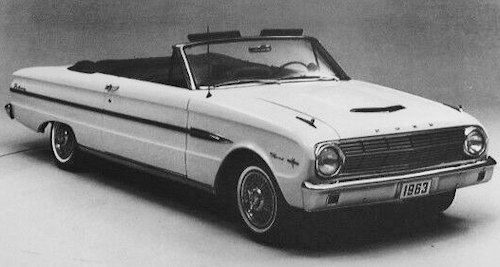 The 1962 model year had a Squire model of the four-door station wagon with faux wood trim along the sides of the car.

The higher trim level bucket-seat "Futura" model was offered with a slightly upgraded interior, factory-installed safety belts, along with spears type side trim design, and different emblems. Halfway through the model year, Ford changed the roof line at the back window design the two-door Futura sedan sported a flat rear window in place of the wrap-around window on earlier model.