While the Fiesta were marketed as XR2 , there were for the sportier models of the Escort XR3 and XR4 for the Sierra .The first was the Fiesta XR2 mk1 of the first series .

The 1.6-liter Kent engine had a displacement of 300 cc larger than the next-smaller engine in this series, producing 13 kW (18 hp) more.

Externally, the XR2 differed from the other vehicles of this model by plastic body extensions, a small tailgate, round headlights, alloy wheels, a lowered body and a sporty decor with rally type stripes. The interior included a sports steering wheel, sports seats and a tachometer as standard equipment.

With a mechanical four-speed transmission accelerated the Fiesta with 62 kW (84 hp) in 10.1 seconds to 100 km / h. The fue mixture preparation of the OHV engine was carried out by a Weber carburetor, and the ignition system was contactless .

Two-part wishbones with tension struts and MacPherson struts are installed on the front axle . The rack and pinion steering is combined with a safety steering column , but power assistance was not available as standard or optional equipment. 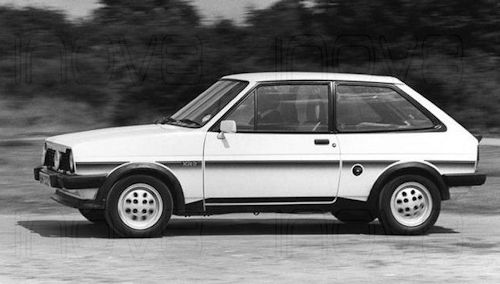 The XR2 is lowered and equipped with a specially tuned chassis and a stabilizer on the rear axle. With the XR2 , the Panhard rod is made of solid round material instead of a sheet steel profile.

On the front axle there are disc brakes with floating brake calipers , on the XR2 the discs are internally ventilated. Drum brakes are installed on the rear axle, and the parking brake also acts on them.

The XR2 are equipped with contactless ignition systems with an external ignition controller.