The Ford Streetka was a car model of the car manufacturer Ford . This Roadster , which was built by the Italian company Pininfarina.

The Streetka was presented by Ford at the Turin Motor Show 2000 as a study. The vehicle was based on the concept car Ford Saetta , developed by Ghia and presented in 1996 at the Paris Motor Show. It was a pure two-seater with a fabric hood. From 2004 there was the car alternatively with a hardtop to buy. The Streetka's design was based on that of the Ford Ka with its new-edge design , so the Streetka is often falsely referred to as the convertible version of the Ka. A modified chassis and wider aprons with standard 16-inch alloy wheels gave the Streetka a much sportier look.

These were later at Sportka, a more powerful version of the Ka. Particularly striking was the center back underneath the license plate in the rear apron mounted, round reversing lights.The Streetka had a standard central locking with radio remote control, tachometer, fog lights and ABS .

Although the study came up with a revolutionary interior design, the production version of the Streetka was introduced at the Paris Motor Show 2002 with the Ka's conventional dashboard .

The Streetka was based, as well as the Ka, on the floor of the Ford Fiesta '96 . It was fitted with a 1.6 liter Duratec engine. This cast iron -engine was with overhead camshaft and aluminum - Cylinder head equipped and developed 70  kW (95  hp ). This had hydraulic rams and a timing chain instead of a toothed belt , which kept the maintenance costs low. From 2003, this engine was also available in Sportka .

The power transmission was via a hydraulically actuated clutch and a five-speed manual transmission . Fuel tank 40 litres.

In January 2005, there was a facelift, from now on new vehicles - just like the Ka - equipped with another instrument panel with "classic" glove box. There were also new electronic functions, for example a freely programmable windscreen wiper interval. The top hatch could now be opened without active ignition and there was a flashing signal when opening the car lock by remote control.

Ford produced a special edition of 8 vehicles in 2004 for the movie Thunderbirds , painted in pink. On a plaque in the interior next to the serial number is the signature of Sophia Myles , who drove the car in the role of "Lady Penelope".  Kylie Minogue also made a TV advert for the Streetka at the time. 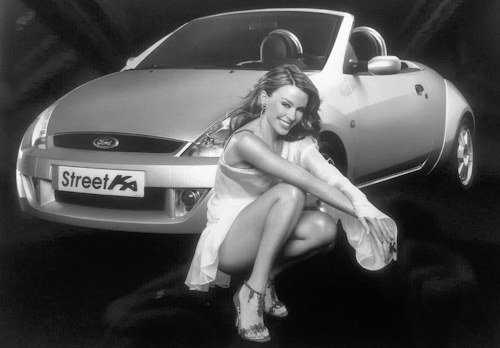