The Ford Sierra XR4i was first  introduced in March 1983 at the Geneva Motor Show.The first Sierra XR4i was not recognized as a standalone sports model,However, the XR4i was already homologated in the year of its appearance as XR4Ti  in motorsport.

The derived from the production model sports coupe was equipped with the so-called Cologne V6 gray cast iron engine with Bosch - K-Jetronic , 2772 cc displacement and a power of 110 kW (150 hp). The same engine used in the XR4i also in the Ford Capri with another exhaust system 160 hp (118 kW). The top speed was 211 km / h and the Sierra accelerated from 0 to 100 km / h in 8.4 seconds. Some tuners offered for the XR4i turbo conversions such as turbo technics , which increased the power up to 155 kW (211 hp).

The base price and its proximity to the introduced and direct competitors BMW 323i , the Mercedes 190 E 2.3 and the Audi 80 Quattro and Porsche 924 from the time .

Externally, the XR4i differed clearly shows some sportiness from other Sierra variants. With gray-colored wheel arches, plastic planks from the A to C pillars, 5 1 / 2x14 "aluminum wheels with 195/60 tires, a double rear wing (from prototype sample 3, thus improved contact pressure on the driven rear axle) At the time, this followed the stylistic trends of the early 1980s to optically enhance sports saloons with spoilers and sills, and a red stripe around them was supposed to enhance the sporty look of the XR4i emphasize sustainably.

Greay and red cockpit, door and side panels as well as the shift knob on a five-speed gearbox. While ventilated disc brakes were mounted on the front, enlarged drum brakes were used at the rear.

A successor model (also called XR4i ) was offered from the spring of 1990 and in contrast to the predecessor, a more visually inconspicuous variant with a now gaunt Ghia style equipment level. This XR4i was equipped with a heated windshield, power windows, comfortable interior, fog lights, rear spoilers and body-colored bumpers and dual-beam headlamps.

In September 1991, Also in Europe an additional derived from the XR4i special model called GT was introduced, which was based on the equipment CLX / sapphire . It was available in all body versions. However, the Sierra GT was differently equipped, such as with integrated rear seat headrests, 14-inch aluminum wheels, velor covers and a modified rear wing.

The production of the last XR4i and GT ended like those of the other Sierra variants in February 1993.

Although the model range of the European Ford factories was uniform at the time of its introduction in September 1982, concessions were made to the British market. So after the first revision in January 1987 no longer available with three doors and hatchback. The Sierra Sapphire was available with notchback and the grille, which was introduced in the other versions in March 1990. In Argentina , the Sierra was sold with modified bumpers until 1993. They did not participate in the facelift of 1987.

From the summer of 1984 until the end of 1989, the exclusively three-door XR4i was exported to the US and Canada as Mercury XR4Ti , where it was distributed through Lincoln Mercury dealers, just as it had previously been practiced with the Capri. The Merkur XR4Ti was manufactured by Karmann in Rheine. 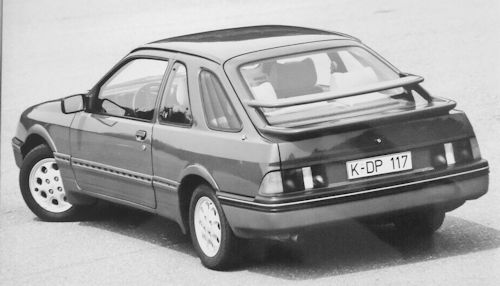